Tonight's presentation on pension reform drew a crowd of 30. JoAnne Golden of the San Diego County Taxpayers Association presented after an introduction by Joe Sheffo, President of the Encinitas Taxpayers Association. The crowd was generally age 30s to 60s, with better representation at the upper end of that spectrum. Judging by the questions, they were well-informed and universally understood the problem and supported reform. Even some older hippie-looking types asked some quite sophisticated questions about the unrealistically rosy assumptions built into the pension model. If only we could pick five of these folks at random to replace the city council.

SDCTA has lots of resources and papers on their web site, but I'll sum up the presentation here. Encinitas city employees can retire at 55 and get paid essentially a full salary for as long as they live. That is completely out of line with private-sector, real-world benefits. You'd have to build a 401(k) in the millions by the time you're 55 to match that kind of cheese. And that's before we even get into paying for their health care for life. These massive benefits are a huge and growing drain on city resources.

Our city council doesn't understand this at all. Pension reform is not even on their radar screen. In fact, the last time they addressed pensions, they voted 4-1 to increase benefits 35%! Three [Four] of our current council members were on that council, with Maggie Houlihan and Dan Dalager [and Jerome Stocks] voting for the huge increase and only Bond being the voice of reason against. 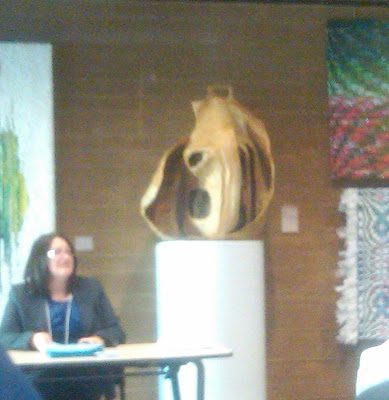 JoAnne Golden tells it like it is under the watchful gaze of Jar-Jar Binks.

Toward the end, someone asked what citizens could do to help bring about reform. Golden's answer was to keep up the pressure on your city council members. Make sure they know that the pension time bomb is important to voters.

SDCTA's modest reform proposals are here. A couple people in the audience asked about advocating for defined contribution plans, but SDCTA has chosen a pragmatic, incrementalist approach of advocating modest reductions within the current system. Any reforms would apply only to new hires, as once Dalager and Houlihan [and Stocks] gave current employees those gold-plated pensions, they became protected by law and can never be taken back without the city filing for bankruptcy.
Posted by W.C. Varones at 7:27 PM No comments: 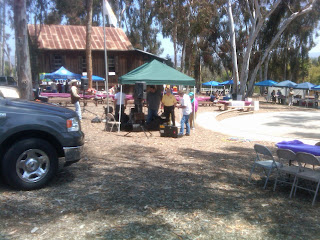 Last week to get $8000 of government cheese to step in to the rat trap of homeownership.
Posted by W.C. Varones at 7:50 AM No comments:

I am amazed at how quickly the general public is catching on to the deadly serious but somewhat arcane public pension issue. People's attention spans don't usually go beyond issues that can be summed up in provocative catch phrases: "blood for oil," "death panels," etc.

Yet the public is catching on, and a backlash is growing against the public employee unions that are bleeding the taxpayers dry. We love teachers, firefighters, police, and state bureaucrats (OK, not the last group), but there's a limit to the pensions and benefits we can pay for. State workers used to accept lower salaries in exchange for job security and a reasonable pension. Now they get higher salaries than private sector workers, on top of gold-plated pensions and benefits.

Jerome Stocks is not expected to attend.
Posted by W.C. Varones at 7:58 PM 2 comments:

A vote on a proposed planning document for the coastal community of Cardiff was postponed Wednesday after a majority of the Encinitas City Council questioned whether the plan would place too many restrictions on development.

"It's not my intention to diminish your good work or to redesign this tonight," Councilman James Bond told supporters of the proposed Cardiff-by-the-Sea Specific Plan. "I just don't want us to end up with some unintended consequences."

Fellow Councilman Jerome Stocks and Mayor Dan Dalager said they had questions that would require additional city staff review of the document, which proposes special development restrictions in the Cardiff area.

Teresa Barth abstained due to a conflict from her ownership of a Cardiff property.
Posted by W.C. Varones at 5:06 AM No comments: 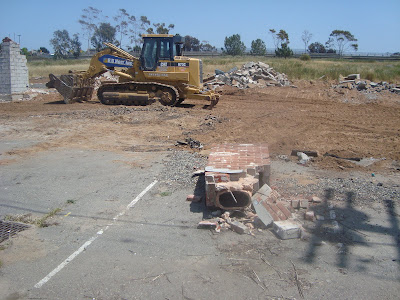 Other than the bulldozing, nothing's happening yet. 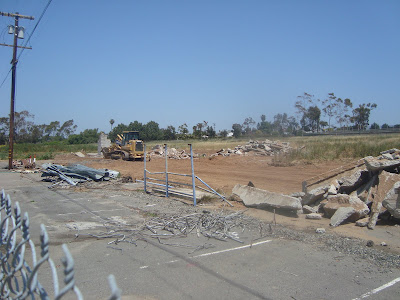 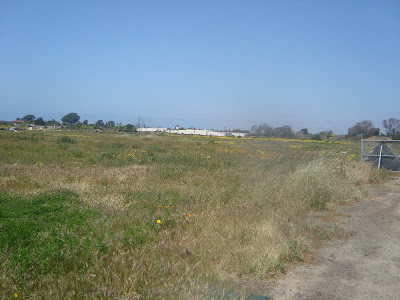 This is a view from the south end at Somerset looking north. That's the back of Santa Fe Plaza at the other end of the field. 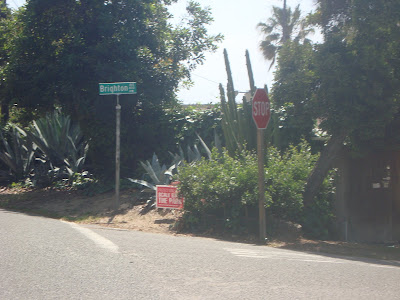 A few months ago, there were a lot of these "Scale back the park" signs along Rubenstein on the west edge and Somerset to the south. Now only a couple remain along Somerset. I think the web site referenced on the signs is defunct. 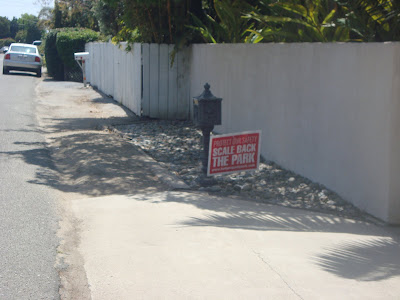 Judging from the signs, I thought these people on Somerset were screwed. Their street is the only current access to the property from the south, and their quiet little neighborhood would get a ton of traffic. It turns out the plan is to run a new access road behind the neighborhood, next to the freeway. You can see the site plan here. There will be a 6' concrete wall around the park to keep the park riff-raff out of the 'poser district. The only other access will be from the north, just west of Santa Fe Plaza.
Posted by W.C. Varones at 7:30 PM 3 comments: 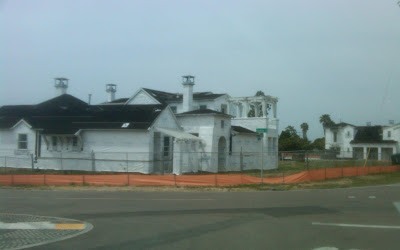 The bankrupt Barratt American development in northern Leucadia. Still looks pretty much the same as it did a year and a half ago, though the Tyvek's not as shiny and bright any more.

This is also the place where somebody paid $810,000 for a house that can't be lived in. The city withheld the certificate of occupancy until the builder built a low-income housing unit, and the builder never did.

The September 2008 Voice of San Diego article calls the neighboring first phase "$2 million luxury homes." I'd be really surprised if the new houses go for more than the low $1m range if they're ever finished. The only recent sale in that price range and area is 442 Hillcrest at $1.65m, and it's a nice big new house on a big lot with great ocean views. I don't think anything in Rancho Tyvek will have much of an ocean view.
Posted by W.C. Varones at 3:04 PM No comments:

A cool ride and the Breakfast of Champions 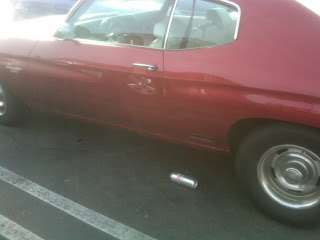 Sounds like there's a lot of bad blood on the City Council.

Sure would be nice to know what's in that envelope:

"I believe that this City Council must daylight these reports so that the press and the public can see what one council member ... unilaterally has insisted we squander taxpayer dollars on in her attempt to intimidate, harass and silence Mayor Dan Dalager and me," Stocks said, as he held up a large envelope marked "confidential."

Stocks said that his envelope contained two privileged attorney-client reports that he couldn't release unless the council as a whole agreed to do so, and then he got permission from others on the council to place the issue on a future agenda. His request came during the final moments of Wednesday's council session when council members typically give informal reports on recent events they've attended.

Speaking by telephone after the meeting, Barth said Stocks was engaging in an election-year publicity stunt. Barth and Dalager's seats are both up for election this year.

"He's just trying to bully me," Barth said, adding that she has no problem with having the reports released. "I welcome a full, public discussion about the issues I raised."

Would somebody with some inside info please spill the beans?
Posted by W.C. Varones at 11:44 AM No comments: 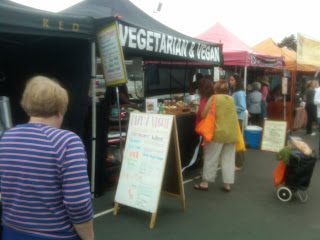 Just over a year ago, Juan Carlos Balderas, 21, who police said was a documented Encinitas gang member, was shot dead in a downtown Carlsbad park.

But not by rivals, prosecutors say. In the heat of a fight with Carlsbad gang members, Balderas was accidentally shot by members of his own gang, who had invaded enemy turf looking for trouble, according to prosecutors.

I'll be honest. I've lived in this area on and off for 20 years and I never knew Encinitas even had gangs. But I was overseas when this happened.

Encinitas' only documented gang, in existence at least 40 years, has historically been linked to an area south of Leucadia Boulevard and east of Interstate 5, as well as some patches of the city farther south.

However, many of the younger gang members appear to have been priced out of their traditional turf and moved to other North County cites, Encinitas detectives say.

A list of San Diego County gang injunctions is here, with none apparently closer than San Marcos.
Posted by W.C. Varones at 7:30 PM 77 comments: 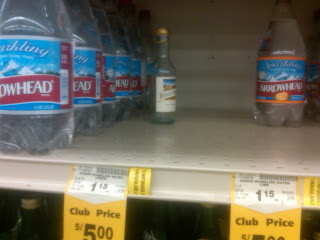 I don't think it's supposed to work that way.
Posted by W.C. Varones at 3:44 PM No comments:

The Coaster is a nice idea, but totally useless unless you're a 9-to-5er who happens to work downtown. Weekend runs are so few and far between (and expensive) that you're better off driving. And God forbid you want a night out on the town -- Coaster don't run past 7pm.

Until now. The Coaster has just added new Friday and Saturday night service leaving downtown at 10:45 and arriving in Encinitas at 11:26. Enjoy -- I will!
Posted by W.C. Varones at 3:31 PM 2 comments:

Man bites his married girlfriend, runs over her husband.

Switchboard and Zabasearch show no James Meadows as a resident of Encinitas, so he may have just been passing through.
Posted by W.C. Varones at 9:11 PM No comments: