Rumors are swirling that the long-promised Whole Foods Market may not be opening in the Pacific Station development. The opening was announced back in November 2007:

A notice issued Thursday by Whole Foods says a 25,000-square-foot store will open at Pacific Station, a planned center on South Coast Highway 101 at F Street.

The "mixed-use" project proposed by developer John DeWald calls for two three-story buildings, a two-story restaurant and two levels of underground parking on the 1.39-acre lot between E and F streets.

Construction is expected to begin in the spring and last 14 to 18 months, DeWald said Thursday.

"We are thrilled to be opening our third San Diego store in Encinitas, a community that embodies the health-conscious lifestyle that Whole Foods Market caters to," spokeswoman Marci Frumkin said in a statement.

As recently as this past April, Downtown Encinitas Main Street Association said, "Construction has topped out on the project and work is continuing towards completion this summer. The retail tenant build outs including Whole Foods should be commencing soon."

So why are there no Whole Foods signs going up even as finishing touches like the "Park" sign and building address go on the exterior?

Encinitas is still listed as "in development" on Whole Foods' web site. An e-mail to a Whole Foods spokeswoman was not returned as of the time of this post. A A phone call to an employee at the Whole Foods regional headquarters revealed that there was no firm opening date, but plans are for a Spring 2011 opening.

The developer has posted a "Notice of Non Responsibility" in the window naming Mrs. Gooch's Natural Food Markets as the tenant. This is a standard form that landlords post to avoid responsibility for construction bills that are owed by the tenant. Mrs. Gooch's is the southern California subsidiary of Whole Foods, so on the surface, Pacific Station still believes Whole Foods is coming in. However, the notice was dated April 2010, and there appears to be no work going on inside the building.

It's certainly possible that Whole Foods is getting cold feet. Construction has taken longer than planned, and the economy is a lot shakier than it was when the store was originally planned. It's also possible that Whole Foods still plans to open the store, but is renegotiating a better rent rate. And Del Mar is also on the development list. Maybe Whole Foods is playing the two locations against each other to get the best deal.

AOL is going local with its Patch.com subsidiary, a sort of online newspaper / community forum. Encinitas' Patch is off to an impressive start under the leadership of young and enthusiastic Jennifer Reed, a recent transplant from Missoula, Montana.

Patch is what community blogs should be, except that most community bloggers have day jobs. Patch gets around that little issue by paying its staff. It's got a lot of potential to do things that are difficult for local blogs because of its resources and media connections.

Of course, being advertiser-supported means Patch won't be able to do a lot of things we love the local blogs for: muck-racking, yellow journalism, libel, and obscenities.

I think the existing local media, including the Coast News and North County Times, do a pretty good job of covering local issues, and blogs like the Leucadia Blog are indispensable for issues too controversial and politicized for mainstream papers. I welcome Patch into the mix and hope they'll play a significant role in the coverage and discussion of issues important to Encinitas' future.
Posted by W.C. Varones at 4:08 PM 2 comments: 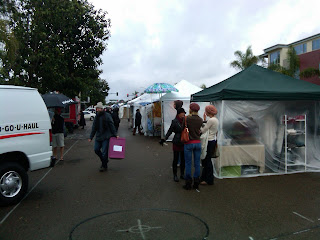 Come on down! Brave souls are here now, and the weather is supposed to clear up by noon.
Posted by W.C. Varones at 10:55 AM 1 comment:

If you care about the future of Encinitas, speak up now.

These meetings are run by city staff and consultants who want affirmation for what they want to do to Encinitas. For example, the most common and emphatic point coming out of the last round of meetings was that citizens "want to preserve the unique character of our communities." Some on the city council have twisted this to mean that we want 90-foot stadium lights drowning out Cardiff sunsets.

That was my reaction to the 4-0 city council decision to deny EUSD's request to re-zone Pacific View Elementary for McMansions.

Surprise that Dan Dalager would recuse himself over a financial interest conflict.

Surprise that Stocks and Bond finally found a development they didn't like.

The city council has painted itself into a corner with massive pension liabilities so that they need the new tax base that new development brings. That was Dalager's plan all along: make his city worker buddies rich with outrageous pensions, and then pay for it by letting his devloper buddies develop everything in sight.

The EUSD, for its part, was trying to follow the Schwarzenegger death spiral plan of selling assets to fund operating budgets. This just after persuading voters to take on 30 years of debt to fund a few years' worth of technology.

Have we turned a new page? Will we get more reasonable development and real pension reform? Much hinges on the unknown new council member Kristin Gaspar. Kristin, are you with us or are you against us?
Posted by W.C. Varones at 4:06 AM 4 comments:

The debate over plans to expand Interstate 5 has prompted a state senator to get involved.

On Monday, Sen. Christine Kehoe hosted a town hall meeting so CalTrans and other agencies involved in the expansion could clarify the five different options ranging from doing nothing to widening I-5 to 14 lanes.

"The impacts are huge. The benefits are minimal at best," said Oceanside City Councilmember Esther Sanchez.

When asked if there was an option she was in favor of, Kehoe said, "I don't think so."

Kehoe said she and her constituents still have a lot of questions about the proposed project, which would cost about $4 billion.

Many residents said they want the money spent on mass transit instead of traffic. This includes a group called I-5 PLAGUE, which stands for "Prevent Los Angeles Gridlock Usurping Our Environment."

"L.A. has been expanding freeways for 40 years and they still have gridlock for seven hours every day," said PLAGUE spokeswoman Noel Spade.

The public has two more weeks to comment on the environmental impact report.

Solana Beach and Oceanside seem to be taking the lead on this. Teresa Barth is involved, but without support from the council majority.

If you care, contact PLAGUE for how to submit comments to CalTrans.
Posted by W.C. Varones at 4:39 AM No comments: 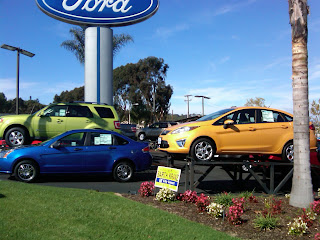 Public hearing on I-5 expansion Monday

This isn't a silly little community meeting, either. It's a state Senate Committee meeting, complete with state Senators, CARB, and CalTrans officials.

Be there if you care.

Jane Twining-Blair and the developers succeeded in purchasing the swing city council seat for airhead Kristin Gaspar, who has no positions and no knowledge of anything other than that she wants to put 90' stadium lights in Cardiff. The Jerome Stocks 3-2 union-developer majority is preserved.

The best government money can buy.
Posted by W.C. Varones at 7:42 AM 3 comments:

How low can they go? 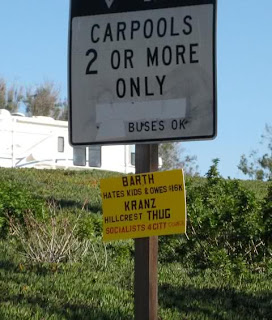 Bonus question: if Barth and Kranz are the socialists, then why are the taxpayers supporting them and the public employee unions supporting Dalager and Gaspar?
Posted by W.C. Varones at 5:12 PM 5 comments:

Everyone reading this already has his mind made up. You're either a hardcore Dalager/Gaspar supporter, or a hardcore Barth Kranz supporter.

So we're not going to change any minds among the informed. But you could still call a few of your less engaged friends and neighbors and fill them in.

A few parting links, then good luck to all for the election.