A 44-year-old man was killed Friday afternoon while lying near some bushes in an Encinitas parking lot when the driver of an SUV plowed through the shrubbery and struck him, authorities said.

It happened just before 3:45 p.m. in the parking lot of Enterprise Bank & Trust on North El Camino Real about a half-mile north of Encinitas Boulevard, according to San Diego sheriff’s Lt. David Collins.

Sheriff’s officials said the victim was lying on some grass on an embankment that was below and out of sight of the parking lot when he was struck. He died at the scene.

It was unclear why the SUV’s driver, a 61-year-old woman, drove over the curb and through the bushes.

Sheriff’s officials initially said deputies arrested her on suspicion of driving under the influence of alcohol. But a news release several hours after the crash said investigators had not “yet determined if alcohol or drugs were a factor.”

The developer of the luxury Alila Marea Beach Resort won Encinitas Planning Commission approval Thursday for a project next door that will include apartments, hotel rooms and restaurants.

The 3.79-acre project site, which is just south of the hotel on N. Coast Highway, is proposed to contain 94 apartments, of which 19 will be set aside for low-income people. There’s also a 34-unit hotel that will be connected via bridge to the existing Alila Marea Resort. Some of the apartments will be built over a parking structure, others will be above commercial space. Jackel said the commercial areas could contain everything from an ice cream shop to high-end restaurants.

Posted by Encinitas Undercover at 9:36 AM 104 comments: 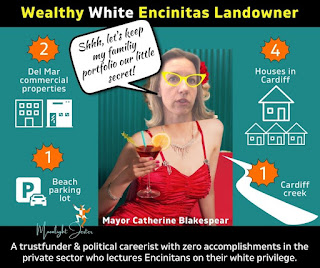 Posted by Encinitas Undercover at 8:38 AM 105 comments:

The county agency reported receiving by a May deadline 141,326 signatures, a 3 percent sample of which were counted. The number of projected valid signatures was 94,787, falling short of a needed 115,788 signatures, or 10 percent of countywide votes cast in the last gubernatorial election.

Challengers likely to split vote and elect Kranz for mayor

Jeff Morris and his wife Kim alleged over the past few days that mayoral candidate Cindy Cremona deleted and blocked Jeff Morris’ political posts on the Nextdoor app. Escalating their accusations with increasingly extreme language over the past 72 hours, they posted their claims extensively on social media.

Here are the facts:

1.) Cremona as a “Welcome Team” member has no delete authority, in writing, per Nextdoor. From Nextdoor support: “Leads do not have the ability to remove neighbors, or otherwise affect a neighbor’s account in any way. Only Nextdoor’s Support team can take those actions."
2.) Jeff claims he spoke by phone with Nextdoor support to prove his claims. It is highly unlikely that he spoke with them; he needs to prove his claims in writing
3.) Jeff’s photoshopped screenshots do not constitute proof of his claims. This is hardly the first time Morris has made a baseless claim.

He needs to stop hiding behind his private social media sites and put his proof out here in the open. In other words: put up or shut up.

For the uninitiated, Cremona and Morris are both running for mayor as outsiders against the current council majority. Councilman Tony Kranz is the Blakespear ally, status quo candidate.

Cremona is involved with the Encinitas Viewpoint forum, which has a lot of overlap with the Prop A community character folks. Jeff Morris is more of an independent firebrand, and has pointed a spotlight on the city's homeless encampments with his Encinitas Watchdog group.

Best guess is Cremona is the stronger of the two challengers by a wide margin, and splitting the vote only helps elect Kranz.
UPDATE: Morris’s claims of Cremona’s supposed Nextdoor moderation appear to be unfounded: 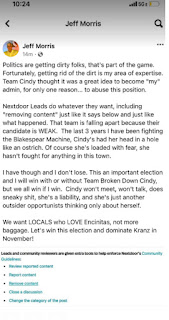 Rules are for the little people.

According to section D of Chapter 2.30.020 of the city’s Municipal Code, “Appointees to any city commission will not be selected from among members currently serving on any other city commission.”

However, the council on May 25 voted 4-1 to appoint Prendergast, a real estate businessman also serving as a member of the city’s Mobility and Traffic Commission, to become the new Olivenhain representative on the Planning Commission. 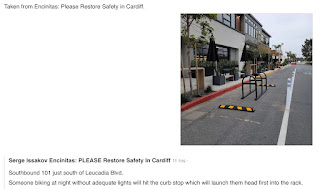 And certainly millions more will be paid to the family of Dr. Jennings Worley, who was killed at the Blakespear council’s ill-conceived traffic bollards on Leucadia Boulevard.

And let’s not forget the dozens of injuries, several requiring ambulances and hospitalization, from the Blakespear road obstacles between Cardiff and Solana Beach. Lawsuits remain pending.