Occupy Encinitas is back today at noon at 101 & Encinitas Boulevard. The first one, a couple weeks ago, had a good turnout of at least a few hundred. It was the only Occupation in North County that day, and drew people mostly from outside of Encinitas. Today's is likely to be smaller because there are five Occupations from Del Mar to Oceanside.

The Occupiers have a legitimate grievance. Wall Street made themselves filthy rich, crashed the economy, and then got bailed out at our expense (don't believe the "TARP was repaid" canard -- TARP is trivial compared to the trillion-plus dollars printed out of thin air by the Federal Reserve to lend to the banks at 0%). The new crony capitalism literally is privatized profits and socialized losses, and the banks get away with it because they own the politicians of both parties with very few exceptions (Dennis Kucinich and Ron Paul being among the few). I've written more about this here.

Unfortunately, the Occupiers' legitimate message is being drowned out by the crazies. A small minority of mentally ill, druggies, thieves, racists, etc., is causing some problems, but that's to be expected in any large group. The bigger issue, though, is that a large plurality if not majority of the protesters are radical leftists who don't just want to stop fraud and corruption on Wall Street and in Washington, but want to smash capitalism completely. Calls for free education and a government living wage for all are monumentally naive fantasies of unlimited resources in a very resource-constrained world. These dreamers don't know it, but destroying free enterprise would make things a lot worse for everyone. I've been to the Occupation, and unfortunately, many participants appear to have similar utopian socialist dreams.

Wall Street is crooked, as are its lackeys in the Treasury Department, the Federal Reserve, and Congress. You don't have to be a Marxist to want to change that. The problem is not capitalism, it's crony capitalism.

California Gov. Jerry Brown on Thursday unveiled what would be one of the nation's widest-reaching pension overhauls, a proposal that would raise the retirement age and shift more investing responsibilities to public workers.

Encinitas labor groups don't have anything to worry about. Their bought-and-paid-for councilman Jerome Stocks, who voted to spike city pensions by 35% in 2005, is still stonewalling Teresa Barth's attempts to get pension reform on the Encinitas council agenda. And now it looks like he's about to appoint his longtime crony and union dream candidate Mark Muir to give the unions an even bigger council majority.

Rumor is the council majority wants to appoint a huge Jerome Stocks crony.

A large public turnout this evening, and at next week's appointment vote, might be enough to dissuade some council members from going along with that. 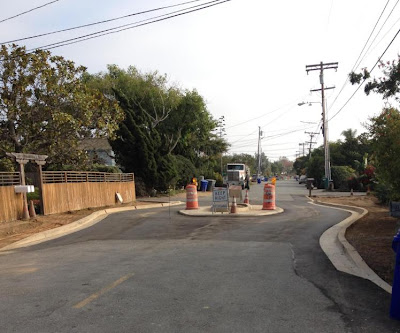 That's going to look a lot nicer than those hideous and annoying-at-any-speed plastic bumps on Devonshire. 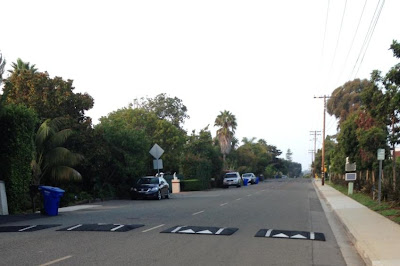 Summit has also been torn up for several weeks now, likely for similar calming circles. 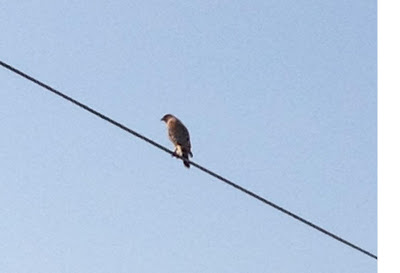 This fellow seen in coastal Encinitas is likely a red-shouldered hawk according to birdwatchers working from a grainy photo.

Your Encinitas Council appointment candidates are...

I'm guessing the Council majority won't honor Maggie's wish by appointing Shaffer, who would oppose them on most issues.

And "the Judge" could be too much of a wild card and upset business as usual.

So I think the Council majority will pick one of the senior citizens. I hope whoever that senior citizen is won't be persuaded to join a 4-1 super-majority for upzoning.


The Encinitas Union School District is coming under increasing scrutiny for financial mismanagement.

In today's Patch, we learn that the the EUSD is running a $5 million deficit before taking into account the likely December cuts from the state. It is utterly irresponsible to run a huge deficit even under the unrealistically optimistic June budget scenario and then risk making drastic cuts mid-school-year.

Fiscal irresponsibility is a recurring theme at EUSD. Recall that this is the same district that swindled Encinitas voters into taking on 30 years of debt so they could buy iPads for 4th-graders.

But EUSD management is willing to do more than mortgage our future for a little technology bling. They also want to strip the community forever of an irreplaceable prime asset in order to fund current bloated operating budgets. The Leucadia Blog explains the history of the Pacific View site that EUSD wants to sell to the highest-builder.

Most of the property was gifted to our community in 1883 by one of the early town founders, J. Pitcher. Over the last 128 years the remainder of the property has been meticulously deeded down through several generations until it was finally deeded to EUSD in 1964. It was a gift. There was lots of land available in Encinitas in 1883. These town founders were very particular about this special site on top of the bluff overlooking the Pacific Ocean. They wanted it for the community and its children.

Finally, anonymous commenters at Encinitas Undercover have lots of info (unverified, but believable) on this post, including free preschools for revenue, a sweetheart deal for a Vista farmer, and Tim Baird's background in Ojai.


Occupy Wall Street is moving to a new phase as The Man attempts to evict the Occupiers tomorrow.

Meanwhile, in little old Encinitas, some West Coast Occupiers will be gathering in sympathy:

The Occupy Wall Street movement against corporate greed is coming to North County, starting Saturday in with an event in downtown Encinitas.

It's set to start at 1 p.m. at the intersection of Encinitas Boulevard and Coast Highway 101. Anyone is welcome and organizers encourage people to show up with signs and American flags.

"We're planning to march into downtown and we're planned to stay on the sidewalks," said publicist Dave Peiser, a longtime Encinitas resident who runs a computer tech company and an online environmentally friendly products website. "We don't want to get in the way of anyone."

Unlike the Occupy event in New York City, where participants have camped out for weeks to protest corporate greed and the concentration of the nation's wealth in the hands of a few, the Encinitas event will end after the march through downtown.

"There's no encampment planned," Peiser said. "The hope is just to bring the message to North County."

What more could you ask in laid-back Encinitas?

I have a feeling the organizers are the same people who are out on 101 at Encinitas Boulevard on lots of weekend afternoons waving signs for various lefty causes. But they're likely to get a much bigger turnout Saturday with the media publicity from the national #Occupy movement.

For locals who want to go Full Occupy, you can still join Occupy San Diego, where they're camped out at the Civic Center, tents and all. Don't eat the brown acid.


How's this for a Friday afternoon news dump?

EUSD Superintendent Tim Baird, who recently got Encinitans to take on 30 years of debt so he could give iPads to 4th graders, is now suing the city of Encinitas because the council won't upzone Pacific View to turn it into high-density condos and maximize the school district's profit on the sale.

Baird thinks state law requires cities to upzone properties to match the surrounding neighborhood (i.e. from public use to high-density residential). The council thinks it's not that clear-cut. Unfortunately, the city's attorney is Glen Sabine, the genius responsible for both the Barth harassment debacle and the road report fiasco.

A Saturday morning of shopping turned into an emergency hazmat situation at a Baltimore Walmart where two patrons threw bleach and disinfectant at one another, officials said.

Baltimore County Police responded to a call at about 10:48 a.m. Saturday and found two women fighting inside the store.

Fire, EMS and hazardous materials units were dispatched to the scene, as well as 10 medics.

Police have arrested Theresa Monique Jefferson, 33, after she turned herself in to authorities, according to the Associated Press.

She has reportedly been charged with first-degree assault, second-degree assault, theft under $100 and malicious destruction of property. She is being held on $350,000 bail.

The brawl was a result of an ongoing dispute between Jefferson and the victim because the victim's boyfriend is the father of Jefferson's child, according to the AP.

Police spokesman Shawn Vinson told the Washington Post that Jefferson initiated the attack when she followed the victim into the store.

For Walmart's part, "this is obviously not the type of behavior we would expect from people at our stores. We apologize for any inconvenience this caused to our customers," the spokeswoman said.

Walmart closed the store for several hours to clean and ventilate it.

Those Toxic Avenger houses on Hymettus are selling like hot yellowcake.
From Jim the Realtor:
Posted by W.C. Varones at 7:29 AM No comments:

Things that make you go hmmm... 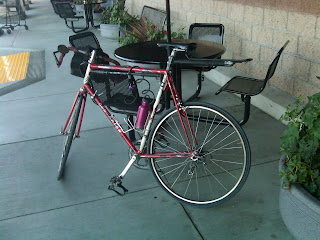 What kind of corporate shit-for-brains does a major remodel on a Vons grocery store in one of the most health- and environment-conscious communities in the U.S. and doesn't even install a single bike rack?
Posted by W.C. Varones at 8:12 PM 4 comments: 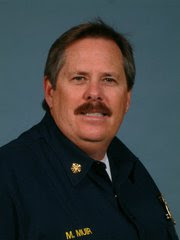 The grapevine is abuzz with talk of Fire Chief Mark Muir wanting a city council seat. It's no secret. He's long been eyeing political office after he cashes out from the Fire Department with his six-figure pension.

Muir is a well-known political ally of Jerome Stocks, and if the Stocks majority wants to put Muir in Maggie Houlihan's seat, well, they have the votes to do it. The only thing that might stop them is that they fear public backlash.

Will you be there at tonight's special council session? 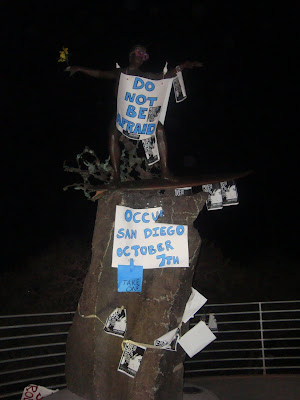 I fully support the motivation behind #OccupyWallStreet, to hold accountable the dirty banksters, the crony capitalists, and the Dirty Fed who destroyed our economy. But it looks like these kids are a little bit clueless about who the bad guys are. 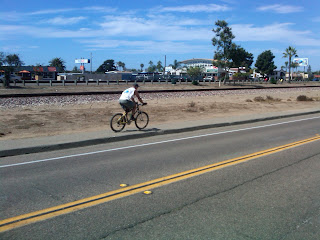 In recent years, the City of Encinitas has discouraged cycling by allowing vicious goat head thorn weeds to grow along the 101 and Vulcan bike paths.

Thanks to the efforts of Leucadia local Russell Levan (and possibly other public or private groups unknown), the puncture paths appear to have been largely cleared of weeds. Encinitas Undercover operatives have walked long stretches of the puncture paths without seeing the weed or getting thorns in their soles. And now, like the flies returning to Del Mar, bicyclists are returning to the bike paths.
Posted by W.C. Varones at 12:51 PM No comments: