A handful of protesters rallied outside Encinitas City Hall on Wednesday to demand the city restore civil liberties and end what they called the "police state."

The protest was led by Alex Fidel, whose Facebook page says he is running for mayor. Fidel claims Encinitas and other cities get money from the Department of Homeland Security which they use to "beef up" police and fire departments.

"And it doesn't come for free. It comes with strings attached," said Fidel, who claims one of those strings is police militarization. "We don't want our children to grow up in a war zone on their streets."

Fidel used an incident from last year as an example. In that situation, a young man shot and injured two San Diego County Sheriff's deputies who were investigating a stolen car.  Within minutes, the neighborhood filled with police from several surrounding agencies.  The SWAT team was called in, and hours later, 22-year old Evan Kwik turned the gun on himself.

Fidel said there might be criminal neglect on the part of deputies for not calling in the psychiatric emergency response team, which is trained to deal with people with mental health issues.

If what's alleged is true, Kydd is guilty of some really sloppy rookie mistakes.  He allegedly created his own political action committee to spend less than $5000 of his own money on ads in his own newspaper, and failed to include the correct disclosures and file the right paperwork about it.

Moral of the story: don't bring money into politics unless it's Big Money, and you have high-priced advisers to make sure you do everything by the book.

UPDATE: Here's some background on Ken Moser, who the U-T named as being behind the complaint. He seems to be something of a career litigant:


Moser, a Republican, does have a litigious history. He’s been a part 163 lawsuits during the last 15 years, most in small-claims court. He’s filed suits against former City Councilmember Scott Peters, City Council candidate Tom Behr and San Diego Community College Trustee William Schwandt, all Democrats. Moser said most of the cases he’s filed were against companies that spammed his fax machine and that he’s won 95 percent of them.

Moser was an unsuccessful candidate for San Diego City Council in 1991.
Posted by Encinitas Undercover at 4:15 AM 110 comments:

While you were Strategic Planning...

Just because you ignore it, doesn't make it go away:


Actuaries at the California Public Employees’ Retirement System say the pension plan needs a rate hike to account for the fact that retirees are living longer. The pension plan’s board will take up a proposal to increase the annual payments from public employers at next month’s meeting. The new longevity calculations would not kick in until 2016-17, and phase in over five years. The revised formula would eventually require cities and counties to pay as much as an additional 9.3 percent of payroll each year, depending on the level of perks. That amount would be in addition to the 24 to 41 percent of payroll a typical local government would already be paying at that point.

Such increases have huge fiscal consequences for local governments. Sacramento’s city finance director told the pension system’s board last month that the proposed longevity rate hike would cost the city an estimated $12.2 million annually by the end of the phase-in period — the equivalent of 102 full-time positions. Riverside estimates that its annual pension costs, about $52 million this year, will increase by as much as $30 million under the rate hike the pension plan approved last year. A higher cost for longer-lived retirees will only add to that mounting expense.


A fired executive of Chicago's beleaguered red light camera company alleges in a lawsuit that Redflex Traffic Systems doled out bribes and gifts at "dozens of municipalities" in 13 other states and says he is cooperating in an ongoing federal investigation.

The explosive allegations, accompanied by few specifics, suggest investigators may be examining Redflex's business practices around the country in the wake of the company's admission last year that its flagship camera program in Chicago was likely built on a $2 million bribery scheme.

Redflex got the contract with Encinitas to install red-light cameras in 2004 despite there being very few collisions, and almost no serious injuries, at the two intersections on El Camino Real.

The current city council voted unanimously to keep the contract with Redflex despite the city's own data showing very little impact on the already low accident rate, and despite dozens of other cities deciding to ditch the controversial program.

The program collects negligible revenue for the city, but takes more than $1 million per year out of the local economy and sends it to San Diego County, Sacramento, and Redflex.
Posted by Encinitas Undercover at 5:40 PM 134 comments:

Big breaking story in the U-T:


The owner of a Washington, D.C.-based campaign firm and a former San Diego police detective are accused of conspiring with a foreign national to illegally inject more than $500,000 into San Diego political races, including the 2012 mayoral contest, according to the U.S. Attorney’s Office. Ravneet Singh, 41, founder of ElectionMall Inc., was arrested Friday by FBI agents and is charged alongside his company and Ernesto Encinas, 57, the former detective, with conspiracy to commit offenses against the United States. According to Tuesday’s complaint, Singh and Encinas helped a Mexican businessman donate hundreds of thousands of dollars to San Diego candidates. Under federal law, foreign nationals are prohibited from making contributions to election campaigns in the United States at any level. [...] The complaint identified the political candidates involved only by number — 1 through 4. A confidential source close to the investigation told U-T San Diego that Candidate 1 is San Diego County District Attorney Bonnie Dumanis, Candidate 3 is former Mayor Bob Filner and Candidate 4 is former mayoral contender Nathan Fletcher.

It's doubtful that Dumanis, Fletcher, and Filner will be prosecuted. They likely have plausible deniability that they didn't know anything about the illegal contributions. But it's certainly interesting which politicians the businessman thought would be worth investing a lot of money in. What did he expect to get in return? Dumanis was notoriously soft on corruption in the case of Encinitas Mayor Dan Dalager, giving him a slap on the wrist for the kitchen appliances, and failing to prosecute entirely the more serious issues of the undisclosed six-figure loan and the California Community Bank "consulting" deal. UPDATE: The LA Times identifies the illegal donor as Susumo Azano, a Mexican citizen living in Coronado. Internet searches show Azano to be in the business of homeland security technology. The Times reports that the plotters wanted to replace Police Chief Bill Lansdowne with their own choice, presumably to approve contracts for Azano.
Posted by Encinitas Undercover at 8:13 AM 56 comments:

You may recall that in June, the Encinitas City Council unanimously voted to force hotels to turn over their guest records to police without a warrant. Council Member Tony Kranz expressed reservations about privacy and intrusiveness at the time, and in July the Council voted to hold off on the proposal. Solana Beach had such a law in place, as did many other cities in California.

The Ninth Circuit Court of Appeals just threw the law out.
Posted by Encinitas Undercover at 8:39 AM 17 comments:

Latest at the Coast News.

The district believes the property could be rezoned to accommodate housing, making it even more valuable. With Proposition A passing this summer, some residents have argued a rezone request would have to go to a public vote. Baird said district attorneys believe a rezone request couldn’t be denied; the state’s education code overrules Proposition A, a local ordinance. He added that the education code guarantees school districts the right to develop unused property based on the zoning of the adjacent area. In the case of Pacific View, that’s R-15 residential zoning, he said. “We think the code is pretty clear,” Baird said. At its special meeting on Jan. 15, the City Council asked for a report back Jan. 22 with an opinion from the city attorney on whether the property could indeed be rezoned for residential housing.


The city of Encinitas and contractor USS Cal Builders are negotiating with the state Regional Water Control Board to try to reduce a $430,000 fine levied against them for twice letting sediment-filled storm water flow off a huge city park construction site and into San Elijo Lagoon.

If the city and the construction company can't convince the state to lower the fine, they will be splitting the cost of the $430,000 assessment, with the city likely owing the lion’s share of the bill, city officials have said. The fine is broken into two categories, with part dedicated to the two incidents and part linked to the city’s failure to significantly improve conditions between the first and second offense.

The runoff incidents occurred within four months of each other at the 44-acre park site, which is west of Interstate 5 and south of Santa Fe Avenue.

The public was kept in the dark about the whole thing until late November when a resident learned about it from the water board, almost a year after the first spill. How's that Transparency and Trust™ working out for ya?
Posted by Encinitas Undercover at 4:16 PM 59 comments:

Allied Van Lines moved 37 percent more families out countywide than in last year, down from 43 percent net emigration in 2012. U-Haul officials, who observed 5.9 percent net immigration to the city of San Diego in 2012, said this reversed last year to 1.6 percent more customers moving out in 2013.
[...]
One troubling statistic is the exodus of families leaving just before their peak earning years — taking their children with them.
From 2000 to 2012, San Diego County lost 5.6 percent of its population in the age group from 30 to 44, according to state figures.
The causes boil down to the usual suspects: High cost of living, particularly for housing, combined with lackluster job creation outside of low-paying tourism or high-paying technology sectors.

The SANDAG economist's answer is to build more houses, obviously.
Posted by Encinitas Undercover at 6:39 AM 88 comments:

The Encinitas school district is putting its seaside Pacific View school property up for auction, after the district’s board of trustees rejected a $4.3 million purchase offer from the city, Superintendent Tim Baird said Friday. “Maybe that’s all (the city of Encinitas) can afford to pay, but the district … has to get a fair price for our property,” Baird said as he described the board’s decision, which occurred during a special closed-door board meeting Thursday night.

The property was donated by a benefactor in the early days of Encinitas for the benefit of future generations of children. The EUSD will blow through the paltry few million it fetches within a year or two.
Posted by Encinitas Undercover at 5:58 PM 193 comments:

And this is how it is done. Land zoned for 6 houses becomes 10 houses.
Posted by Encinitas Undercover at 5:47 PM 164 comments:

While Prop A got most of the attention last year, Desert Rose was another case where the new city council sided with staff and developers against residents. They overturned a Planning Commission decision and decided to impose high-density development on the quiet Olivenhain neighborhood of Desert Rose.
But the residents are fighting back. San Diego Reader has the update.

Posted by Encinitas Undercover at 6:02 AM 198 comments: 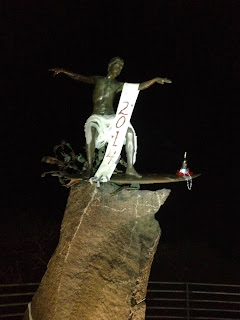 Anarchy has its rewards 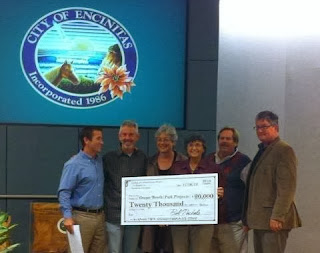 This photo, from the Facebook page of Surfing Madonna artist Mark Patterson, appears to be a check for $20,000 for the city's beach and parks projects from the proceeds of the first Surfing Madonna Run.

The Surfing Madonna volunteer art was condemned by former mayors Jerome Stocks and James Bond as illegal and unwelcome.
Posted by Encinitas Undercover at 5:27 PM 57 comments: