Exactly two years to the day since the infamous Lincoln Club hit piece, which came four days after a $4000 payment from Jerome Stocks to the Lincoln Club, we get this. 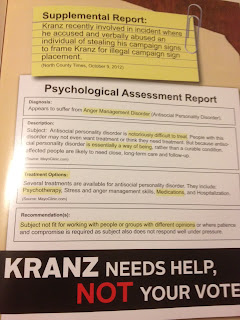 If a smear campaign like this can buy control of city council, we're all in deep trouble.
Posted by W.C. Varones at 8:15 PM 19 comments:

Who will upzone my greenhouse so I can build high-density apartments? 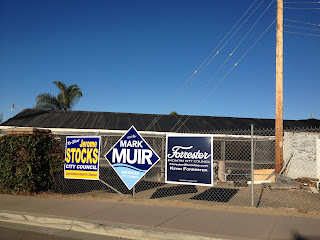 Pay to play in Encinitas

Dennis Lees discovers that Carlsbad firm O'Day Consultants and its employees gave Mayor Stocks $2000 to pay off campaign debt after the firm received a $77,000 city contract.

If your local newspaper isn't covering this stuff, it's not a "Watchdog."
Posted by W.C. Varones at 8:36 AM 3 comments:

Just two years after his 30-year-debt-for-iPads swindle, Encinitas Union School District Superindendent Tim Baird now admits that his plan to strip the community of an irreplaceable asset is all about plugging the hole in his budget. Patch:


“This loss of revenue will force us to raise class sizes even higher, and ultimately lay off some of our best and brightest teachers," Baird said.

“It is not too late to stop this train wreck."

So how will EUSD pay its teachers a few years down the road when the money from Pacific View has been blown through? One of the most basic principles of running any organization is that you don't use non-recurring revenues for recurring expenses.

Baird, by the way, is reportedly demanding a pay raise, and the school board, including Mark Muir's wife Maureen Muir [I stand corrected?], appears set to give it to him. 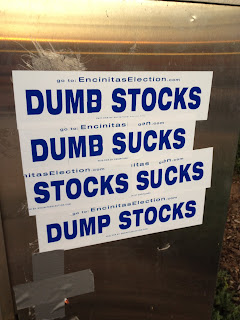 Olivier Canler is one of the organizers behind the Encinitas Right to Vote (on increasing neighborhood density zoning). Without the initiative, a 4/5 majority on the City Council can decide to put an apartment building right next to your single-family home.

Here is Canler on the Council candidates:


-Lisa Shaffer and Tony Kranz are the preferred candidates. They will listen to the residents, are concerned how the General Plan Update can change our communities, and are supporting the idea of having the community being engaged in a meaningful way in future land-use changes. They both want to maintain our beach-town character, and want to preserve open spaces and our precious natural resources. Beyond the General Plan they are very familiar with issues facing our city. They will bring fiscal responsibility to our council.

In contrast, Jerome Stocks and Kevin Forrester are pro-growth and are backed by special interests made of developers (most are out-of-town). They have very little regards for what residents want when it comes to growth. Mr. Stocks has been quoted saying things like, "This is just a planning exercise, none of these units have to be built", or "I'll try to respect community character". Mr. Forrester, a realtor and attorney, specialized in mitigating land-use disputes, is more blunt: He does not believe the public should be involved in zoning exercises adding that these exercises are best left to the "professional planners". He wants to expedite the planning process. Here is what Mr. Forrester said to the Union-Tribune: "The biggest challenge facing the city of Encinitas is re-establishing the policy-setting role of the City Council in land-use planning, and avoiding the takeover of planning by a vocal minority of Encinitas citizens". Characterizing the people behind the Right-To-Vote Initiative as a vocal minority is offensive and a gross distorsion of the facts. In reality, most Encinitans are deeply concerned about further developments in our town.

Mark Muir is all over the map when it comes to zoning changes. He takes credit for the reboot of the GPU (when the vote was unanimous and it did not take a genius to understand that this plan was vastly unpopular). He is not in favor of density bonus but does not support the Right-To-Vote Initiative. He is also aligned politically with Jerome Stocks and Kevin Forrester. We can't trust Mark Muir.

The other candidates, Barb Yost, Brian Ziegler, Thomas Brophy, are all concerned about zoning changes. Their hearts are in the right places. All three support the Right-To-Vote initiative but are newcomers on the Encinitas public scene. I would encourage everybody to visit each of these 3 candidates website and decide for yourself.

Your mid-October Hoodlink is up

Link
Knowledge is power.
Posted by W.C. Varones at 7:36 AM 7 comments:

Jerome Stocks: I swear my $4000 check to the Lincoln Club had absolutely nothing to do with the hit piece they sent out against Teresa Barth four days later

Here's Mayor Jerome Stocks at the Cardiff candidate forum when asked to pledge not to send out last-minute, negative hit piece mailers.


"I've not only pledged that I won't; I will state affirmatively that I never have, and I won't change that now."

Then why did you pay the Lincoln Club $4,000 four days before they sent out this sleazy hit piece against Teresa Barth in a race that no one in the Lincoln Club claimed to know anything about?

Do Encinitas voters really want a city councilman who will lie to their faces like that? What else is he lying about?
Posted by W.C. Varones at 6:07 PM 8 comments:

Ha! I had thought many times of the Boss Hogg analogy for our local crony council, but hadn't used it yet. Curse you, Trevor Trevitis, for beating me to it!
Posted by W.C. Varones at 5:34 PM No comments:

We knew when the city commissioned its ridiculous "citizen satisfaction survey" in an election year, the purpose was to give the incumbents a political weapon. As if the reason anyone likes living in Encinitas has anything to do with City Hall. Conveniently left out of the survey, by the way, were questions about overdevelopment, unfunded pension liabilities, toxic waste at the Hall Park, crony real estate transactions and city contracts, etc.

I'd say the survey tells us what we already knew: that people love to live in Encinitas and have almost no interaction with City Hall.

So here is the mailer we've been expecting. "Thank you to our city council... for making our city such a wonderful place to live, work, and play. Keep up the good work." 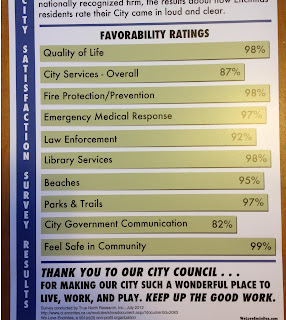 But the new twist is that the group paying for this is a 501(c)3 charitable organization, "We Love Encinitas."


The organization must not be organized or operated for the benefit of private interests [...]

Think about that: Jerome Stocks' backers are getting tax deductions for sending out what are, for all practical purposes, campaign mailers.  I suspect the IRS will frown on this charade and those involved will face legal consequences.  But even if not, what was Stocks thinking?  On the heels of sign-gate, to serve up another prime example of cutting corners and bending or breaking rules for political gain?  How much more blatant could he be in validating the complaints of his harshest critics?
Posted by W.C. Varones at 6:10 PM 32 comments: 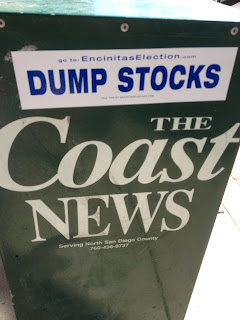 A bumper sticker in every copy!

The sticker is from the Encinitas Election site, which is a roundup of anti-Stocks/Muir material.


Strong words were issued Wednesday night as the mayor of Encinitas and a city council member were blasted for a violation of city code.

The incident is becoming known as "Signgate." Encinitas Councilman Mark Muir and Encinitas Mayor Jerome Stocks were caught on video breaking their own city code by putting up their campaign signs on the corner of Encinitas Boulevard and El Camino Real before they were allowed.

Video shot by Joe Corder on Oct. 5 – two days before campaign signs were allowed to go up – shows Stocks and Muir in violation of their own city code.


Click on over and watch the video -- especially Mr. Stocks' reaction at the end.

Let me be the first to say that I agree with Mr. Stocks: campaign violations are not capital offenses, and I do not favor his execution. May Mr. Stocks live to a ripe old age free of the pestering of Encinitas busybodies, and they free of him.

And then there were five...

Patch reports that Lisa Shaffer leads in fundraising, and four other candidates are also raising money:


Lisa Shaffer took in the largest amount of contributions at $35,125 to date. Non-monetary contributions total $1,507 to date. Her total expenditures are listed at $25,809.

Current Mayor Jerome Stocks, who has served twelve years on the council, with three years as mayor, reported monetary contributions totaling $5,715, with an additional loan from Stocks to the campaign for $2,500. His expenditures were reported at $4,364.

Kevin Forrester took in $4,961 in monetary contributions and a $4,300 loan that the candidate made in three increments to the campaign. His expenditures came in at $5,313.64.

All of those five have a very legitimate shot at one of the three seats. The other four? Not so much. This election really counts, and will be really close, so if you care about the direction of the city, you might want to talk to your neighbors about it.

If it weren't close, they wouldn't have to cheat

Republicans have a saying, "if it's not close, they can't cheat," reflecting their belief that Democrats will turn out dead voters, out-of-state college students, and missing boxes of ballots to steal close elections.

A corollary is that if they're cheating, it must be close.  Which is why it was interesting to see that Jerome Stocks and Mark Muir felt the need to break the city's election law and put up their signs early... and promptly got caught on video.

Jerome Stocks, who was such a stickler for the rules when it came to tearing down the Surfing Madonna, apparently no longer thinks rules are important.

A further note: while Kevin Forrester, as predicted, joins Muir and Stocks as the endorsed candidates of the RINO establishment, at least he had the good sense not to go riding around in the middle of the night with Laurel and Hardy.
Posted by W.C. Varones at 5:43 PM 3 comments:

The DUMP STOCKS campaign has received new supplies of DUMP STOCKS bumper stickers and yard signs. They're available by using the contact form at www.DUMPSTOCKS.org; or emailing info @ DUMPSTOCKS.org.

An equal opportunity offender, Encinitas Undercover will share contact information for other groups distributing material for or against any council candidates.
Posted by W.C. Varones at 2:52 PM 13 comments: 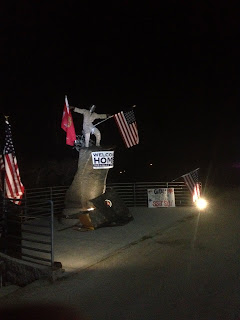 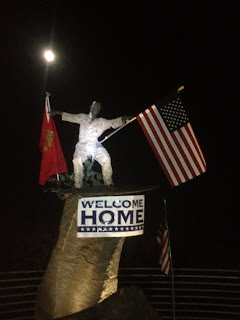 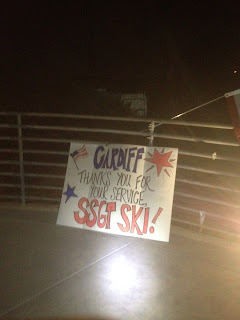 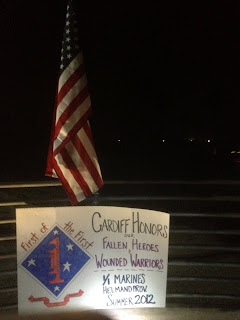 More American troops were killed last weekend by their Afghan "allies," bringing the body count to over 2,000 in the failed occupation.

What's the point of lingering for two more years and suffering hundreds or thousands more casualties when we've already told the Taliban we're surrendering in 2014?

How do you ask a man to be the last man to die for a mistake?

It's time to go home.