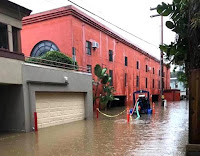 Big storms bring big problems to Leucadia. Highway 101 and the businesses alongside it are in a natural drainage swale and they suffer the majority of flooding. The highway sits in lower than the rest of the corridor, with the high bluff tops to the west, and higher ground to the east, across the train tracks.

In 2001, the City paid $4 million to lay 2 miles of storm drain between Highway 101 and the train tracks. Although this alleviated some of the flooding it did little to fix the problem.

Posted by Encinitas Undercover at 5:53 AM 45 comments:


Here is the report that Tony Kranz linked to when he said they were removed b/c of a fungus, but fungus is not mentioned here for any of these trees.

Posted by Encinitas Undercover at 6:58 AM 9 comments:

The mayor's newsletter on the Saxony homeless parking lot:


The Safe Parking program here will be closely regulated, will include 24-hour security, and will be monitored to prevent negative consequences for the adjacent neighborhood. Based on my tour of one of the other Safe Parking lots run by JFS in San Diego, and the profiles of the people who park there overnight, I'm confident that very few people will even know that they are there.


[...] we've received a large number of emails from those concerned and upset about the project.

There are still a lot of serious issues to work out. The city's priority is to make sure that the project provides a high degree of quality in the design, materials, function and aesthetic.

SANDAG's next round of upzoning:


Encinitas was assigned 1,554 housing units, after the previous housing cycle assigned us 2,353. The methodology of distribution was entirely based on the number of jobs and the amount of transit, without any carve-outs or exceptions. Solana Beach was assigned 875 housing units, up from 340 in the previous cycle, and was particularly unhappy, along with several other cities.

As the mayor of a city that spent years in a losing legal and regulatory battle with the state over our housing plan, I’m relieved that the SANDAG board didn’t go down the path of proposing a methodology that the state was sure to reject.

Posted by Encinitas Undercover at 6:36 AM 71 comments:


First came the plastic bag and polystyrene container bans. Now Encinitas may be exploring whether to limit natural gas use.

City Environmental Commissioner James Wang, who was instrumental in the city’s polystyrene and plastic bag ban campaigns, is asking his fellow commissioners to seek City Council approval for an ordinance prohibiting the installation of natural gas infrastructure in new buildings.

Please use the comments to record your observations.
Posted by Encinitas Undercover at 5:18 PM 44 comments:


Encinitas leaders will consider developing a parking lot for the homeless next week, but the idea is already receiving pushback.

If approved, the parking lot would be the first for homeless use in North County and modeled after other similar lots in San Diego.


Gilmer and his local partners plan to renovate the dilapidated building into a boutique hotel destination with a rooftop pool, bar and restaurant area.

The potential noise from that rooftop area is now a main argument in a lawsuit filed by Encinitas community nonprofit Coastal Defender NC, led by Dr. Richard McPherson, against the City of Encinitas.

Attorney Felix M. Tinkov represents the group who says their “acoustic expert’s noise analysis” determined nearby residents would be inundated with late-night noise, a violation of municipal code standards.

Posted by Encinitas Undercover at 11:38 AM 46 comments:

Please use the comments to record your observations.
Posted by Encinitas Undercover at 5:07 PM 22 comments:


Measure U, the City's most recent attempt at updating Encinitas' Housing Element, was rejected by voters in 2018.  The City was sued by the BIA and an affordable housing advocate to force the Housing Element Update's adoption; the judge agreed with them and suspended Prop A for one cycle.

Mayor Blakespear then took the additional step of suing residents and asking the court to invalidate Prop A in perpetuity for all Housing Element Updates.

The "Encinitas Boulevard Apartments" density bonus submission comes just months after the Housing Element Update was approved and is in direct contrast to Mayor Blakespear's comments that approval "Does not necessarily mean they [upzoned parcels] will be built on right away."  The Mayor also remarked "I don't think we'll have a bonanza of building."


The estimated 14.8% affordable units may or may not be built, as "unlimited waivers" would apply and allow the developer a variety of ways out.

In addition, the City is reminded by the developer's attorney that requiring traffic and GHG (Greenhouse Gas) studies is contrary to a "by right" entitlement process: Allen Matkins - "Submittal Requirements."
Posted by Lou at 1:42 PM 59 comments:

An Olivenhain homesteader’s ranch that dates from 1886 definitely ought to be a state and federal historic site, the state Historical Resources Commission decided Thursday.

Commissioners said the number of aging wooden buildings on the 10-acre Bumann Ranch property off Fortuna Ranch Road were impressive, and the owners’ 45-page application for historic status was both informative and amusing.

Last month, the mayor's husband, Jeremy Blakespear, spoke at city council to support his wife's action to take away bike lanes on 101 in Cardiff, forcing cyclists to choose between a pedestrian zone and a single high-speed car lane.

No surprise then, SD Reader:

After being approached by a few Bicycle Coalition members, he threw his hat into the ring to serve on the organization’s board of directors, made up of cycling clubs around the county.

On October 23, of the six candidates up for appointment, only Blakespear was not approved for the board. “I felt attacked for advocating good protected bike lanes, said Blakespear.

“I immediately left the meeting and resigned the next day.”

It's wrong for a city to sue its citizens, using their money

Last December, Superior Court Judge Ronald Frazier overturned [sic; he suspended it, not overturned it] citizen-driven and voter-approved Proposition “A”, known as the “Encinitas Right to Vote Initiative”. Proposition “A” gives Encinitas residents the right to vote on housing projects that include significant density increases and/or building heights greater than two stories. The court demanded that Prop. “A” requirements be overlooked for this housing cycle and ordered the City to adopt a legally compliant housing plan immediately. The ruling came as a direct result of the voters’ consistently rejecting the City Council’s site selections to upzone (i.e., increase density) in order to meet state growth requirements.

It is important to note that the ruling did not order the City to specifically implement either Measure “U” or “T”, the voter-rejected housing plans put forth in 2016 and 2018.

Instead of honoring Encinitas citizens by appealing the judge’s decision (a viable option), the Mayor and City Council rushed to approve the most recent voter-rejected housing plan, Measure “U”. To make matters worse, the Council also filed a lawsuit against their own citizens in order to seek judgment (Declaratory Relief) on whether they follow Prop. “A” voter requirements in the future.

It’s wrong for a City to sue its citizens and it’s even worse to do it with their own money! As a vocal supporter of both housing measures, I’ve always believed residents should have the final say on critical housing plans that are to serve as a blueprint for all future development. If the court decision is unfavorable to our citizens, nothing prevents the City from holding an advisory vote to honor the intent of Prop “A” and the will of the people.

Posted by Encinitas Undercover at 7:44 AM 74 comments: