A federal discrimination lawsuit alleging unlawful housing practices in Encinitas has expanded to include more defendants and allegations related to the controversial sales of at least two designated affordable single-family homes to wealthy investors, according to court documents filed last week.

The amended complaint, filed on Nov. 22 in the U.S. District Court for the Southern District of California, alleges the city approved the sales of two affordable homes — 1317 Portola Road and 1412 Mackinnon Avenue — to pre-determined, non-qualified investors instead of qualified, very-low-income applicants in violation of federal and state anti-discrimination fair housing laws.

“The City of Encinitas has not only had full knowledge that these developers have been selling the designated affordable homes to private wealthy investors, blatantly discriminating against selling to these protected classes, but the City themselves worked with the developers to create the vehicle for these developers to do so the way they crafted their affordable housing regulatory agreements,” the complaint reads.

The San Diego Coaster train is at a major crossroads due to the requirement that the train be moved off a 2 mile stretch of track on the Del Mar bluffs that are unstable due to accelerating cliff erosion. The proposed rerouting of the train via a tunnel under Del Mar is a massive multibillion dollar risk that is unwarranted given the train's small ridership and the disruptive transportation technologies that are set to make the train even more obsolete in the near future.

Alternatively, a repurposing of the underutilized rail line into a greenbelt/walk/bike trail is a major sustainability opportunity that has numerous co-benefits that include clean & local commuting, healthier living, greater flexibility in dealing with future sea level rise, substantially lower costs and potential development opportunities to address critical issues like affordable housing and community reinvestment. 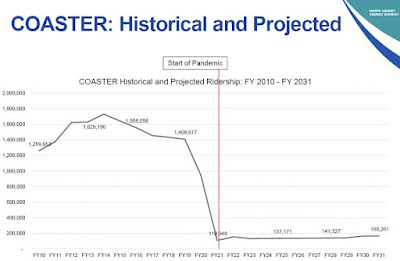 Posted by Encinitas Undercover at 10:27 AM 13 comments:

Homes that were in the $1 million range just a few years ago are now selling well into the $3 millions.

Posted by Encinitas Undercover at 8:58 AM 36 comments:

Norton says according to witnesses, the man at the center of the scene at the bar — someone Brittany did not know — ran up and punched her in the face, knocking her to the ground.

“At that point, her boyfriend and their friend heard something going on, so they turned around. He was kicking her in the face,” said Norton.

Norton says the man took off, and Brittany's boyfriend ran after him, detaining him until deputies arrived.

“She had to have surgery on her nose and on her orbital bone. They had to put an implant in to stabilize her eye socket,” said Norton.

Announcement unintelligible as usual. Something about black hat, black and blue flannel.

The City and/or Coastal Commission will not allow property owners to erect walls or bluff skirts to slow erosion.  And they take no action to keep beach goers from sitting directly under these fragile bluff faces.  This apparently occurred during a high tide, so there was a scarcity of people on the beach.  Had it happened at a different time, there could have been casualties.  There should be a 10 to 15 foot safety zone away from the bluff edge, where lounging is not allowed.  Looking at this collapse, even that probably would have been inadequate.  The City needs to develop a safety plan now. 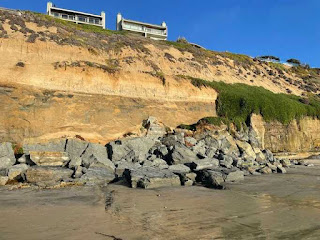 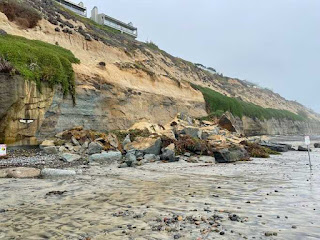 Posted by Encinitas Undercover at 7:57 AM 20 comments:

At first glance, a boarded-up hotel covered in graffiti along Coast Highway 101 in Encinitas has deteriorated into blight, illicit drug activity and a homeless crash pad since its closure several years ago.

But behind the scenes, an Encinitas developer has purchased Portofino Beach Inn and neighboring Captain Keno’s Restaurant to transform the properties into residential units, office spaces, a restaurant and bar, the latter of which will be named after the longtime Leucadia eatery.

Please use the comments to record your observations.
Posted by Encinitas Undercover at 5:29 PM 45 comments:

Is lack of enforcement making Encinitas a homeless magnet?