A teenager was attacked by a shark and air-lifted to the hospital early Saturday morning, according to Encinitas lifeguards.

The attack happened at Beacon’s Beach in Encinitas, around 6:55 a.m.

The boy was lobster diving not far from shore. It was an 11-foot shark, species unknown. Encinitas beaches are closed until Monday morning.

UPDATE: Victim is Keane Hayes, now upgraded out of critical condition.
Posted by Encinitas Undercover at 6:24 AM 17 comments:


Tyler Carender, 22, was given 10 years in prison for damaging and destroying buildings at St. Andrew's Episcopal Church and Oak Crest Middle School on three different occasions in fall 2016.

Posted by Encinitas Undercover at 7:43 AM 4 comments:

Please use the comments to record your observations.
Posted by Encinitas Undercover at 4:56 PM 22 comments:


The North Coastal Station is looking for a woman believed to have vandalized a car in Encinitas.

The woman was walking when she thought a car drove too close to her, said a station spokesperson, Detective Adrian Moses.

Upset, she used an object to vandalize the driver’s car. 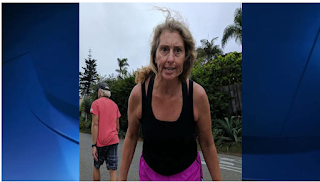 Posted by Encinitas Undercover at 8:13 AM 42 comments:

Does Measure U contain a Trojan horse to kill the right to vote?


Measure U proponent Kurt Groseclose, a former city planning commissioner, called the ballot measure a "locally controlled action plan" and said it was created during a "very transparent" process with more than 25 public meetings.

Opponent Peter Stern called it a "terrible deal for Encinitas residents and a wonderful giveaway for developers," and said it was worse than the city's previous proposal -- the Measure T plan, which voters turned down in 2016.

The new plan, which goes before voters Nov. 6, proposes up-zoning 15 properties in an effort to encourage the construction of low-income housing. Under the proposed zoning, each of the 15 privately owned properties would be permitted to have to 25 to 30 housing units an acre and buildings could be three stories.

Meanwhile, from the Encinitas Undercover comments:


At the Measure U debate forum on Tuesday, the Yes on U advocate, Kurt Groseclose, former Planning Commission member, got caught with his pants down. He claimed Measure U does not nullify Prop. A. The No on U advocate, Peter Stern, a lawyer, put the following PowerPoint slide on the screen.

PROGRAM 3C: Right to Vote Amendment
In 2013, a citizen initiative resulted in the Right to Vote Amendment (Proposition A), which requires voter approval of most land use changes and building heights higher than two stories. Proposition A cannot be modified except by another vote of the people. If a proposed Housing Element does not achieve community support, Proposition A may act as a constraint on the City's ability to comply with state Housing Element law. Assuming that this Housing Element is approved in November 2018, the City will take actions to ensure that future Housing Elements can be adopted in a timely fashion and that requirements for a vote of the people do not constrain the City's compliance with State law.

You can find this on Page 39 in the full text of the measure on the city website. The second time Stern put the slide up Groseclose turned around and read it. Mayor Blakespear took a photo of it with her smart phone. Both were stunned. Obviously neither had read the full measure. On leaving Blakespear looked like the bottom had fallen out of her world.

The full text is here. The language in question is on page 39-40 of the PDF and reproduced below (click to enlarge). 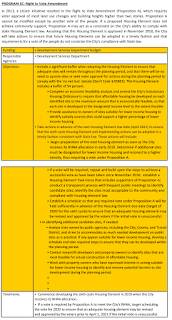 Do you like the status quo or are you ready for something... else?


Blakespear deftly offered detailed answers to the dozen or so questions, while Elliott, a self-described “metaphysical broker,” frequently pivoted back to his desire to build affordable housing for the city’s municipal workforce.

While not offering much detail about the plan, he alluded to building hundreds of units on the grounds of the old Pacific View Elementary School “as opposed to turning it into a garden,” alluding to the current plans to turn the property into the so-called Pacific View Academy of Arts, Culture and Ecology.

According to Superior Court records obtained by The Coast News, the District Attorney’s office has charged Nichole Burgan with misdemeanor filing of a false police report stemming from the claims made during the lead up to the June 5 primary election.

Graham was the top Republican in the race, but didn't make the November ballot because the top two vote getters were Democrats.

As inconvenient as the election season false accusation was, it probably didn't make a difference, as the huge field of hopeless Republicans split the GOP vote. 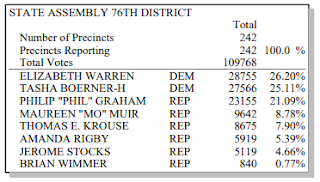 
A glass barrier in the rear of the home was visibly shot out from Lone Jack Road, according to a picture taken by an NBC7 reporter.

The online website US Gamer is reporting the shooting occurred at the family home of a popular Twitch streamer, DrDisrespect.

"Beahm also revealed that this is the second time in two days that someone shot at his family's residence, but today the shots hit his home's upstairs window. The clip ends with Beahm becoming visibly upset," the website states.

For years we have wondered whether Encinitas was the Ponzi scheme capital of the world. First there was Scott Bottolfson. Then there was John Clement's EdgeFund. And then Steven Hamilton and Dennis Eugene Long.

The latest case is an accountant and family man who has lived in Encinitas and been active in the community for several years after swindling people out of millions in Colorado.


A Ponzi scheme that swindled unsuspecting investors out of millions of dollars has landed a former Gunnison accountant behind bars.

District Court Judge J. Steven Patrick sentenced Laverne “Vern” Moter, 50, to 24 years in prison this past Thursday — the maximum presumptive sentence for the two counts to which Moter pleaded guilty this past May.

Over the span of four years beginning in 2009, Moter solicited more than $2.6 million from investors, promising hefty rates of return. However, a Colorado Attorney General’s office investigation found that Moter paid initial investors returns on their money with finances garnered from new investors — all while living a lavish lifestyle himself on the life savings of those victims.

Even at the time of Friday’s hearing, Slothouber noted that Moter rented a home in Encinitas, Calif., valued at about $1.5 million with a view of the ocean and paid $29,000 per year in private school tuition for three kids.

The defense asked for a few months in jail and probation, but the judge issued the maximum sentence.
Posted by Encinitas Undercover at 6:19 AM 9 comments:

“The Poway mayor and I have a positive collaborative working relationship on SANDAG and I look forward to being considered by the whole board to serve with him,” she said.

Posted by Encinitas Undercover at 6:50 AM 26 comments:

Hello Neighbors I am John Paul Elliott Lets Save Beacons!

I am local Neighbor that is running for Mayor. I want to preserve Beacons and Leucadia from the Street Scape Crazed mentality that is trying to make us like Orange County.
I will stop the back-room deals and have a plan for sustainable long term housing for our children and all the City employees. 1st of all everything will be video recorded espesially the "Back-Door-Deals" these guys will have to show Us who they really are. We will get rid of the Orange County City Manager and replace her with a less expensive replacement who is from Leucadia NOT Orange County. We can take it Back with this election please tell your friends about me and Coco(My little Dog who s running with me as Co-Mayor). My web site will up soon JohnPaulElliott.org and please call me so I can get you our yard signs and get the word out that we can change the pathway we are on before it's to late.
#1. We will "stop Street Scape in it's tracks" #2. We will install Ped-Crossing in Leucadia lat RXR Tracks like they did at Swami's. #3. We'll place Lighted Stop Signs and cross walks on 101, not go into 27 Million debt. #4. I will develop Affordable Housing for our Residents forever sustainable & Affordable. #5. I will Preserve Beacon Beach for all the future families to come. Get involved come to these City Meetings(Which was stirred up by Us the public in the July Public Planning Commission meeting in town hall ,where we all told the current government what the heck is wrong with you? Get involved Vote for me as the Local Mayor choice and we can save our Scared Community. You are welcome to call me and make any suggestions toward a better Leucadai. Thanks for reading my post.  John Paul (JP) Elliott & "Coco" (951) 781-6900