After another late-night iPad burglary at another local school, the thieves got caught at the I-15 checkpoint on their way home to Hemet and Moreno Valley.

Fox 5 has the story.


Thomas Earl Burleson, 20, Trevor J. Williams, 21, and Eyon Zimmerman, 19, pulled into the inspection station on northbound Interstate 5 just south of Temecula in a Lexus shortly after 2:30 a.m., according to police.

Mr. Zimmerman describes himself as a "full time hussler" and "thug" on his Facebook page, and promises lucky ladies, "if u my bitch u get the chain n the ring to match." Seemingly having found some economic success in his career, Mr. Zimmerman recently posted, "this my year i be dreamin of pots of gold at night realshit."
Posted by W.C. Varones at 5:09 PM 14 comments:

We had to remove a few comments.  We are free-speech absolutists, but some of the comments were personal attacks that bordered on libel.  The Internet is a permanent kinda thing, and it can be damaging to someone's reputation and career to have personal attacks out there.


Please keep the comments to issues, not personal attacks, especially if you are using someone's real name and especially if the target is a private citizen, not a public official.

If you are the target of a comment you believe should be removed, please e-mail encinitasundercover at gmail.
Posted by W.C. Varones at 6:44 AM 18 comments:

Word on the street

The word on the street is that city staff knew, or at a minimum should have known, that they needed Coastal Commission approval for the "road diet" (removing a northbound 101 traffic lane to create a bike lane), but tried to sneak it through by attaching it to the southbound "sharrows" proposal. Video of the July 18, 2012 council meeting where the council unanimously followed the staff's recommendation is here. Streetscape opponents then did Public Records Act requests to find out if the city had obtained the necessary approvals, and got the attention of the Coastal Commission when they got the runaround on those information requests.

Cutting corners and keeping the public in the dark because the ends justify the means? Really bad.
Posted by W.C. Varones at 6:33 PM 14 comments:

It looks like it. Coastal Commission letter to city:


As stated above, it is Commission staff's position that the proposed lane elimination on highway 101 requires both an LCP amendment and a Coastal Development Permit. Commission staff recommends that the City first process an LCP amendment for the comprehensive project, which may include roimd-a-bouts, reverse angle and parallel parking, and reduction of portions of northbound Highway 101 from two lanes to one lane, and then process a coastal development permit, which wil be appealable to the Coastal Commission, both due to partial location in the appeals area and as a major public works project.

At least we'll be generating lots of busywork for state and city government workers. Bureaucracy is stimulus!
Posted by W.C. Varones at 12:35 PM 13 comments:

The council is right now considering the Desert Rose developer appeal. The Planning Commission rejected the development, but the developer is coming back claiming the rejection was illegal.

The development is clearly unwelcome and completely out of character with the surrounding neighborhood. The neighborhood is zoned Rural Residential - 2, meaning a maximum of 2 lots per acre, or a minimum of 1/2 acre per lot. Most properties in the neighborhood, however, are an acre or more. The developer is using the density bonus law to try to force 17 lots (one street lot, 16 dwelling lots) into a 7+ acre area that would normally be zoned for 15 lots. Even at 15 lots, this would be much denser than the surrounding neighborhood, and a burden on traffic and street parking in the narrow, rural street.

The question is whether the state density bonus law, written by developers for developers, mandates the city approve this development regardless of the impact on the community. There seem (to this lay reader) to be enough outs in the law to allow the city council to reject the appeal on a number of community impact grounds if they so choose.

UPDATE: No decision on Desert Rose. Can kicked until March.


One correction that I would request is that this property is zoned for either 7 units (identified in the GPU Update on pg. B-97, line 1. Project planner Roy Sapau also figured it in an email to Maggie Houlihan in January 2011. That that time, he figured that the actual zoning for this property was 8 houses without the application of any up zoning.

The misinformation that they are only asking for 4 more units than they are entitled came from the appeal that Marco Gonzalez placed. As you see, 16 units with 1 low income house and 1 fee paid to the City for the 17th is much more than 7 or 8 houses. In fact, there is currently a low income family who have tended the horses for over 20 years who are living there who will lose their home, so it is hard to understand what benefit to the community this project will provide.

Not sure why this differs from the RR-2 max zoning, but we'll take your word for it.
Posted by W.C. Varones at 7:04 PM 41 comments:

A very impressive effort by a dedicated group of Encinitans. The initiative would require a public vote before neighborhood zoning could be changed (e.g. to put an apartment building in a single-family neighborhood).

Encinitas has a rich history of fraudsters: Scott Bottolfson, John Clement, Steven Hamilton, Michael T. Pines, (not to mention our former Congressman Randy "Duke" Cunningham, who represented us but lived in RSF with his ill-gotten gains) ...

We can now add to that list fugitive felon Wanda Lee Ann Podgurski.  Podgurski skipped court and missed her conviction on 29 counts including insurance fraud, tax evasion, perjury, and grand theft.  She had bought disability and long-term care policies from a number of insurance companies, then collected by faking disability while she went on a number of fabulous vacations.

Podgurski is presumed on the run.  Facing an effective life sentence at her age, we're thinking Zihuatanejo.

We've criticized EUSD Superintendent Tim Baird for his debt-for-iPads scam, where he used 30-year debt to fund iPads that would be obsolete or broken in five years.  He's clearly no finance major.

But even we did not imagine Baird would be so oblivious as to fail to secure the iPads after three other area schools were burglarized for iPads and laptops in the past weeks.  Alas, he was.

Initial reports stated that items were not stolen. However, authorities discovered the iPads missing after a thorough investigation, according to the District's Gerry Devitt.

Burglars broke through a fence and window, according to Sgt. Roberto Lopez.

Only 28 more years of property taxes left to pay off that iPad debt. 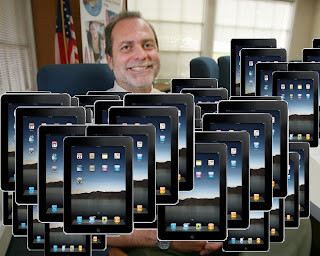 This weekend's Olivenhain Road DUI crash driver has been identified as Zoraida Balderas.

In a 2010 North County Times story still available at archive.org, Zoraida Balderas discussed the accidental murder of her brother by his friends and fellow gang members in a botched attack on Carlsbad rivals.


Zoraida Balderas, 20, said her brother grew up in Cardiff and knew the young men she believes are his killers for many years. Her brother wasn't a violent person, she said, and she thinks he was used by the other men.

"Those guys didn't care who they shot; my brother would have never been so cold," Balderas said.

Juan Carlos Balderas was convicted of grand theft in 2006, but at the time of his death, he was working toward his GED and looking for work, his sister said.

[Victor] Lopez testified that Balderas drove them to Pine Park in Carlsbad's barrio neighborhood, parking by the Carlsbad Community Center. Javier Lopez agreed to be the shooter, he said.

They quickly spotted some men who looked like Carlsbad gang members.

Lopez said he and Balderas got separated from their friends and were confronted by about four Carlsbad men.

After an argument, the Encinitas gang members went into an alley to hide. There, they encountered a Carlsbad man who appeared to be a gang member with some kind of weapon, Lopez said.

Lopez ran for his life after the man struck him in the face with a weapon, possibly a bat or a gun, he said. He never saw Balderas again, he said.

Balderas was found dead in a vacant lot by the park. Police said he was killed by the same 28-gauge shotgun Barraza had loaned them, and that Javier Lopez, probably in a chaotic fray with other gang members, shot him.

No State for Young Families


Declining migration and falling birthrates have led to a drop in the number of children in California just as baby boomers reach retirement, creating an economic and demographic challenge for the nation's most populous state.

"After decades of burgeoning population and economic growth…the state now faces a very different prospect," said a report released Tuesday by the University of Southern California and the Lucile Packard Foundation. The report, "California's Diminishing Resource: Children," analyzed data from the 2010 census and the American Community Survey to conclude that the trend marks a "historic transition" for the state. 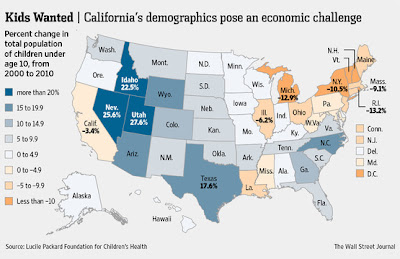 All of this raises the question: where is all this alleged population growth that SANDAG is using to force high-density development on Encinitas?
Posted by W.C. Varones at 3:04 PM 5 comments:

The 101 bike lane approved by the council last summer appears at risk of being taken back.


Last summer, the Encinitas City Council approved the sharrows and bike lane. Originally, they were slated to be complete in a week or so. But City Manager Gus Vina asked to hold off on implementation until after a Jan. 30 Council meeting that will review the sharrows and bike lane. According to Vina, there’s a small chance Council could tweak plans for the projects at that meeting. Should that happen, he doesn't want construction crews to redo work that’s already been done.

The plan would reduce northbound car traffic to one lane north of Leucadia Boulevard in order to make space for a bike lane.

Just five miles out Rancho Santa Fe Road, in a nondescript industrial park, lies Stumblefoot Brewing, a startup with both a fun tasting room and, more importantly, great beer. All the brewing is done on site in a single industrial warehouse unit which serves as the tasting room as well. That will likely change soon as capacity will need to grow to meet well-earned demand. In a region known for good brewing, these guys are up to the competition. They've got solid traditional ales, IPAs, and stouts, but they're also good when getting creative with brews like a black IPA and a chipotle stout. 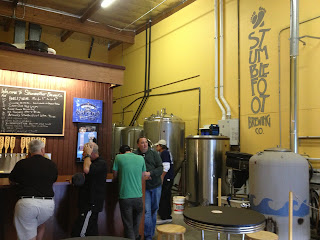 Check out Stumblefoot at the tasting room Thursday through Sunday. You can also get some of their beers on tap at Encinitas locations like Lumberyard and Blue Ribbon Pizza.

Many Encinitans felt Scrooged when Paul and Kristin Gaspar and developer David Meyer set up a sham charity, "We Love Encinitas," to send out political mailers supporting the re-election of Jerome Stocks and Mark Muir.


Nonprofit donates to other charities

We Love Encinitas, a nonprofit committed to the education and distribution of positive information about Encinitas, has made contributions to four local charities:

• The Hand to Hand fund through the Coastal Community Foundation, which promotes economic independence and positive change in the lives of women and girls.

• Conner’s Cause for Children, which provides critical financial assistance to families struggling to cover the out-of-pocket costs of caring for a child with a life-threatening illness or injury.

It was not clear from the news article or from We Love Encinitas' web site how significant the group's contributions were, or whether they amounted to more money than the group spent on the political campaign.

It is also not clear whether this is just another legal and PR ploy to create the appearance of a legitimate charity after being caught red-handed, or whether the Gaspars have seen a ghost and changed their hearts.

But in the holiday spirit, let us hope this is a true Christmas miracle. 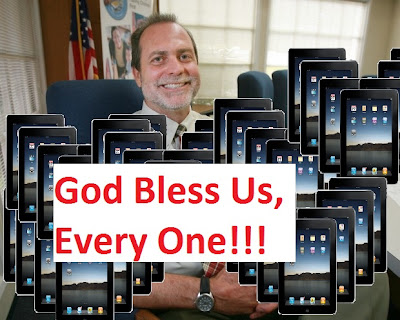