La Paloma Theatre is an irreplaceable treasure: a link to Encinitas' past and a downtown venue for independent movies and the occasional concert or other special event.

But the economics of the place must be brutal. It can't remain open forever if locals don't give it more support.

This week, fortunately, you have the opportunity to support your local theater while enjoying a very good but little-seen Hollywood film. Mud gets an almost unheard of 98% on Rotten Tomatoes, and the critics are right. It wasn't formulaic enough to get much play in major cineplexes, but we are lucky to have it here. And don't be surprised if it gets wider release after the Oscars.


“Leucadia is getting very trendy,” said Criss Crozier, managing partner of Swell Property. “That whole funkiness is changing.” Many of the people who have lived here for more than 40 years are selling the older homes, which buyers are then renovating or razing to build new larger homes on the property. Crozier describes the current real estate market as “more than red hot — it’s white hot.”

Leucadia falls within the Encinitas 92024 ZIP code where the median price in 2012 for a single-family home was $755,000 – a 7.2 percent increase over the previous year. The median price for condos was $333,750. Prices in Leucadia fall into the higher end. At the low end of home sales, Crozier noted that a two-bedroom house recently sold for $799,000. “Everything else is likely to be over $1 million,” he said. At the high end, a five-bedroom oceanfront home along Neptune Avenue is currently listed for $5.5 million.

Is the Supreme Court's Koontz decision good or bad for Encinitas?

A commenter on Encinitas Undercover brought up the Supreme Court's recent Koontz decision, wherein the Court rejected a city's making a development permit contingent on the property owner forfeiting the majority of his property to the city.

The New York Times freaked out about this ruling, proclaiming it doom for "sustainable growth."  The libertarian Cato Institute mocked the NYT hysteria.  We suggest readers read both arguments and come to their own conclusions.

Casual readers of Encinitas Undercover may have read this site's coverage of Proposition A as anti-property rights.  This interpretation could not be further from the truth.  We fully support the property owner's right to develop his property to the fullest extent allowed within existing neighborhood zoning.  What we don't support is a developer bribing or otherwise persuading the city council to change the zoning for the developer's financial gain.  Proposition A should, subject to court challenge, put an end to that sort of corruption.

And now back to Koontz and its impact on Encinitas.  It would seem to this farm boy that Koontz prevents a lot of "Smart Growth" government extortion in exchange for upzoning, but Proposition A has already prohibited the same thing.... so Koontz can be seen as a rejection of the Smart Growth central planners, but Encinitas already rejected them.  Koontz is therefore largely irrelevant to Encinitas as long as Proposition A stands.

That's our opinion... what's yours?

And it ain't even close!

... as told by commenters and observers.  Please correct us if any of these are wrong.
- hired three new full-time firefighters and battalion chief paperwork guy.
- try to come back in July and get a 4/5 vote to close downtown bars at midnight.
- no action on red-light cameras.


Encinitas residents say their downtown is turning into a Pacific Beach-like atmosphere with partying and drinking spiraling out of control. On Wednesday night, they asked the Encinitas City Council to do something to fix it.

"It's dirty, it smells, people are foul-mouthed," one Encinitas resident told the council.
"Public urination, noise levels from people screaming and yelling in the parking areas. Drug use, activity, sales," said another.

Residents say public drunkenness has also become a major problem in the downtown area, leading to wild behavior that they want to see stopped.

"These people are now using my planter boxes as their bathrooms," said a resident. "It's not very nice when I go outside and say, 'Can you please not do that,' then they offer to fight me." 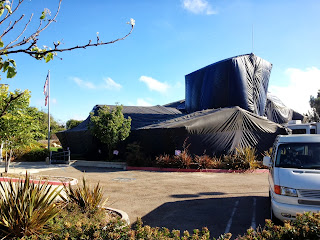 How does a brand new, multi-million-dollar, cinderblock fire station already have pest infestation?
Posted by W.C. Varones at 5:45 PM 64 comments:

Did conservatives actually vote for Proposition A in Encinitas?

Yoga: the gateway drug to Hinduism.

Read the whole thing. It's really kinda funny.
Posted by W.C. Varones at 9:55 AM 6 comments:

It’s widely known that many city of Encinitas employees are over the top. To determine which employee crowns the list, the City conducts a biennial competition that starts with soliciting nominations from residents.

To qualify as a nominee, the City employee must be grossly overpaid, far too powerful, callously underhanded and unresponsive to citizens’ input. Those qualifications narrow the choices but focus the public’s mind.

To avoid internal favoritism, the City asks that nominations be submitted to W.C. Varones at http://encinitasundercover.blogspot.com/. In due time, the City Council will choose the award winner.

We are honored to be mentioned by the witty and mysterious Guerrilla, though we suspect he may be poking a bit of fun at our rabble-rousing friends.

Citizens interested in nominating employees may wish to start by browsing the very large $100,000+ Club.
Posted by W.C. Varones at 8:28 AM 29 comments:

Don't stay at an Encinitas hotel if you value your privacy

Encinitas to turn over hotel guest records to police without a warrant.

Tony Kranz was the only council member who even expressed any concerns over privacy, and even he went along with yet another unanimous city council groupthink vote.

In other news, SANDAG is recording your license plate movements everywhere you go.

And we still haven't had a good public discussion of the Big Brother cam at Leucadia and 101.

Your children won't even find any of this unusual or troubling in any way.

P.S. May I recommend to both tourists and homeowners Air BnB?  It's a great way to save money, make money, and meet interesting people... all while sticking it to The Man.
Posted by W.C. Varones at 8:47 PM 35 comments: 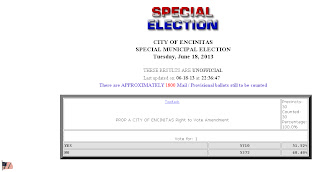 Congratulations to the Yes on A folks for what looks like a victory.

The remaining 1800 mail/provisional ballots would have to break about 60/40 to the No side to change the results (in addition to all being ruled valid). This is essentially statistically impossible unless there is some underlying difference in the population of provisional/late mail voters vs. the populations of both earlier absentee voters and voters overall (such as if a large number of the provisional voters are hired No on A campaigners from Lemon Grove, for example).

We'd say that, barring extraordinary irregularities, you can put a fork in this one.

Sign-gate Part Deux: No on A

Well, the developers behind No on A are trying to top them.  Encinitas municipal code prohibits using the public roads and sidewalks for campaign signs.  City code enforcement personnel have the job of removing illegally placed signs.

Which is why, just as Stocks and Muir did their Midnight Cowboy stunt on a weekend evening so code enforcement couldn't take down their signs, the No on A people waited until late in the day yesterday, the day before election day, to put dozens of signs all over Vulcan, Santa Fe, Encinitas Boulevard, and Leucadia Boulevard.

Encinitas Undercover contacted Council Member Tony Kranz late in the afternoon yesterday, and he was able to get some of the signs removed before code enforcement went home at 5 pm. 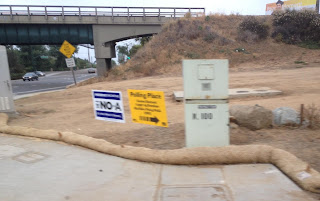 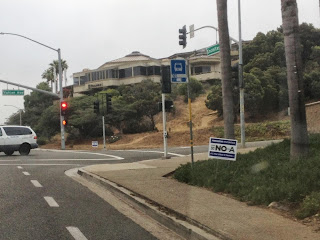 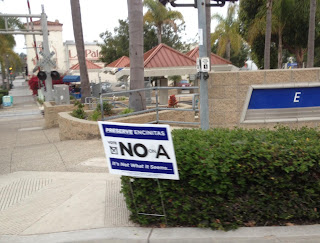 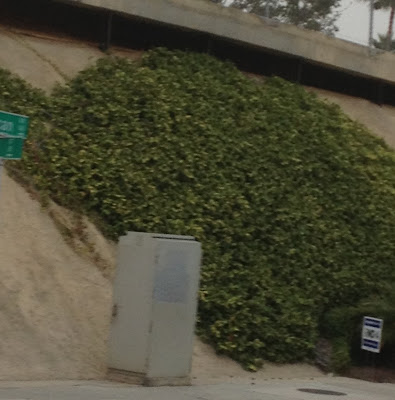 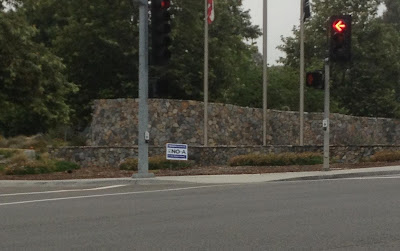 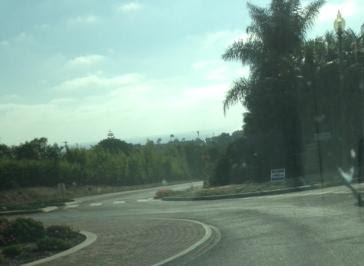 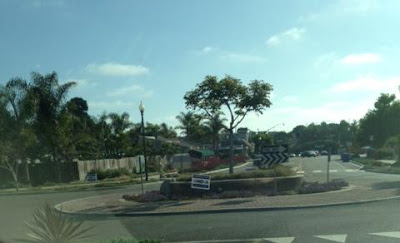 Code enforcement supposedly begins work at 7 am, but signs were still illegally placed all over Vulcan, including right in front of City Hall, around 8:30 am today. So the No on A cheaters succeeded with their plan to get illegal advertising in front of both evening and morning commuters right before the election.

If the developers and city council are on the right side with No on A, why do they have to lie and cheat to win?
Posted by W.C. Varones at 8:57 AM 53 comments:

Labels: no on a, prop a, proposition A