The Housing Element Update Task Force will hold its next public meeting July 6, when the group is expected to hear suggestions for the first time from its recently hired housing consultant.

Posted by Encinitas Undercover at 10:54 AM 76 comments:

Encinitas can make El Camino Real more pedestrian-friendly by widening the sidewalks, improving the crosswalks and adding more trees, according to recommendations from an expert the city hired to study the thoroughfare.

The council plans to set aside $250,000 in the coming fiscal year for improvements to El Camino and will use Burden's advice as it explores how to spend that money, Mayor Catherine Blakespear said.

Please use the comments to record your observations.
Posted by Encinitas Undercover at 5:00 PM 13 comments:

6PM at City Hall tonight.
Posted by Encinitas Undercover at 8:54 AM 75 comments:

Vulcan Avenue east of the railroad tracks has long been a preferred route for locals to get north and south between Encinitas Boulevard and Leucadia Boulevard while avoiding the Coast Highway traffic and stop signs. That's about to change.


The Paul Ecke Central Elementary School community will get the four-way stop sign on Vulcan Avenue they have coveted for years, but the council’s decision on the issue was not unanimous. The City Council voted 3-2 in favor of the all-way stop at Vulcan and Union Street. Deputy Mayor Tony Kranz and council members Tasha Boerner Horvath and Joe Mosca voted for the stop sign, which they said was long overdue and would keep kids safe.

This is kind of weird though:


Mayor Catherine Blakespear and Councilman Mark Muir voted against it after suggesting the item be returned to the Traffic Commission to consider alternatives short of an all-way stop sign, which they said would create unnecessary vehicle stops that would create added pollution next to the elementary school.

Has there ever been a study that shows that a stop sign in front of an elementary school creates a measurable increase in air pollution in classrooms or on the playground? Where are Blakespear and Muir getting their information?
Posted by Encinitas Undercover at 4:14 PM 62 comments:

Patrons of the lively downtown Union Kitchen + Tap will finally be allowed to eat and drink in the patio area, but its owners will need to provide the city with yearly documentation that alcohol isn't their primary source of income.

Is it possible that Union actually sells more food than alcohol?

If not, will the city actually hold Union accountable?
Posted by Encinitas Undercover at 2:16 PM 7 comments:

Please use the comments to record your observations.
Posted by Encinitas Undercover at 5:07 PM 10 comments:

Local realtor and anti-Prop A campaigner Doug Harwood has passed away.


Proceeds from the event benefit the McAlister Institute, one of San Diego’s leading resources to help people and families affected by addition.

Posted by Encinitas Undercover at 9:12 AM 4 comments:

I fought the law and I won

We've covered before Encinitas' red-light camera contract with the corrupt Australian company Redflex. The program takes millions of dollars out of the local economy and provides no net benefit to the city budget and highly dubious public safety benefit. Despite dozens of cities dumping Redflex, Encinitas continues the contract.

Now a reader writes of a personal victory over the Redflex cameras.  From the Inbox:

My red light “infraction” was surveilled and recorded at the Minority Report-looking set of cameras at the intersection of El Camino Real and Encinitas Blvd. To my chagrin, after adding up the cost of the ticket and the multitude of taxes, court fees and Orwellian-termed charges slapped on by greedy, fat-fingered bureaucrats on top of it -- plus 2 points on my driving record that would have driven up my car insurance cost for 2 years -- the red light camera ticket delivered me a potential net cost of….

Over one thousand dollars. Luckily, I contacted a small law firm in San Diego -- “Mr Ticket” -- and for a very reasonable sum the attorney took my case (along with many others I suppose), argued on my behalf, and won.

Due to complaints and a dubious Constitutional status, red light cameras have been removed in many areas across San Diego.

Although there may be a window - the city’s contract with Redflex Inc., the intermediary camera experts that control the red light cameras in the city, expires in 2018.

What’s that, you say? A company has access to the camera data (as in your personal information, likeness, additional people in your car, their likeness, etc) is handed off to a third party who then processes the info, pictures, etc.? Yes, that’s right.

Question: How many hands does it change in the meantime? Who has access to your likeness, driver’s license number, vehicle, name, address? Who, with criminal or malicious intent, could get their hands on your private information or use that as blackmail?

The safeguard to those kinds of questions is exactly why we have a Fourth Amendment to the Constitution.

But sadly, many of our fellow citizens believe, “if I’m not doing anything wrong, what’s the problem?”

On a related note, In case you’ve wondered why there are so many cameras at other intersections in Encinitas today, it’s per the city’s recent policy of installing cameras at intersections to “alleviate congestion” (wink, wink). These numerous cameras aren’t for public safety revenue generators like the one I encountered at El Camino Real/Encinitas Blvd; they are purely surveillance.

That makes me feel great.

This is an excellent, thorough report explaining the pension crisis facing California municipalities.  While the numbers in the report are specific to Marin, the issues are mostly identical for cities like Encinitas.


It’s Worse than You Thought – While a net pension liability of $1 billion may be disturbing, the true economic measure of the obligation is significantly greater than this estimate.

The Thing That Ate My Budget – The annual expense of funding pensions for current and future retirees has risen sharply over the past decade and this trend will continue; for many agencies, it is likely to accelerate over the next five years. This will lead to budgetary squeezes. While virtually every public agency in Marin has unfunded pension obligations, some appear to have adequate resources to meet them, while many do not. We will look at what agencies are currently doing to address the issues and what additional steps they should take.

The Exit Doors are Locked – Although there are no easy solutions, one way to reduce and eliminate unfunded pension liabilities in future years would be transitioning from the current system of defined benefit pension plans to defined contribution pension plans, similar to a 401(k). However, this approach is largely precluded by existing statutes and made impractical by the imposition of termination fees by the pension funds that manage public agency retirement assets. [This last part is a new twist; San Diego has successfully transitioned to a defined contribution plan, but San Diego does not use CalPERS. The grand jury says that CalPERS has veto power over allowing defined contribution plans for new employees of any agency that uses CalPERS, and the CalPERS board would be likely to use that veto. CalPERS is like the Roach Motel -- cities check in, but they don't check out! Governor Brown proposed legislation that would have changed this, but it was killed in the union-dominated legislature]. 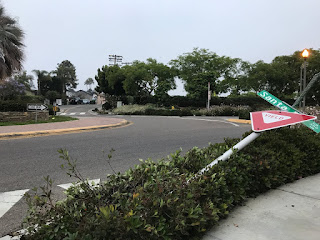 Posted by Encinitas Undercover at 6:16 AM 80 comments: