The San Diego County Grand Jury on Tuesday urged the city of Encinitas to create a comprehensive plan to improve storm drains in flood-prone Leucadia.

"Leucadia's existing storm water infrastructure is inadequate to handle the chronic rainwater flooding along Highway 101," the jury said in a press release announcing its latest report.

The jury recommended a project to relieve runoff that collects at Roadside Park, Leucadia's lowest point. That would require drilling a drainage outlet west through a bluff allowing water to empty onto the beach, the jury said.

The jury also suggested the formation of a special tax district to fund Leucadia drainage projects.

The city is broke and can't even afford a skate park at the long-overdue Hall Property. There is no way we are taking on a big infrastructure project like this.

No new taxes until the city addresses the real problems: pay and pensions, and bad real estate deals.
Posted by W.C. Varones at 6:04 AM 18 comments: 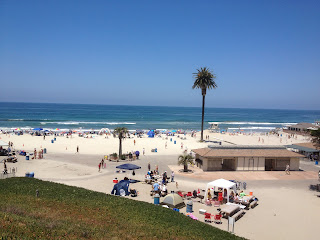 Perfect weather: air temp around 70, water high 60's, leave your wetsuit at home. It's almost a crime against nature to leave town for summer vacation when you live in Encinitas.

There will be a ceremony at 11:30 at the corner of Cottonwood Creek Park (Encinitas Blvd & Vulcan).

Residents of Olivenhain were out in force tonight at City Hall to speak out against a half-assed, part-time fire station being proposed there.

Olivenhain currently has absolutely horrible fire and ambulance response times, and it's only a matter of time until someone dies because of it.  City staff's recommendation to Olivenhain: don't have an emergency during off hours.

Olivenhain residents contribute far more than their fair share to the city in property taxes, and they get virtually nothing in return.  Olivenhain would be far better off seceding and going back to the county.

All this debate has been about a trade-off of priorities: Olivenhain lives vs. Cardiff and Leucadia beach and park improvements.  But nobody's really raising the biggest issue: that if we didn't have such horrible financial mismanagement at City Hall, there would be a lot more resources to go around for everything.  I'll just list a few of the issues:

It's hard to find a single thing the clowns at City Hall have done right with respect to fiscal stewardship.  If they hadn't screwed all this up so badly, we wouldn't be talking about trading off Olivenhain lives for Hall Park development.

UPDATE: OK, I spoke too soon.  Lisa Shaffer (a candidate for council in November) and Andrew Audet (sadly not yet a candidate) brought up my points quite eloquently.

UPDATE 2: Olivenhain to get a permanent fire station!  No word on where the money is going to come from.  Pension reform and bloated payroll reduction, anyone?
Posted by W.C. Varones at 8:26 PM 4 comments: 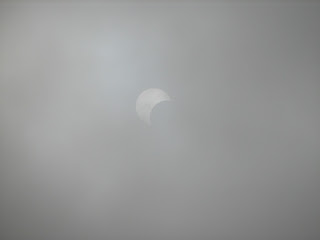 Afoot and Afield in Encinitas 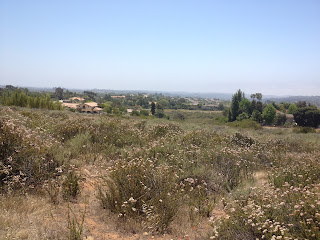 This is the view from the top of Encinitas, past the end of Lone Jack in Olivenhain. Some hiking and biking trails connect it to 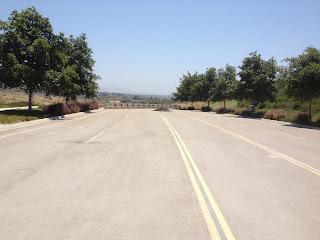 the south end of La Costa Oaks, where a four-lane Highway to Nowhere (complete with sidewalks Cardiffians can only dream about) hints at future development plans. 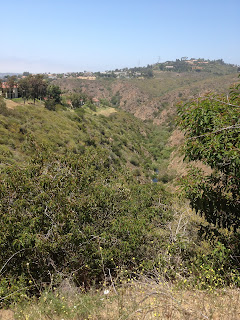 La Costa Canyon is not just a high school; it's a step and rugged canyon with a creek even in late spring.
Posted by W.C. Varones at 5:15 PM No comments:

We've written before about the Vulcan Puncture Path.

Now, a year and a half later, and after heroic private citizen action by Russell Levan, the City of Encinitas still hasn't done a damn thing to help.

These are photos taken today, just inches from the edge of Vulcan in Leucadia. 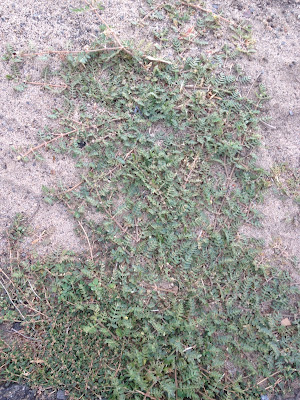 This is what the goat head vine looks like. Anyone walking along Vulcan will see numerous examples which wouldn't take that much time for city slackers to pluck. 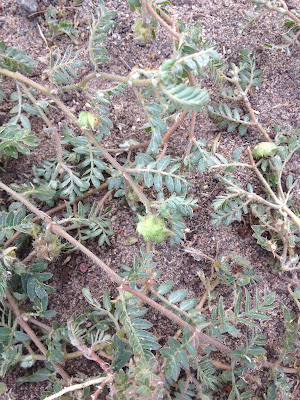 This is the nasty underside. These pea-sized seeds are covered in spikes that will shred bicycle tires.

Parks and Rec employees get salaries higher than they'd get in the private sector, and they all get set-for-life-at-55 pensions. If we can't get a single safe bike path on the most popular bike corridor in the city, what the hell are we getting in return?

Here are my thoughts on state and local candidates and issues. The new "open primary" is kinda screwy. It applies to everything except the Presidential race.

Republican nominee for President: Ron Paul. To vote for RP, you need to register Republican by May 21. You can get a form here or at the post office. I believe everyone should do so, as Ron Paul is a clear alternative to the corrupt, crony capitalist, bankster-owned, war-mongering, civil-liberties-killing mainstream Democrats and Republicans. Democrats, Libertarians, and independents get no choice (other than writing in Mickey Mouse), and the primaries for all other positions are open, so there's no reason not to register Republican. You can re-register Dem or no party immediately after the election.

Senator: Gail Lightfoot. Unfortunately, we won't have a choice for Senator as no serious candidate is challenging uber-establishment career politician, 1%-er, and authoritarian Dianne Feinstein. Orly Taitz is the only other name I recognized among the twenty-something on the ballot. She's a Tea Partier but an obsessive Obama birther who has zero chance. Give Gail Lightfoot, retired nurse and Libertarian, your protest vote.

Congress: Darrell Issa owns this district, and none of the other candidates appear to be mounting a serious campaign. Take your pick.

State Assembly: Sherry Hodges is the GOP establishment pick, and a lock to win. Take Rocky Chavez or Farrah Douglas as a protest.

Board of Supervisors: Dave Roberts. Steve Danon is Brian Bilbray's chief of staff, a creature of the GOP machine, and a real brown-nosing weasel. Dave Roberts is the deputy mayor of Solana Beach, a pension-reforming Democrat.

Prop 28: No. This is a sham term-limit initiative written by legislators to weaken the term limits passed by voters. California voters will probably fall for it.

Prop 29: No. Another $1 a pack tax on cigarettes. Taxes are already so high on cigarettes that people are buying in bulk out of state or on the black market. No more taxes until the state addresses the real fiscal problem: pensions.
Posted by W.C. Varones at 7:18 AM 18 comments:

Saturday, the Union-Tribune published a clarification on its city reserve data that showed Encinitas to be second-worst in the county.

The clarification notes that the U-T used the Standard & Poor's methodology of counting uncommitted reserves.  Encinitas has some accounts that are "committed" but not "restricted," which, to this layman's ear, sounds like money that is planned and designated for a specific purpose but not legally restricted to that purpose.  So if you count all the money that is committed but not restricted, Encinitas' reserves look better.

Jerome Stocks commented on the article:


In fact the City of Encinitas has three reserve funds amounting to nearly 40% of our operating budget. A contingency reserve $9.3 (20%) a $2.6 million Budget Stabilization Reserve (4%) and a $5.0 million Future Project reserve. And in reality none of that money is "restricted" in any way.

Leave aside the fact that all cities were measured by the same standards, and other cities measured up far better than we did. And leave aside the fact that whatever "reserves" we do have are not funded out of savings but by debt. The city still owes millions on the Hall Park, the library, and the fire castles; in fact, the city owes far more than any supposed "reserves" we hold.

City Hall-watchers know that the city has been struggling to come up with money to build the Hall Park. Insiders say the city has scratched together some $8 or $10 million, but the cost of just the first phase of the park will cost somewhere around $15 million.

Does the "Future Project" account include money they plan to spend on the Hall Park this year? If so, how is that a reserve? Are they counting the same money as both a "reserve" and capital for the long-overdue Hall Park? Inquiring minds want to know.

Knowing how Jerome Stocks loves to engage his constituents in web comments, I asked him about it. I'll let you know when he responds. 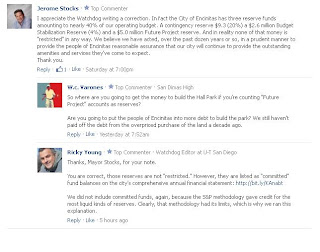