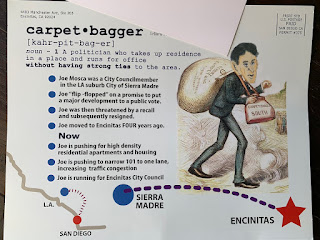 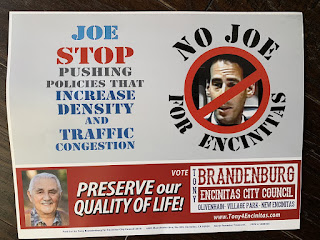 No on U flyer

Posted by Encinitas Undercover at 11:39 AM 12 comments:

Posted by Encinitas Undercover at 8:44 AM 43 comments:

Measure U supporters say it could increase the city's supply of low-income housing, while opponents say there's no guarantee that the proposed zoning changes actually will result in more housing for low-income families. They contend the upzoning will increase the town's housing density, but those new homes will be higher-cost units.

Posted by Encinitas Undercover at 8:45 AM 67 comments:

Modern Times Beer, which expanded up the West Coast this year with brewery restaurants in Los Angeles and Portland that both feature vegan cuisine, has returned to its home base to debut a new North County venue that’s also its first in the San Diego area to serve food. Rolled out over the weekend, The Far West Lounge lands on Highway 101 in downtown Encinitas where the space is open from 11 a.m. to 10 p.m. daily.

Decked out like a grandma’s living room circa the 1970s, the company spent hundreds of hours handcrafting design details that range from felted recreations of TV dinners to knotted macrame plant hangers and a bar facade made from 2,000 dominoes and Modern Times coffee-stained wood. There’s wall of stadium-style seating, a mini mart area that retails beer, coffee, and brewery merch, and a 40-seat, 34-tap bar that will pour Modern Times Beer from all of its brewery locations; a special Hazy IPA, called Totally Open in Encinitas, will be released here soon.

Posted by Encinitas Undercover at 10:28 AM 14 comments:

@SanDiegoPD There's a helicopter flying above us in #Encinitas mentioning a suspect... can't make out the rest. Any word on what's going on?
— Midori Bikinis (@MidoriBikinis) October 24, 2018


Authorities were searching for two suspects who fled a stolen vehicle after crashing into a parked car near a park in North County.

A vehicle was reported stolen Wednesday in Carlsbad, according to the San Diego County Sheriff's Department. The vehicle later crossed into Encinitas and crashed into a parked vehicle near Cottonwood Creek Park at 95 North Vulcan Ave., sheriff's officials said. The occupants, a man and a woman, then fled the vehicle on foot.

Carlsbad police and sheriff's deputies were searching the area for the suspects.

Still bitter over her opposition to the last-minute Clark Avenue housing switcheroo?


Kranz explains, I have worked alongside her opponent for months—and it’s no contest. Elizabeth is the superior candidate. She has depth—and wisdom—which comes from life experience. She has endured hardship and bounced back. Elizabeth has the kind of maturity that inspires collaboration and helps get things done. That’s a quality you want in a representative.

“Elizabeth also has a stronger—and more balanced—command of the issues. Her background as a lifelong journalist, community advocate, and organizing leader with national nonprofits, demonstrates that she can dive deeply into complex legislation and grasp nuances that others miss. Elizabeth has been a watchdog for constituents here and throughout the state. She not only understands what matters locally, but she’s fought for change on critical issues at the national and international levels—and won. Her years of leadership, organizing grassroots activists from coast to coast to stop a congressional vote on the controversial Trans-Pacific Partnership, show that Elizabeth is tenacious—she has what it takes to play in the big leagues."

A further statement at the end of the press release missing a quotation mark and attributed to no one in particular but presumably meant to be from Kranz:


I urge everyone in the district to vote for Elizabeth Warren. We need a mature, experienced, selfless, hardworking leader representing us in Sacramento.”


An Encinitas family detained a homeless man who possibly attempted to break into and rob their home, sheriff's officials said in a news release.

Fred Weston, the 62-year-old homeowner of the one-acre property on the 500 block of La Costa Avenue, was awakened by his surveillance system on his property at about 5 a.m. on Oct. 20, according to a news release written by Sergeant Joe Tomaiko of the San Diego County Sheriff's Department.

According to the news release, Weston's property had been targeted several times in the past by suspects stealing copper cable and wire, leading him to set up the surveillance system.

Weston then grabbed a shotgun and went outside to check the property, eventually encountering a man in dark clothing who was attempting to hide, Tomaiko said. Weston ordered the suspect — later identified as Chuck Neil, a 43-year-old homeless man from Escondido — to stand up, show himself and start walking to the front gate of the property.

The two men then entered an altercation, according to the news release. Neil was able to grab the barrel of the gun, which Weston shot while it was pointed toward the sky, Tomaiko said. Neil then punched Weston "several times" in the face, breaking his nose and causing Weston to fall to the ground, face first. Neil then began choking Weston with the barrel of the shotgun against his throat.

Posted by Encinitas Undercover at 5:34 AM 10 comments:

Please use the comments to record your observations.
Posted by Encinitas Undercover at 5:40 PM 41 comments:

The commission’s board, which is hosting its monthly roving three-day meeting in downtown San Diego, rendered its decision after two hours of testimony on a project that has polarized the community for more than a decade.

The commission also denied an appeal of the city’s approval of the project filed by a group known as the Encinitas Residents Coalition.

The project will dramatically transform the stretch of 101 into a bicycle-, pedestrian- and transit-friendly enclave complete with six roundabout intersections. 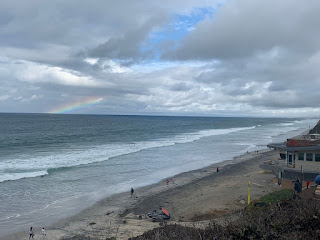 Posted by Encinitas Undercover at 11:35 AM 12 comments:

It was a great white

Laboratory results obtained Friday provided conclusive evidence that a white shark was involved in the incident, which took place on the morning of Saturday, Sept. 29, in the waters near Beacon's Beach. Eyewitness accounts had previously suggested the probability of a white shark's involvement.

Posted by Encinitas Undercover at 11:51 AM 3 comments: 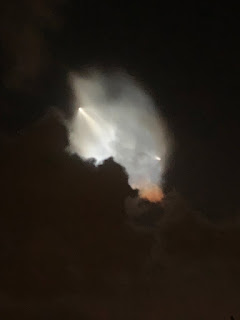 This was super weird. Only there for a minute and now gone.

Moving too slow to be airplanes. More like helicopters but with no sound, and super bright spot lights coming down from them. 7:30 pm.
Posted by Encinitas Undercover at 7:37 PM 5 comments:

A 76-year-old woman was fatally injured Friday night when she was struck by a Toyota Prius outside an Encinitas Fire Station, authorities said.

Investigators believe the pedestrian was crossing Balour Drive in front of Encinitas Fire Station No. 5 when she was hit by the northbound Prius, Rosas said.

That's just north of where an elderly man was killed in a crosswalk hit-and-run less than a year ago.
Posted by Encinitas Undercover at 1:06 PM 10 comments:


This week in a routine email to our City Engineer I received the attached response. Is our City Staff going through a revolving door or training people who now work in other cities?

Magdosku, we hardly knew you. 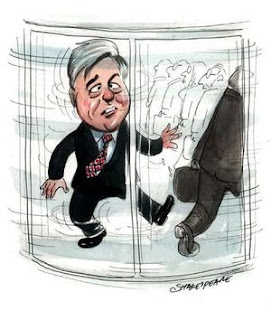 Radical redesign of El Camino Real in the works?


This is the summary of the news from the New Encinitas Network meeting last Thursday:

The California Coastal Commission issued a blistering 28-page response to the City of Encinitas that found the North Coast Hwy 101 Streetscape project to be in serious violation of the State of California Coastal Act. Ironically two dozen planning staffers have been forced out of the City of Encinitas in the past 18 months because they essentially refused to put their signatures on this plan for legal and safety reasons, as well as the CCC report makes crystal clear that the Streetscape project is designed to stop thru traffic, affecting the rights of California residents and visitors the ability to access North County beaches. The City submitted for an extension of time to cook up more numbers at a the Coastal Commission's September hearing in Ft. Bragg, Northern California and will try again at the next hearing, Thursday October 11, at the Wyndham San Diego Bayside, 1355 North Harbor Drive, San Diego.

The City Council (with the exception of Mark Muir) has directed planning staff to hire out the creation of a redesign of El Camino Real. The plan removes one vehicle travel lane in both the North and South direction between Encinitas and Leucadia Boulevard in order to make room for two 8-foot wide bike lanes replacing the outer vehicle driving lanes. The remaining two vehicle travel lanes are to be reduced from 14 feet in width to 10 feet in width. Bear in mind that the Encinitas Fire Department's hook and ladder trucks are 11 feet wide... This proposal also includes the implementation of a "staggered" pedestrian crosswalk that will be located between Via Moleno and Encinitas Boulevard that will be an unsafe pedestrian controlled sidewalk that strands pedestrians on the shrub-centered median strip. This will cause the stacking of traffic, endangering drivers at the stopped cars as accelerating drivers turning onto El Camino Real from Encinitas Blvd try to beat the red light camera. Also, a 6-Way "Continental" crosswalk will be located on Mountain Vista and El Camino Real. To date there has been no public discussion concerning the lane dieting, lane reduction, the two new bike lanes and the two potentially unsafe pedestrian crossing, the combination of which will dramatically increase traffic gridlock, carbon exhaust emissions and safety hazards for drivers and pedestrians. Reduction of vehicle access to businesses along Camino Real will also reduce profits and city revenue. As the California Coastal Commission's oversight extends to the eastern border of El Camino Real, CCC's refutation of the North Coast Hwy 101 Streetscape project may help residents and commercial property owners fend off this radical redesign. The city staff engineer assigned to the El Camino redesign, Christopher Magdosku recently resigned and took a position with the City of Chino. STC Traffic, Inc. Carlsbad, CA is the consulting firm engaged to develop the plans.

Additionally, the powerful non-profits bordering Quail Gardens Drive recently hired former council member Lisa Shaffer to lobby her council friends to use citizen tax dollars to essentially privatize Quail Gardens Drive. This might shed light on why the City L-7 (9.8 acre property) was removed from the preferred properties that comprise the newest Housing Element Up-Zoning Measure U that the Council hopes to pass in the election 5 weeks from now.

The next Traffic and Public Safety Commission Meeting is scheduled for 5:30 PM Monday October 8 at City Hall. We should have as many concerned residents mustered there as we can to speak against the proposed radical redesign of El Camino Real.

Posted by Encinitas Undercover at 6:25 AM 45 comments:

In addition to the lawyer Steven P. Chase who appears to be operating out of the old location of Moonlight Motors on Melrose, the company Flashbuz is connected online to reported founder Aaron Bruce of Neptune Avenue.
Posted by Encinitas Undercover at 3:32 PM 1 comment: