What did we miss?
Posted by Encinitas Undercover at 6:17 AM 45 comments:

At the Sept. 5 meeting, the task force — consisting of Mayor Catherine Blakespear; Deputy Mayor Tony Kranz; Planning Commissioner and former No on T spokesman Bruce Ehlers; and former Planning Commissioner Kurt Groseclose — had planned to winnow down the list of properties mentioned in the failed Measure T to reduce public outcry and increase the chance of voter approval.

However, as a result of the pending legislation, the task force must now find more vacant land to hit at least a 51 percent threshold, or between 550 to 650 units of high density housing on currently vacant land. The group will likely have to look outside Measure T's sites, as most of the sites designated on the failed Measure T map had existing development, either residential or commercial, already on them.

Posted by Encinitas Undercover at 8:17 AM 6 comments:


A mother struck by a hit-and-run driver while returning home from work Friday evening is fighting for her life.

Ashley Mullins, 33, was on her way to catch the coaster home from work at Lazy Acres in Encinitas around 7:30 p.m. when the crash happened.

The crash left the mother of two with serious injuries, her father Roger told NBC 7. Doctors gave her a "dire" prognosis. Mullins is at Scripps La Jolla Hospital's Intensive Care Unit with serious head, spine, pelvis and limb injuries, according to deputies.

Oddly, the sheriff's department doesn't seem to be getting a description of the suspect out to the public.

UPDATE: Man of average height in his 40's. White guy.
Posted by Encinitas Undercover at 10:53 AM 20 comments:


Lake Forest is doing what many cities aspire to do — it’s paying off its unfunded pension liabilities. The move is estimated to save taxpayers $3.4 million in interest costs over 30 years.

But Lake Forest is lucky: The city possesses that rare combination of being relatively new, being relatively small and being a relatively wealthy city. That means its pension liabilities will remain small in comparison to larger and older cities. But that doesn’t mean that these obligations can’t grow beyond a manageable level — and fast.

Posted by Encinitas Undercover at 8:45 AM 5 comments:

Sheriff’s deputies are looking for the driver of a white Ford F-150 pickup that hit a 33-year-old woman crossing Encinitas Boulevard, leaving her with critical injuries Friday night.

The woman was mid-block, walking south between Interstate 5 and North Coast Highway at 7:27 p.m. when she was hit by the westbound truck, witnesses told deputies.

The driver stopped the truck, got out of the vehicle, told some people nearby that the victim appeared to be OK, and then got back in the truck and fled, according to the Sheriff’s Department.


A young woman says she chased an intruder from her Encinitas home. When she began the chase, she had no idead he was armed with a knife.

Just before midnight Tuesday, Maria Medvedev was reading a book in her home on Little Oaks Road. She was startled by the sound of the side gate opening. Then, she saw and heard a shadowy figure race out of her yard.

Medvedev took off after him and found him hiding behind a truck in the street. She says he tried to convince her he was a neighbor, then took out of a knife and approached her.

Posted by Encinitas Undercover at 7:02 AM 5 comments:


Amtrak plans to cease its daily stops at the Carlsbad Poinsettia and Encinitas Coaster stations beginning Oct. 9, in part because of low ridership. Coaster service at the locations will be unaffected.

The two stops have the least riders of four North County locations where Amtrak initiated service four years ago, according to numbers provided by the LOSSAN Rail Corridor Agency, which oversees rail service between San Diego and the Central Coast city of San Luis Obispo.

Never a fan of the continual redecoration of his piece or of the "Cardiff Kook" moniker, [...] Antichevich said Thursday the city wouldn't have a repair problem if decorating discontinued.

"Make a couple of arrests and then it will stop," he said. "It breaks my heart that they do that."


A 61-year-old woman died after she was hit by a vehicle in a crosswalk in Encinitas Friday evening, sheriff’s officials said.

The reporting isn't clear, but it sounds as if the woman may have been crossing against the signal.

UPDATE: The victim is Carmen M. Gonzalez, who resided on Gardena Road near Santa Fe Avenue.
Posted by Encinitas Undercover at 6:21 AM 3 comments:

Please use the comments to record your observations.
Posted by Encinitas Undercover at 5:30 PM 13 comments:

A group of residents is appealing the Encinitas planning commission's decision to approve a beer-tasting room downtown in July.

The Encinitas Citizens Committee (ECC) will go before the city council, tentatively set on Oct. 11, in hopes to overturn the commission's approval of the opening of the 150-seat Modern Times Beer tasting room, which is set to open at 470 South Coast Highway 101.

A judge has ordered Rep. Darrell Issa to pay his opponent from last year’s election more than $45,000 in legal expenses fees incurred during a defamation lawsuit.

In November, Issa, a Vista Republican, sued Democrat Doug Applegate over attack commercials the congressman said hurt his reputation. In March, a judge said that Issa didn’t prove his case, but also sided with Applegate who argued that he was exercising his free speech rights with the television commercials, and that Issa’s lawsuit was an attempt to silence criticism.

Posted by Encinitas Undercover at 6:56 AM 3 comments:


The husband of San Diego County supervisor Kristin Gaspar says his wife's former opponent, Dave Roberts, defamed him and his business in an attempt to win the election.

Paul Gaspar, owner of Gaspar Physical Therapy, and one of his associates filed the defamation lawsuit in North County San Diego on September 6.

The lawsuit claims that Roberts, through his reelection committee, attempted to smear Kristen Gaspar in campaign mailers. The mailers accused Gaspar Physical Therapy — where Kristen Gaspar served as an officer — of elder abuse and medical malpractice.

The Roberts mailer was a sleazy, cheap shot about a settled lawsuit over actions by one of Gaspar's dozens of employees, something Gaspar presumably had no involvement in or knowledge of.

But defamation cases against public figures, particularly in election campaigns, are notoriously hard to win.

At the same time Gaspar's wife Kristin was running (successfully) against Roberts for county supervisor, Paul Gaspar was running (quite unsuccessfully) for Encinitas mayor.  He beclowned himself by sending campaign mailers dressed as a physician in lab coat and stethoscope despite being a physical therapist whose occupation does not generally call for such accoutrements. And Gaspar was earlier a central figure in the "We Love Encinitas" phony charity scandal.
Posted by Encinitas Undercover at 1:49 PM 19 comments:

Orpheus Park has a long history of tree lovers battling with neighbors who want unobstructed views.

A year or so ago, someone tried to kill some trees in Orpheus Park by cutting rings through the bark. 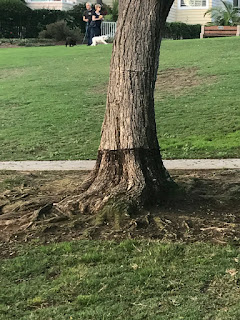 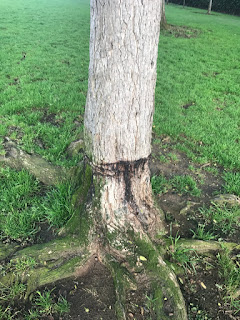 Fortunately, the trees seem to have survived the attack for now. No word on whether the likely suspects have been warned or visited by the cops.
Posted by Encinitas Undercover at 4:05 PM 11 comments: