Is SANDAG's board corrupt or just incompetent?

Voice of San Diego: SANDAG Staff Knew About 2004 Voter Deception But Didn’t Tell the Current Board:


In an investigative series, Voice of San Diego has revealed that SANDAG misled the public on two separate ballot measures. One was passed 13 years ago, after the agency told voters the tax would bring in far more than the agency actually expected.

After our stories, SANDAG staff has faced questions from its board of directors and the public.

To answer them, staff members dug into the situation. In November 2016, they produced an internal presentation that explicitly spelled out how the agency had drastically scaled back the amount it expected to raise from TransNet, a 2004 ballot measure. In recent months, SANDAG staff have made a series of pronouncements about what happened that now look questionable.

The presentation not only spells out that voters were misled on the 2004 ballot, as Voice of San Diego reported earlier this month. It also shows that agency staffers were aware of the 2004 deception last year, in the weeks just after the scandal broke. But as the agency worked to explain away new revelations, it never disclosed the 2004 issue to the board or public despite repeated opportunities to do so.

Encinitas' representative on the board at the time of both the 2016 deception and the cover-up of the 2004 deception was former ethics professor Lisa Shaffer. Shaffer fought vehemently to retain her SANDAG seat when former Mayor Kristin Gaspar attempted to appoint herself instead. Yet despite continuing to offer her opinion on public issues, Shaffer has not come forward to explain how she performed her oversight role while SANDAG was deceiving the public.

In December 2016, with Mayor Catherine Blakespear now representing Encinitas at SANDAG, staff gave a 37-minute presentation on the false forecasts. VOSD has board member reactions.
Posted by Encinitas Undercover at 4:20 PM 24 comments:


Encinitas has become the latest target in a series of demands for North County cities to abandon citywide elections in favor of electing council members by district.

And if history is any indication, Encinitas will be the latest city to begrudgingly make the electoral change.

The city received a legal demand letter from the law firm Shenkman & Hughes, the same firm that has targeted San Marcos, Oceanside, Vista and Carlsbad in recent months.

Attorney Kevin Shenkman, in the letter dated July 14, asks the city to voluntarily change its citywide election system or face litigation. Shenkman argues that the citywide voting violates the California Voting Rights Act because it dilutes the voting power of the city’s Hispanic residents — who comprise 13.7 percent of the city’s 63,000 population.

Shenkman’s firm, which represents a voting rights organization for Latinos, made similar demands in the four aforementioned cities.

In each case, the city chose voluntarily to create districts for future elections — including at least one district whose population has a Hispanic majority — as opposed to fight them in court.

Would it even be possible to draw a district with a Hispanic majority? Encinitas Hispanics don't all live in the same part of town.

As odious as the motivation to divide residents by racial background is, district elections could be a good thing if they result in the election of more neighborhood activists over candidates promoted by the county political parties.
Posted by Encinitas Undercover at 10:02 AM 25 comments:


Two Escondido men were taken into custody Friday in connection with an attempted kidnapping of a teenage girl in Encinitas.

The two suspects were identified as Christopher White, 27 and Jeremiah Owens, 28.

A Jeremiah Owens is on Facebook, from Escondido and approximately the right age. 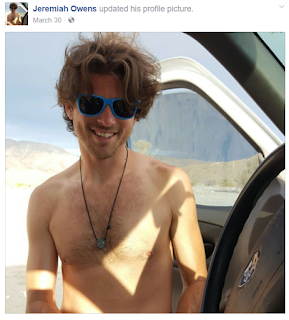 Owens is a Facebook friend of Christopher White, who describes Owens as his roommate. 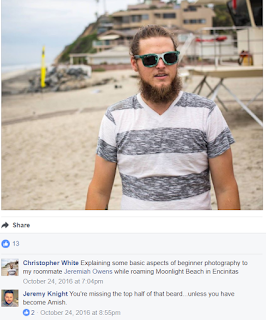 A limited online record search returned no criminal history for either man.

The 15-year-old victim is a long-time resident of Encinitas.

You have to be a special kind of stupid to try to kidnap someone in broad daylight, on a heavily trafficked beach street, in a neighborhood with lots of security cameras, in an unusually identifiable vehicle, and then to return to the same city in the same vehicle two days later.
Posted by Encinitas Undercover at 4:14 AM 8 comments:


Authorities on Friday detained the driver of a truck in connection with an attempted kidnapping of a teenage girl in Encinitas, officials said. Following a brief pursuit, the driver of the pickup pulled over in the 1500 block of Summit Avenue in the Cardiff area, several miles south of the site of the attempted abduction.

The attempted kidnapping happened around 5:30 p.m. Wednesday in the 1600 block of Neptune Avenue, according to the San Diego County Sheriff's Department. The 15-year-old girl said she was waxing her surfboard in the driveway of her home when a man came up from behind her, pinned her to the ground and tried to drag her toward a pickup truck parked along Grandview Street, where another man was waiting inside.

A teenage girl fought off a man, with another man waiting inside a nearby pickup truck, escaping an attempted kidnapping Wednesday in Encinitas, authorities announced. A sketch has been released of one of the two men wanted in the attempted abduction.

The incident happened around 5:30 p.m. in the 1600 block of Neptune Avenue, according to the San Diego County Sheriff's Department. The 15-year-old girl told deputies she was waxing her surfboard in the driveway of her home when a man came up from behind her and pinned her to the ground. She said the man tried to drag her toward a pickup truck parked along Grandview Street where another man, seen in the sketch, was waiting inside.

[Planning Commissioner Kevin Doyle] worried aloud about the lack of parking downtown, about the crowds that would flock to the proposed Modern Times tasting room, and tipped his hand that he’d vote against the proposal, all but sealing its fate.

"I'm not happy for anybody," Doyle said. "This situation is unfortunate. This is not an easy issue to wrap our heads around. This whole issue has really torn me up."

And then, his thinking turned. Fellow commissioners Greg Drakos and Al Apuzzo doubled down on their stance that Modern Times was everything the city could want in a property owner. Doyle changed course, sending up a round of applause from one half of the packed room.

The men went into the gas station Tuesday morning at 5:30 when the clerk was in the stock room, deputies said. One robber ran behind the counter and grabbed the cash register. The other man had a shotgun and pointed it at the clerk as he was walking out of the stock room, according to deputies. Both men ran away.


I will repeat what I advocated before. The City should enact Measure T as originally adopted by the Council (and yes, rejected by the voters) in order to stop the financial impact of the increasing number of lawsuits. Let the Prop A folks sue in order to get the court to proceed with its determination of whether Prop A or state law has precedence. Keep working on finding a strategy that the voters will approve and put in on a future ballot regardless, since we want a measure that is publicly supported, but in the meantime, let the measure go into effect and come into compliance with state law.

Not sure why Shaffer would rather side with developers and make the residents sue than side with residents and have the developers sue. If the city did a mass upzoning a la Measure T, there would be a flurry of permit filings for large luxury condo projects with inadequate parking. And permit approvals could be irreversible regardless of the eventual outcome of resident lawsuits.

Why not let the task force work to come up with a plan that is less destructive to Encinitas' community character and that, unlike Measure T, actually provides some affordable housing?
Posted by Encinitas Undercover at 3:27 PM 105 comments:


A development consultant has asked a Superior Court judge to enforce a provision of a lawsuit settlement with the city of Encinitas that would require them to adopt an affordable housing plan without a public vote.

DCM Properties, the namesake company of development consultant David C. Meyer, recently filed the motion to enforce the settlement between the firm and Encinitas, which stemmed from a 2016 lawsuit over, among other things, the city’s lack of an approved housing element.

A hearing on the motion is scheduled for 1:30 p.m. Sept. 8 in Judge Earl Maas’s courtroom.

[The city's housing task force] recommended a consultant to work with the city on the revised proposal, but recently has canceled meetings.

This was the final straw for his client, Abasto said.

“When was the last time they had a meeting?” Abasto asked. “They aren’t moving at an expedited pace. We believe this process is a sham.

The city's most recent July 6 meeting was cancelled and rescheduled to August 10.
Posted by Encinitas Undercover at 3:06 PM 105 comments: 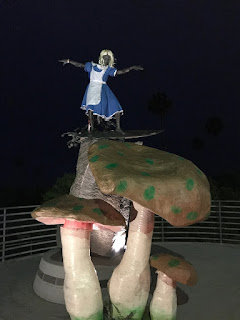 Feed your head!
Posted by Encinitas Undercover at 10:04 PM 5 comments:


Property owners who object to government-mandated restrictions on construction permits must litigate the issues before building their projects, or risk forfeiting their rights to take legal action, the California Supreme Court ruled Thursday in a case involving plaintiffs in Encinitas.

In a unanimous opinion, the justices ruled that plaintiffs Barbara Lynch and Thomas Frick, who own adjacent blufftop properties in the northern San Diego County municipality, gave up their right to challenge the California Coastal Commission’s conditions on a seawall project because they went ahead and had the structure built.


The San Diego County Sheriff's Department asked for the public's help Thursday in identifying a man wanted in connection with a burglary in Encinitas.

The incident took place on May 11 in the 400 block of North El Camino Real. A man wearing gloves broke into a dermatology clinic and stole $90. 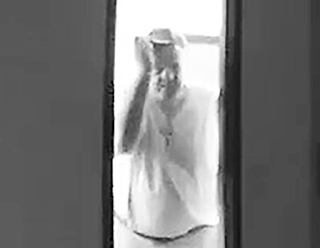 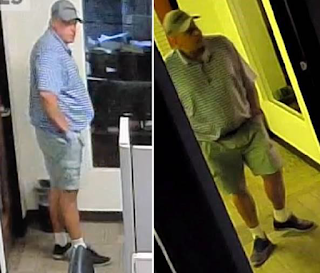 Posted by Encinitas Undercover at 9:21 AM 7 comments:

The San Diego County Sheriff’s Department is investigating a threat made against Encinitas Mayor Catherine Blakespear the evening of July 2, The Coast News has learned.

The message, which The Coast News has chosen not to publish, came from a disposable cell phone. The unknown messenger called the mayor “Cathy” and said they had dreams of committing violent sexual acts against Blakespear.

Posted by Encinitas Undercover at 6:31 AM 15 comments:

A 20-year-old Encinitas man is charged with setting three fires last fall at a church youth center, an administration building at a middle school near his home and at a preschool, according to a federal indictment unsealed Wednesday.

Tyler Carender allegedly began his arson spree Oct. 22 by setting fire to the Friendship House Counseling and Youth Center, which is owned and operated by Saint Andrew's Episcopal Church on Balour Drive.

When young adults commit crimes in Encinitas, we often wonder whether the perpetrator is a local trustafarian or a drifter. In this case, it looks more like a drifter.
Posted by Encinitas Undercover at 9:12 PM 5 comments: