What I Learned About Prop A at the Street Fair: The Negative Consequences 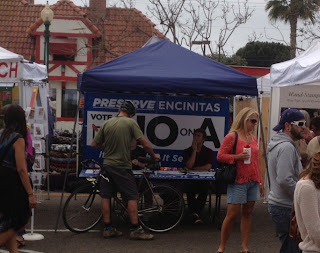 I stopped by the No on A booth at the street fair this weekend. It was manned by three young guys.

They told me that if Prop A passed there would have to be a "special election" if I wanted to build a second story on my house, unless I had a "lien" on my property that said I could go to two stories. All three of the guys were attentive to the conversation when this was said. They also said that the special election would cost hundreds of thousands of dollars to the taxpayers.

I did probe them on these statements. First, by asking if they had a copy of the initiative, so they could show me where it said these things. They did not have a copy. They did say there was a copy on their website. They couldn't really explain the "lien" thing, but did confirm they were talking about something that would be officially recorded.

They all said they were volunteers. I asked if they lived in Encinitas. One said yes, the other said he lived down the coast a bit, and the third's response was not clear to me. I asked the one who admitted to living outside the city what his interest was that drove him to spend a weekend in a booth. He said he was concerned about the taxpayers spending so much money on special elections and nothing else. 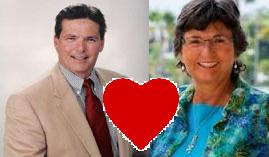 Now that Mayor Barth's position on development and the public's right to vote has "evolved," former mayor and Barth arch-nemesis Jerome Stocks has nothing but praise for Barth:


This thing, as written will be bad for Encinitas and you should join me as well as Mayor Teresa Barth and the entire Encinitas City Council, the Board of DEMA, the Board of Leucadia 101, and others in working to defeat this deeply flawed ballot measure.

Though he posted more than a dozen comments on his own Patch post, Mr. Stocks did not respond to the most pertinent question posed to him:


You wrote, "the verbiage in the initiative makes it supersede our current 22-26 limit"

I think that is wrong and nobody seems to want to defend that statement. Will you? Doesn't the general plan already have the same 30-foot height limit that you are worried about? Can you explain how it raises the 22-26 foot height limit on residential lots?

Why are both the current and former mayor afraid to answer such a simple question?
Posted by W.C. Varones at 5:15 PM 41 comments:

Questions for Mayor Barth on Right to Vote


A week after inquiring, Barth has responded to the question of what she sees as negative consequences of Prop A. A week later, simply pointed me to the ballot arguments (to be posted later) without anymore explanation. Many, if not most, of the negative consequences in the ballot statement are questionable. I've requested a meeting with the Mayor to discuss the validity of the objections in the ballot argument. I'm hoping that meeting will be an open meeting that the public could attend.

The council is reportedly planning to spend tens of thousands of our tax dollars on a propaganda campaign against the Right to Vote Initiative (likely unanimously, as dissent is frowned upon). If they are so confident in their position, how could they possibly be opposed to an open, public discussion?

Out with the old, in with the new 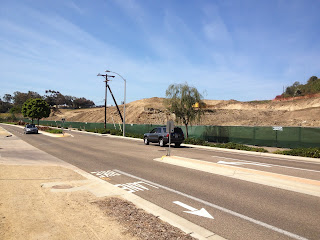 Big new development being graded all the way from Quail Gardens Drive to Saxony.
Posted by W.C. Varones at 1:46 PM 19 comments:

This year's tour is in Olivenhain.

Bring a gun.  You know how those folks get about their shrubbery. 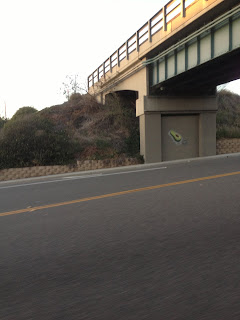 Well it ain't the Surfing Madonna, but even a simple guerrilla art avocado inspires the spirit.

At the Leucadia Blog:


There is already an existing, city-wide height maximum of 30 feet or two stories in the general plan! All the initiative does is reaffirm this and require a public vote to change this provision.

Does Al understand that the Municipal Code is subordinate to the General Plan and the Municipal Code can (and DOES) set building heights that are lower, such as the 22-foot and 26-foot limits in certain areas and under certain zoning. So what is the problem? 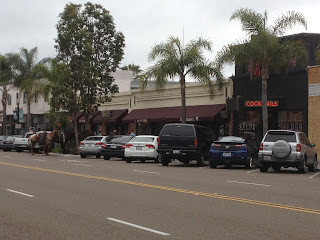 Read all about it at The Coast News.

Given the lengths of raiding other city accounts and taking on additional debt that the city had to go to just to come up with $15 million to build the Hall Park, it's remarkable that Barth and Vina are so complacent about being $39 million past due deadbeats on our pension obligations.


“I believe AB 109 is starting to have an effect on our crime,” [San Diego Police Chief Bill] Lansdowne said. He said lower numbers of police officers, because of budget cuts, were also a likely factor.

Within the county last year, Ramona saw the largest increase in crime — 28 percent — with 546 crimes reported in 2011 and 699 in 2012. Most of the crime was burglary and theft, said Lt. James Bovet, in charge of the town’s sheriff’s station.

Encinitas ranked next with a 23 percent crime increase, followed by Escondido, Solana Beach and Valley Center, each with 22 percent increases.

The biggest jumps in those towns occurred in aggravated assault, residential burglaries and larceny.

The AB 109 that Lansdowne refers to is Jerry Brown's cost-cutting "prisoner realignment" which has led to the release of violent criminals, some of whom have already gone on to murder.
Posted by W.C. Varones at 9:07 AM 40 comments:

Mayor Teresa Barth highlighted construction projects and a process for growth in her State of the City address April 5 at the Encinitas Community Center. 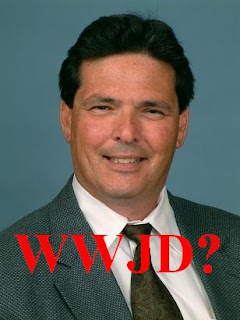 
An investigation was under way today into the death of a 43-year-old woman who was apparently intoxicated when she was struck by a car in Encinitas.

The pedestrian was struck in the 2600 block of South Coast Highway 101 about 7:45 p.m. Sunday, according to San Diego County sheriff's Sgt. Anthony O'Boyle. Paramedics took her to Scripps La Jolla Hospital, where she died, he said in a statement.

She and another woman apparently ran out in front of a Toyota Corolla driven by a 24-year-old man, who remained at the scene, O'Boyle said, adding the other woman declined treatment.

Three years ago, Marine Sgt. Thomas A. Elliott was killed in a fight outside the Kraken.

In February, the Encinitas City Council condemned so-called "assault weapons," which to our knowledge have never been involved in a fatality in Encinitas.
Posted by W.C. Varones at 3:52 PM 2 comments:

Comments posted by a gmail address that appears to be legitimately connected to John Upton's brother:

1actuator@gmail.
1 hour agoMy brother was unarmed. He was shot in the abdomen then while face down on the ground he was shot execution style in the back of his head. The so called "arguement" last week was actually a set up by the murderer who called the police on a peace keeping mission while my brother was sleeping... Premeditated "state of mind" alibi ? There are two eyewitnesses to the FIRST DEGREE MURDER

1actuator@gmail.
1 hour ago@the illegal... your relative ( the murderer ) was a person that people intentionally avoided in the neighborhood. Know for bizarre behavior ,leering and peeping into people's homes ( that's why he liked to chop bushes down around there fences.) Vilkin will never get out of jail and after he dies he will be judged. You're a real piece of work