Friends of the Cardiff Rail Trail:


The inability to establish a Quiet Zone at Montgomery is a tremendous blow. Without a Quiet Zone, trains will be required to sound their horns before they reach the crossing, resulting in a significant and unacceptable increase in noise for Cardiff residents to the north and south of Montgomery. The only way to stop the train horns is to install a system of wayside horns which are basically speakers mounted at the crossing site that blare out a simulated train horn sound as warning for an approaching train. Wayside horns would have less noise impact on Cardiff than train horns but may be unacceptably loud for the students at the nearby school and the residents in the surrounding houses, especially since the wayside horns sound for longer periods than the actual train horns. We need to know much more about wayside horns before we would support them as a substitute for a Quiet Zone.

We also have some concerns about aligning the completion dates for the rail trail fence and the crossing. We recently engaged all of the parties involved (the City Council, NCTD, and SANDAG) to advocate for coordinating the rail trail fence and crossing projects to ensure uninterrupted beach access in all reasonable scenarios. After a round of meetings and correspondence, we know that all the folks involved with these projects have empathy for the community and good intentions all around. There is a desire to work together to make sure there is no gap in beach access caused by staggered completion dates. However, there is still uncertainty. It’s unclear exactly how long the CPUC approval process for the crossing will take. Complexity is also introduced by having so many huge construction projects happening in the rail corridor at the same time (in addition to the rail trail and the Montgomery crossing, SANDAG is building a new railroad bridge across San Elijo Lagoon, double-tracking south of Montgomery, and overhauling the Chesterfield intersection). At this point it seems likely that the fence and the crossing completion dates will line up to avoid a gap in access because it makes sense to build the fence as the last component of all these combined projects. But there are a lot of moving parts and no guarantees. More work needs to be done here.

The combination of the Quiet Zone news and the uncertainty around project timing have caused us to rethink our near term priorities. While we love the rail trail as part of a tapestry of improvements that work together – connecting our communities and creating a network of safe and legal crossings at Chesterfield, Montgomery, and Santa Fe – we also believe that the Montgomery crossing is an essential part of the overall plan.

Our advocacy for the Cardiff Rail Trail is conditioned on preserving beach access, which is a core value for the Cardiff community and for us. At this point we believe we owe it to our community to temporarily shift our focus from advocating for the rail trail to advocating for a clear and credible plan for the Montgomery crossing that ensures beach access. It’s the right move for our supporters (who now number over 1,700).

For the record, our preference and our recommendation is to fund and build a grade-separated crossing at Montgomery Avenue to avoid the issues with Quiet Zones, wayside horns, and CPUC approvals. We understand that there will be additional cost involved but it’s the right answer.

"No" vote gains as absentees counted in Carlsbad Measure A

First update since election night from San Diego Registrar: more than half the outstanding ballots counted and the No lead has grown to more than 800 votes.

Barring some really bizarre distribution of late votes, it's looking pretty safe for the No camp now.

Please use the comments to record your observations.
Posted by Encinitas Undercover at 5:07 PM 31 comments: 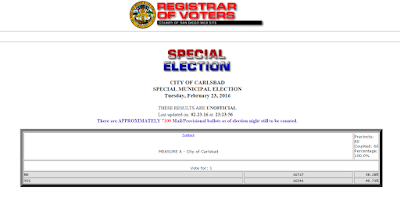 While the U-T is saying "defeated in unofficial returns", this is really still a tossup. There are 7100 absentee and provisional ballots to be counted and a difference of only 186 votes, and absentee and provisional ballots are often significantly skewed in the way they vote compared to the overall vote.  The 2012 SDUSD tax increase, for example, trailed on election night but ended up passing by more than 1%.

The vote is of interest to Encinitans for two reasons: 1) I-5 traffic generated by the mall would certainly cause congestion at times through Encinitas, and 2) the vote is an indication of area voters' attitude toward large-scale development, which could be an indication of how Encinitas voters will respond to the city council's high-density development plans this November.
Posted by Encinitas Undercover at 6:31 AM 18 comments:

From the Inbox. Coast News op-ed:


Everyone will lose if Encinitas City councilpersons continue to ignore the North County Transit District’s and San Diego Association of Government’s power plays. It appears that the leaders of these agencies know that Encinitas has never developed a long term plan for the rail corridor and are making their moves to lock in their desires before the city can complete one based upon the needs and wishes of its people.

NCTD’s goal is to double track and fence the right of way. SANDAG wants regional government to supersede local control. To accomplish their goals, they are dangling publicly funded carrots in front of our elected officials in the form of so called corridor improvements. They know that once installed these developments will make it nearly impossible for any substantial city plans, like trenching the railroad, to be fully implemented.

The mayor and councilpersons must not allow themselves and the city to be railroaded by the elected officials from the county and cities of San Diego, Chula Vista, Escondido, San Marcos, etc. who sit on the NCTD and SANDAG boards. These out-of-towners don’t care if our beach access is severed, that beach parking is drastically reduced, that our bluffs collapse, that our economic base is affected, and that our community character is destroyed. They just want their way!

Sadly, it appears that a majority on the Encinitas Council are oblivious to the plot and don’t see its danger. Unbelievably, at this time, five Encinitas rail projects are progressing without a Corridor Master Plan. It is piecemeal development at its worst. 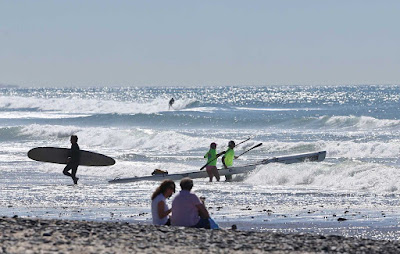 Surfers and kayakers share the beach as they enjoy the unusually warm temperatures Tuesday, Feb. 16, 2016, in Encinitas, Calif. California is having another day of unseasonable warmth before a low-pressure system brings rain and snow.

If summer weather in October or November is "Indian summer," what's summer in February? Australian summer?
Posted by Encinitas Undercover at 7:46 AM 9 comments:

While you were sleeping...


A man suspected of shooting up parked cars in Mission Hills and trying to rob an Encinitas gas station was arrested after carjacking a box truck in Torrey Pines and temporarily shutting down the Interstate 5 freeway early Tuesday morning.

At around 4 a.m., San Diego County Sheriff’s deputies responded to a reported knifepoint robbery at a Chevron station at 805 Birmingham Dr. in Cardiff.

The subject Lawrence Bruzynski is using the alias name of Larry Burns and identifies himself as President of The Crosby Centers. The Crosby Centers are ACTIVELY engaged in the solicitation of current and former NFL players to undergo treatment for concussion-related injuries using this website.

Bruzynski, using the alias name Larry Burns, was featured in a recent ESPN story which aired on January 31, 2015 titled: "Depression After Football."

Bruzynski has accumulated numerous convictions for felony FRAUD related violations. He has been convicted in federal prosecutions in Wyoming, Colorado, California and elsewhere. Bruzynski, a career criminal, is recorded under FBI Number 189372M7.

Anastasia Kirkeby, who identifies herself as co-owner of the Crosby Center was arrested in December, 2014. She was charged with multiple offenses, including operating a DRUG house and a firearms offense.

If you have any information related to this matter, you are requested to contact Supervisory Investigator Robert Brockway, California Department of Insurance, Orange, CA, tel. 714-712-7652.

You may also contact NFLPA Director of Security and Operations Tim Christine at 202-756-9102 or Tim.Christine@nflpa.com

Kirkeby was the owner of Olivenhain mansion that was the target of a spectacular but fruitless SWAT raid in 2014, and the site of a fatal fire six months later. The mansion was listed online as a drug rehab center, and online reviews refer to Larry Burns as a key figure there. Burns was sued by Kirkeby along with several banks in a lawsuit apparently related to the mortgage on the property.

Burns was featured in this ESPN story on treatment for former NFL players.  Kirkeby was sentenced to counseling, presumably not at the Crosby Center, for misdemeanor charges stemming from the SWAT raid.
Posted by Encinitas Undercover at 5:17 PM 8 comments:

Please use the comments to record your observations.
Posted by Encinitas Undercover at 5:08 PM 110 comments: 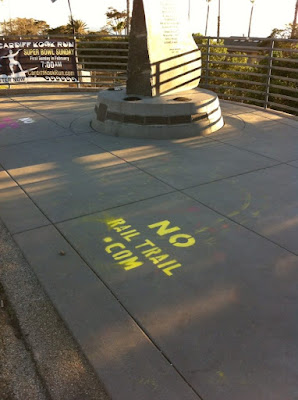 
For the first three years of the race, the business association and race organizers had a partnership agreement. Under that agreement, revenue from the runs paid for beautification efforts around the statue, including new landscaping. For this year’s event, however, Lebherz decided to go in a different direction and approached a citywide parks group — the nonprofit Patrons of Encinitas Parks organization — about a partnership.

“We just felt like we had accomplished all the stuff we had wanted to accomplish (around the statue),” he said.

The trouble is that he’s still using images of the statue to promote the race, Cardiff 101 MainStreet Association officials said. In the lawsuit filed in federal court, the association alleges that the organizers of the for-profit Cardiff Kook Run have knowingly used the copyrighted surfer images more than 25 times in recent months on race publicity without paying the association.

Lebherz said Thursday that he didn’t know until the legal dispute began that the surfer statue image was copyrighted. After being notified, he took down a billboard sign and agreed to stop using the image on other publicity materials once Sunday’s event concludes.

The Kook was despised locally and unknown beyond until local pranksters made it what it is today. I'm not sure why Cardiff 101 needs to get lawsuit-happy and demand a cut every time someone wants to use a picture of a statue on public property. Maybe the city should start charging Cardiff 101 rent for the use of public property if that's the way they want to play.
Posted by Encinitas Undercover at 8:06 AM 48 comments: