Coastal Commission to Leucadia Streetscapers: Not so fast!


Staff appreciates the responses, but remains concerned that the issues raised in the previous correspondence continue to raise significant Coastal Act and LCP consistency issues related to the public’s ability to access the beach or enjoy a recreational drive along the historic Coast Highway. Specific concerns include the following:

The reduction of traffic speed and the desired outcome of deterring cut-through traffic or traffic shifts from Interstate 5 most likely means that the time it takes to travel through the corridor on Highway 101 will increase. The Commission’s primary concern is that the increase in travel time will deter the public from traveling to Encinitas beaches from inland destinations. If it will take significantly more time for a member of the public to travel from their home to the beach and then to get back from the beach to their home, they may be less likely to use the public beaches in the City.

Additional serious concerns at the link.
Posted by Encinitas Undercover at 6:58 AM 142 comments: 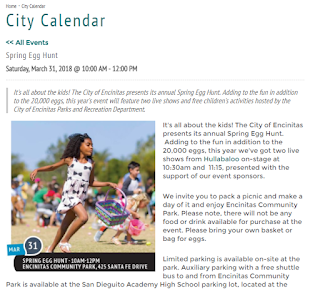 Posted by Encinitas Undercover at 8:17 AM 12 comments:

There’s an outdated view circulating around that California urban areas are lower density than those of the Northeast Corridor, according to New Geography, but a comparison of Census data shows coastal California suburbs more than double Northeast suburbs in density. 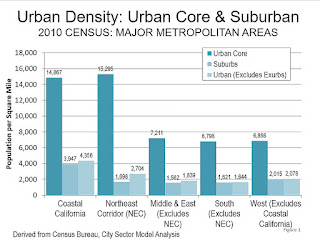 Given the already elevated level of density, proposals to cram more people into already settled areas of California could worsen the quality of life. California’s high urban densities are accompanied by the worst traffic congestion in the nation and some of the worst in the world. With plans in place and more proposals to increase densities, this can only get worse.

HT: Bubbleinfo
Posted by Encinitas Undercover at 10:22 AM 55 comments:


At its March 21, 2018 meeting, the Encinitas City Council approved a new four-year contract with the Encinitas Firefighters' Association. This replaces the previous contract which expired on December 31, 2017.

Meanwhile, the Encinitas $100,000 pension club already has 20 members.
Posted by Encinitas Undercover at 5:48 AM 67 comments:

Please use the comments to record your observations.
Posted by Encinitas Undercover at 5:10 PM 41 comments:

Posted by Encinitas Undercover at 8:01 AM 23 comments:


California law requires cities to keep emails for a minimum of two years, but half of the cities in San Diego County delete most of their emails from city servers in much less time — in some cases, within a few weeks.

A recent survey by Voice of San Diego showed that Encinitas and Poway have the shortest retention policy, deleting emails after 30 days. Del Mar deletes theirs after 60 days. Carlsbad, Escondido and Oceanside wait until the 90-day marker, while Solana Beach waits for 100 days, Santee for 180 days and Coronado for one year.

In justifying these policies, city officials argue that the law isn’t as clear on email retention as some would believe and they delete emails they view as non-public records to save taxpayer money. In the process, they’ve designated themselves the arbiters of what’s public and not public — a practice that troubles some of California’s leading open government advocates.

“It goes against what state law requires of them,” said Kelly Aviles, an attorney and vice president of transparency group Californians Aware, who reviewed Voice’s findings.


Dockless bike sharing, the novel idea that rolled out with a rough start in San Diego in February, could spread to North County coastal communities as soon as this summer.

The short-term bicycle rentals are based on a phone app, like Uber and other ride-sharing programs. Renters can pick up their bike in one place, such as a bus stop or train station, and leave it someplace else, maybe parked on the sidewalk outside their workplace, anywhere within the company’s service area.

Bike sharing is seen as a way to get more cars off the road, reduce pollution and greenhouse gases, and encourage more people to get out of their vehicles and exercise.

“One of the things we are trying to solve is that first-last mile in transit,” said Crystal Najera, an Encinitas climate plan administrator leading the group project.

An Encinitas man who left the scene of a crash that seriously injured a mother of two near Moonlight Beach was sentenced Monday to a year in jail and placed on probation.

Parker — whose probation will run three years — turned himself in about two weeks after the Sept. 22 crash that left 33-year-old Ashley Lane with a concussion and broken bones, and caused her to suffer three strokes, according to sheriff's officials.

The article doesn't say how much time Parker is likely to actually serve. After California's "prison realignment," many criminals sent to county jails instead of prison are serving only a tiny fraction of their purported sentences.
Posted by Encinitas Undercover at 6:24 AM 7 comments:


Encinitas officials appeared to reach consensus on whether to raise the percentage of affordable housing in developments, which currently stands at 10 percent.

The City Council and Planning Commission, appearing at a joint meeting dedicated to discussing the city’s inclusionary housing policy, agreed that the city should raise the percentage to 15 percent, among other things.

Paths will be built beneath the Interstate 5 overpasses at Santa Fe Drive and Encinitas Blvd.

The project comes just 10 years after a San Dieguito student was killed at the Santa Fe underpass.
Posted by Encinitas Undercover at 4:17 PM 33 comments:


Here’s the scoop: Handel’s Homemade Ice Cream and Yogurt filed a lawsuit Monday in federal court that accuses a franchisee of going rogue and using the company’s trade secrets to open an unauthorized ice cream parlor in San Diego.

Kenneth Schulenberg, who operates a franchise in Encinitas, Calif., executed a lease to construct an ice cream parlor in San Diego that would compete with his Encinitas franchise, according to the complaint filed in U.S. District Court.

Posted by Encinitas Undercover at 9:40 AM 14 comments:

Good News!! Last night, the Planning Commission unanimously approved the Leucadia Streetscape project. We had 25 speakers. Twenty speakers were in support. Three indicated support, but were concerned with traffic overflowing onto Vulcan. One asked for the item to be continued for additional analysis and one was opposed based concerns with emergency response time delays.

It was a tremendous team effort. Anna Yentile introduced the project, Stephanie Keller orchestrated the staff and consultants behind the scenes, and Roy supported the Planning Commission.

We are on schedule to present the project to the City Council on March 21st.

Have a great weekend

Posted by Encinitas Undercover at 6:32 AM 67 comments: