City Council either wants to protect, or prosecute, homeless sleeping in cars

This unintelligible article in the SD Reader:

[...] The latter lobbying shop is run by Jonathan Clay, whose now-retired father Ben did similar chores for the county, port, water authority, and other government agencies.

Other current clients of the younger Clay include the City of Encinitas, which seeks to “prohibit local agencies from enforcing laws and ordinances, or otherwise subject to civil or criminal penalties, the act of people sleeping or resting in a lawfully parked motor vehicle. While a vehicle may be ‘lawfully parked’ in a residential neighborhood or in the parking lot of a business, that does not mean that it is acceptable to have people live there. The issues raised...are less about parking, and more about the use of vehicles for human habitation, including sleeping and ‘resting’ in front of existing homes and businesses.”

The headline implies the opposite of the first quoted sentence that the city seeks to prohibit enforcement. But then the rest of the quote backs up the headline's pro-enforcement view.

Which is it? Does the city want to punish or protect the homeless sleeping in cars? Who is the San Diego Reader quoting, and why are they arguing against their own position?

You'd never know it from the Reader, but I believe the real story is that a proposed state law would prohibit enforcement, and the city is opposed to this proposed law (i.e. the city wants to keep enforcing laws against homeless sleeping in cars).

Journalism these days.
Posted by Encinitas Undercover at 9:30 AM 17 comments:

Please use the comments to record your observations.
Posted by Encinitas Undercover at 5:18 PM 8 comments:


A Capri Elementary School parent is accused of slashing another parent’s face with a broken bottle at a fundraiser for the school over the weekend.

The alleged incident occurred on March 25 at the Hilton Del Mar, where the Encinitas school’s PTA was hosting its Run for the Roses Spring Auction Gala. What was advertised as a “fun evening out with other Capri Families” turned violent when a fight allegedly broke out between the two fathers.

“There was a dispute between two parties,” said Officer Billy Hernandez of the San Diego Police Department, which is handling the case. “During the dispute, the victim was struck in the face with a glass.”

Paul Pfingst, the suspect’s attorney, said his client was provoked when the victim insulted the client’s wife.

"His wife was subjected to intolerable insults and that was caused this whole sorry event to take place,” Pfingst said, adding he would not repeat the comments that were made.

"State of the City" speech tonight

At the Senior Center, hosted by the Chamber of Commerce.
Posted by Encinitas Undercover at 4:07 PM 12 comments:

Please use the comments to record your observations.
Posted by Encinitas Undercover at 5:02 PM 98 comments:

Friends say Jade Erick was a “free spirit” who was as beautiful on the inside as she was outside. She was also interested in holistic health, but that interest may have contributed to her death at the age of 30.

Erick died after a bad reaction to turmeric, a spice used in Indian food and in dietary supplements, that was dripped directly into her veins through an I-V.

According to the San Diego County Medical Examiner the cause of her death was “: anoxic encephalopathy due to prolonged resuscitated cardiopulmonary arrest due to adverse reaction to infused turmeric solution”. A spokesperson confirmed the turmeric was delivered through an IV.

Posted by Encinitas Undercover at 6:57 AM 29 comments:


Encinitas has been hit with yet another legal challenge to Proposition A and the city’s failure to adopt a housing element update.

This time, a group of attorneys specializing in affordable housing law on behalf of the low-income community has issued a letter to Encinitas demanding it adopt a housing element by March 30, or be sued.

The four-point legal demand dated March 15 argues that the city has repeatedly failed to meet it’s state requirements to zone appropriately to meet its regional affordable housing needs. The letter then takes aim at Prop. A, the 2013 voter initiative that requires a public vote on major zoning changes or changes to the Housing Element, which the attorneys argue directly conflicts with state law.

“By continuing to require voter approval to adopt an updated housing element, the city continues to be without a housing element that complies with applicable state law, and will not be in compliance for the foreseeable future,” the letter states.

It should be pointed out to the supposed affordable housing advocates that adopting Measure T against the will of the voters would require zero affordable housing, and would result in the development of primarily luxury condos and vacation rentals, none of which would appear to help Ms. Del Rose. Whereas if they took a chill pill and allowed the Blakespear-Ehlers task force to develop a plan, there would be actual affordable housing requirements.

Posted by Encinitas Undercover at 6:39 AM 52 comments:


In the Gaslamp Quarter, San Diego Police set up a checkpoint near the San Diego ShamROCK block party. Of the 1,699 vehicles that passed through the checkpoint, police screened 76 vehicles, SDPD officer Tony Martinez.

During those screenings, 18 drivers were detained for further evaluation, with six being arrested.

In the North County, San Diego Sheriff's deputies stationed a DUI checkpoint in the 1800 block of South Coast Highway in Encinitas from 7:30 p.m. to 1 a.m. Saturday.

Of the 878 vehicles that passed through that checkpoint, 41 were sent to secondary screening. During those screenings, 11 drivers were evaluated for being under the influence, of which eight were arrested - five for alcohol-related impairment and three for drugs impairment, according to SDSO deputy Brenda Sipley. 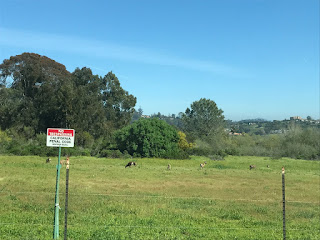 
A man who tried to kidnap a 7-year-old girl outside a Solana Beach school two years ago pleaded guilty Thursday to kidnapping and assault with intent to commit molest.

Jack Henry Doshay, 24, a member of an affluent Fairbanks Ranch family, will be sentenced to 10 years and four months in state prison on May 31. He will also be required to register as a sex offender for life.

Doshay’s father, Glenn, is a minority shareholder of the San Diego Padres.

Posted by Encinitas Undercover at 7:10 AM 12 comments:

This afternoon.
Posted by Encinitas Undercover at 4:47 PM 54 comments:

The number of trains traveling through the Carlsbad is about 50 per day, and that number may double by 2030, so the city is considering its options to increase safety and reduce future noise as more tracks are built.

In an interview with KPBS, Carlsbad City Councilman Mark Packard pointed to a January 2017 feasibility study he said shows that it’s beneficial to put an additional train line in a deep trench.

“When we saw (the second track) coming, we realized that this is our one chance, as the double tracking is being done, to put it down below grade where it ought to be, or leave it at street level and suffer the impacts,” he told KPBS.

Meanwhile, the Encinitas City Council canceled yet another regularly scheduled council meeting.
Posted by Encinitas Undercover at 8:56 AM 35 comments:


The San Diego Association of Governments is looking for a law firm with experience investigating white-collar crime to determine how overly-optimistic sales tax forecasts ended up in a ballot measure, and if people knew predictions were wrong but failed to speak up.

In an executive board meeting on Friday, the regional planning organization decided to create a three-member subcommittee to help hire the law firm, and to publish a request for proposals to advertise for the lawyers.

Encinitas' representative on the board of directors overseeing SANDAG at the time SANDAG was deceiving the public was former ethics professor Lisa Shaffer.
Posted by Encinitas Undercover at 6:04 PM 33 comments:

Please use the comments to record your observations.
Posted by Encinitas Undercover at 5:43 PM 18 comments:

Cities should brace for huge rise in pension costs


New Sacramento City Manager Howard Chan is putting together his first budget proposal, and you might think with the improving economy, he would be able to hand out cash to this program or that.

Instead, he’s warning department heads not to expect many of their pent-up requests, he’s focused on increasing revenue and cutting expenses, and he’s looking at least five years down the road.

There’s a very good reason: Higher pension costs are on the way because CalPERS lowered its expected investment returns. Sacramento’s additional payments are projected to rise from a manageable $3.2 million in 2018-19 to a frightening $29.4 million in 2022-23.

“It keeps me up at night,” Chan told The Sacramento Bee’s editorial board this week.

If the higher CalPERS contributions aren’t the stuff of nightmares for city and county officials across the state, they should at least be a big worry. The League of California Cities calls the pension issue the biggest obstacle facing every full-service city in the state. It is urging its members to run the numbers and to start taking necessary steps. It says some cities may have to consider hiring freezes and service cuts. Even then, the league warns, some cities might eventually veer dangerously close to bankruptcy.

Even the much higher costs coming the next few years will likely not be enough, as experts warn that CalPERS' accounting and assumptions are still far too aggressive.

Encinitas has $154 million in unfunded liabilities according to a conservative Stanford analysis.
Posted by Encinitas Undercover at 6:29 AM 53 comments:


As a 50-plus year resident of Encinitas I'm still waiting for one cost benefit analysis of spending millions for the addition of more bike lanes. Just one blind survey (one that can't be overwhelmed by social media) of people who actually bike to work. Or how about a survey just of the actual amount of bicycle traffic by season and hour.

Anecdotally, what I see during the week is mostly retired types exercising and on the weekends larger groups exercising along our highways/streets. Consequences I/we do know are more frustration. More time (something we can't ever get back) sitting and driving in our cars.

More CO2 emissions because cars are less efficient when idling at longer stop signals/signs because of narrowing of roadways. How about a survey/study of air quality in the road corridors. These could be done easily by putting particulate measuring devices along 101 in town. The city owed it to the residents to do a real cost benefit analysis instead of what appears to be "feel good" governance.

Posted by Encinitas Undercover at 7:25 AM 109 comments:

No, Millenials don't want to live in high-density urban apartments

The reality? Not really. Union-Tribune:

“We definitely want a house because we want to have dogs,” she said. “And kids someday.”

Hataishi’s hopes aren’t far off from her peers. A pair of studies released this week suggests that the majority of millennials want to live in the suburbs, have already started buying outside urban areas, and base their homebuying decisions mainly on affordability.

Reports by Zillow and Harvard break with stereotypes of America’s largest generation, namely that they prefer to rent because they favor experiences over building equity and want to live in urban environments.


Texts and emails sent by public employees on their personal devices or accounts are a matter of public record if they deal with official business, the California Supreme Court ruled Thursday in a unanimous decision hailed by open-government advocates.

The City of Encinitas has a long history of hiding public documents from the public.
Posted by Encinitas Undercover at 8:45 PM 8 comments: 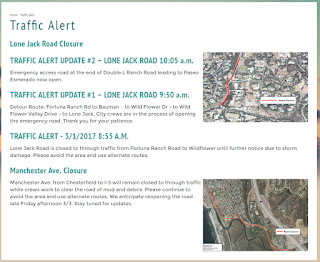 
A section of Lone Jack Road gave way under a dump truck in Encinitas early Wednesday, a sort-of sinkhole that will cause days of road closures and construction work in the city’s Olivenhain area.

The truck got stuck — a front tire sank nearly to the front bumper— when the pavement collapsed on the westbound side of two-lane street. The incident, about 450 feet south of Fortuna Ranch Road happened at roughly 2:30 a.m. 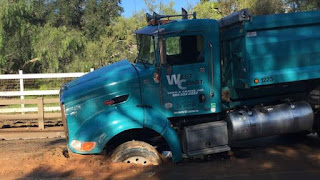