The strange case of Dr. Biter

The mysteriously suspended, then supported by his patients, then reinstated, then resigned, OB/GYN Dr. Robert Biter speaks out.

There's obviously much, much more to the story, but don't hold your breath.
Posted by W.C. Varones at 6:12 PM No comments:

Last month we commented on recent sightings of swarms of bees in Encinitas. Since then, we've seen a swarm over Highway 101 at D Street.

Yesterday a landscaper at Manchester and El Camino Real disturbed a hive and was killed by hundreds of bee stings.

The victim was 54-year-old Marco Tulio Lazaro, a longtime gardener at Wiegand Ranch.
Posted by W.C. Varones at 6:00 AM 2 comments:

Labor Department: government workers live much better than the people who pay their salaries


In a national story that echoes the situation in Encinitas, government workers get not only much better benefits and job security, but much higher pay as well!

Hope you enjoy barely scraping by so that Encinitas city workers can retire at full pay at 55!
Posted by W.C. Varones at 5:51 PM No comments:

Michael Pattinson of Barratt American whines about the banks

In an op-ed in the Salem News, the president of bankrupt developer Barratt American (builder of Leucadia's Rancho Tyvek Estates -- "Come for the tiny lots, stay for the low-income housing next door") complains that it's not fair that some people on Wall Street recognized the housing bubble and bet that it would burst, or that some banks stopped lending to overleveraged developers as the housing market cratered.

The developer industry spent millions of dollars lobbying Congress to keep the housing bubble going with tax incentives, lax lending standards, and easy credit from an alphabet soup of government and quasi-government agencies including FHA, Fannie Mae, Freddie Mac, and the Federal Reserve. I didn't hear Mr. Pattinson complaining as he was getting rich from the funny-money-fueled bubble. In fact, Pattinson was a frequent contributor to the industry's lobbying PAC.

The housing crash was the inevitable result of the greatest asset bubble in the history of the world. Any builders who were overleveraged at the peak of the biggest bubble in history have only themselves to blame for their demise.

Pattinson's argument is equivalent to saying that Bernie Madoff's Ponzi scheme was a good thing, and the only problem was that investors stopped giving Madoff money to keep the Ponzi going.

Pattinson should stop trying to shift the blame to those who recognized the bubble, and apologize for the wreckage that his industry has caused the entire economy.
Posted by W.C. Varones at 5:40 PM No comments: 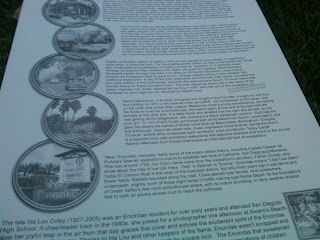 ... in this Encinitas 20th Anniversary poster (from 2006) being given out by the Leucadia Town Council at the Environmental Fair today.

Really? The most flattering image you can come up with to represent New Encinitas is a Target and Office Depot sign?
Posted by W.C. Varones at 11:22 AM 1 comment: 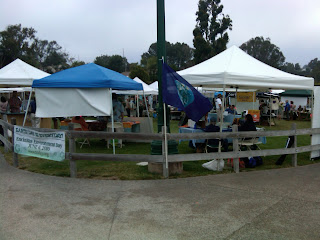 Highlights were a talk and video from the Urban Homesteading guy who has a monster garden on a normal size lot in Pasadena and the music of Sene Africa playing with local guys JZMN.

Teresa Barth was there with name tag on, and I saw someone who looked like Maggie Houlihan, but I didn't see any of the good ol' boys.

Deputies chased a pickup truck-load of gang members Saturday from a stabbing and baseball-bat beating in Encinitas, and eight people in the pickup were injured when it crashed in Carmel Valley.

Deputies went just before 1 a.m. to the 800 block of Clark Avenue in Encinitas, where a man was being beaten with a baseball bat, San Diego County sheriff's Sgt. Darrell Strohl said. When they arrived, they spotted a truck matching the suspects' vehicle leaving the area.

He said deputies tried to pull the vehicle over, but the driver took off southbound on Interstate 5. After driving south through Del Mar, the driver exited the freeway and then crashed into a tree and a cement patio wall of a townhouse in the 2100 block of Carmel Valley Road.

Six adults and two juveniles were hospitalized, two with serious injuries, according to the sergeant.

San Diego police Officer David Stafford said the two were thrown from the back of the truck, and one suffered serious head injuries.

Strohl said six suspects were treated and arrested on suspicion of assault with a deadly weapon. One of the adults resisted arrested and was bitten by a police dog, Strohl said.

He said the 18-year old victim they had assaulted suffered stab wounds in addition to the baseball bat injuries, but he is expected to survive.


The victim is allegedly a gang member living in Encinitas courtesy of Habitat for Humanity.
Posted by W.C. Varones at 6:08 PM 16 comments:

At the gates of Heaven 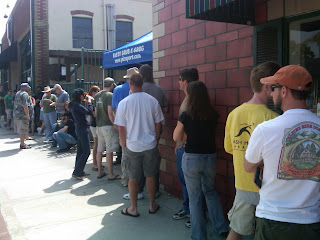 Lining up to enter the Carlsbad Pizza Port Real Ale Festival
Posted by W.C. Varones at 10:53 AM No comments:

Dirty NorCs to descend on Encinitas

Encinitas, halfway between San Clemente and San Diego, is a vestige of classic California beach culture that has all but succumbed to stratospherically priced homes inhabited by a generation to whom "working on myself" means attaining washboard abs rather than enlightenment. But partly because Swami's Beach remains a holy grail to hard-core surfers, good vibrations endure here.

Diversions include watching world-class surfing, exploring the 100-year-old downtown and meandering in soul-soothing gardens. If you need a vacation from life as well as work, this is the place.

Encinitas Cafe, Kim's, Swami's, and Pipe's are the restaurants mentioned. The Ocean Inn in Leucadia gets a favorable review. The public-transpo-hating NorCs suggest arriving by car rather than by train or bike.
Posted by W.C. Varones at 4:30 PM No comments:

... on El Portal Street. According to the Coast News, the guy who took out the power pole on May 23 blew a 2.5 on the breathalyzer. That is an amazing 31 times the legal limit of 0.08.

The new world champion was not named but was 22 years old. 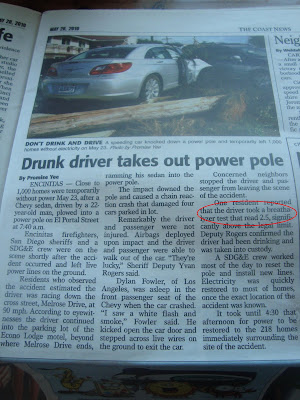