They really take that Old West stuff seriously in Olivenhain. Remind us not to rustle any horses out there.


Within the past week, Vilkin said that Upton had threatened him and that he called the San Diego Sheriff's Department to report it. That incident was the reason he had a gun with him when he went back to his property Thursday, said Vilkin.

Vilkin said Upton was obsessive about privacy and had demanded he not cut the greenery, even though Vilkin said the greenery is on Vilkin's property.

10News called the sheriff's Homicide Unit to confirm Vilkin's story, but they said they were not commenting on the matter.

On the day of the shooting, Vilkin said he was trying to cut some shrubbery on his own property, but Upton came out of his house and confronted him.

According to Vilkin, Upton pulled out a gun and told him to stop cutting.

Vilkin, who was also armed, said he pulled out his own weapon and shot Upton once in the stomach. To his surprise, Vilkin said Upton kept coming at him and that's when he said he shot Upton gain, this time in the head.

"I shot him; you know, I predicted him to fall immediately because this is a .44-caliber Magnum. He did not, he did two or three steps toward me and then I shot him in the head," Vilkin said.

Business as Usual at City Hall

Dietmar Rothe in the Coast News:


It has only been a few months since our new City Council took office.

We, the tax paying citizens, had great hopes that the new council members would bring fresh air and light into city chambers darkened by shameless backroom dealings.

Recent council meetings have shattered that expectation. It is now only too painfully obvious that pro-development and special interest groups still hold their 20-year-old stranglehold on our public resources, expecting to reap huge profits on taxpayers’ expense and feeding on the public trough, while destroying the unique character of our five communities forever.

Pick up a copy of Coast News this weekend and read the whole thing. Dietmar lays out plenty of evidence of backroom dealings as usual.

In related news, the council has written the opposition to Right to Vote, and still has not committed to showing us their alternative before the vote. Bait and switch, anyone?
Posted by W.C. Varones at 9:58 AM 40 comments:


A person of interest was detained after a man was found dead with a gunshot wound to the head Thursday morning, according to Lt. Clayton Lisk, of the San Diego Sheriff's Department.

This is believed to be Encinitas' first murder of 2013 and the first since September's vehicular fratricide.

UPDATE: A dispute between neighbors?


It happened around 9 a.m. in the 2900 block of Lone Jack Rd., Reportedly it may have been a confrontation between two neighbors.

The victim, who reportedly suffered a gunshot to the head, died at the scene. His name was not immediately available.

As of late morning, deputies had several people in custody for questioning, Lt. Mike Munsey said. It was unclear if the detainees were considered suspects or witnesses, according to Munsey.

UPDATE: According to Fox 5, the man's body was found here on the dirt path between 2926 and 2916, and the man was wearing a jogging suit. 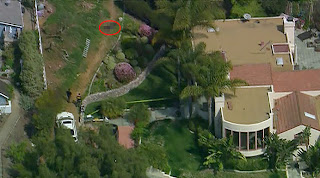 UPDATE: The U-T reports that a "family spiritual adviser" said that the victim had saved thousands of Romanian children. That sounds like filmmaker John Upton, who lives about a quarter mile a way and could have been using the path on a morning run.

A weapon was also recovered.

“We believe he’s involved, but we are not exactly sure what the dispute was and the nature of the dispute that led to this,” Bolwerk said. He added that there were no outstanding suspects.

Vilkin owns a vacant lot near where the shooting occurred, according to property records. Authorities said it was unknown if the victim and Vilkin knew each other prior to the encounter.

Vilkin went through city planning in 2009 and 2012 for demolition and redevelopment of a house at 2920 Lone Jack that had been damaged by a hillslide.

Officials and the dead tree media are still not naming the victim. If it is John Upton, here is more about his significant charitable accomplishments.


Upton’s brother, Michael, said there appeared to have been an ongoing dispute between the men — possibly involving trees.

“I can’t imagine why somebody would want to shoot my brother in the head,” Michael Upton, of Clairemont, said Thursday evening as he drove to the site of the slaying.

“He was a good man. He saved a lot of kids,” the brother said of John’s enormous rescue effort of Romanian orphans. “Here’s a guy who went into a communist country and basically didn’t allow himself to get bullied by the government and corrupt people over there. And he took these kids who were crippled from birth defects from trying to be aborted, and brought them back to the United States to get medical care and get adopted.

“My brother was a fearless crusader.”

The slaying was a double-blow for the family. Upton’s mother died just hours earlier Thursday of natural causes.

In this undated biography from the social media site Helium, Vilkin describes himself as a founder and college administrator at the unwieldily named and apparently defunct "www.business-school-online.us."

While the iconic SoCal burger joint is eagerly awaited by its fans, some local residents are concerned about traffic at the already congested intersection.  No doubt many Carlsbad commuters and visitors from Orange County and LA  will pull off the freeway for a Double Double.

It's a valid concern, but it doesn't seem reasonable to deny the replacement of an unpopular restaurant with a popular one just because more people will want to go there. 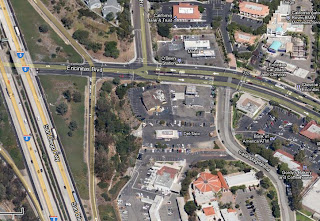 And this site, unlike the Leucadia I-5 Starbucks/Subway complex approved by the last city council, has adequate parking.
Posted by W.C. Varones at 4:48 AM 22 comments:

Council coming around on Right to Vote?

The first public commentary from the council since the vote to oppose the Right to Vote Initiative came in this morning's weekly newsletter from Mayor Teresa Barth. She writes:


Our council discussion brought agreement to eliminate the 4/5th super majority exemption, a change we felt should be implemented regardless of the June ballot results. Also, support for my suggestion to add General Plan Updates to our existing voter approval requirements, changed my initial reluctance to take a council position on the Right-to-Vote initiative. I agreed to be on the subcommittee with Councilwoman Gaspar to write the statement against. It is my intention to include the council's commitment to these changes, including placing those changes on the Nov. 2014 ballot for voter approval (which would prohibit future councils from changing the codes) in the council's statement.

Councilman Tony Kranz has also indicated support of a cleaned-up, substitute right-to-vote ballot measure on the November 2014 ballot. It's a welcome signal from the council. If the supposed flaws in the current initiative are real, let's have the option to vote on an improved version.

Any replacement right-to-vote initiative would obviously have to be finalized and approved by the council before the June special election. Otherwise, they'd be selling us a pig in a poke.

3-0 with Shaffer abstaining and Muir absent. After Shaffer's abstention, city attorney Glenn Sabine clarified that her abstention would count as a Yes vote.

At 3:53:40 of the video, Kranz asks about whether they can have further discussion about the type of firewall to be used in the project. Sabine immediately shows him who's in charge:


The communication has to take place within the context of this proceeding, and we want the proceeding to end tonight, and you're going to have to make a decision on that.

Things that make you go hmmm...

If the City Council actually supported the spirit of Right to Vote and only opposed the initiative due to supposed "flaws," why wouldn't they put a second initiative on the same special election ballot that was clean, stripped out the flaws, and addressed solely the central problem of the 4/5 council supermajority loophole?


The Encinitas City Council voted Tuesday to order a special election for the "Right to Vote" amendment to the Encinitas General Plan and Zoning Code.

In addition, the council created a subcommittee—consisting of Mayor Teresa Barth and Councilwoman Kristin Gaspar—to write the ballot's argument against the initiative.


Determine if the Council wishes to take an official position on the initiative and appoint two members to prepare an argument against on behalf of the Council.

The two issues contain many parallels. Both pit residents against developers, and in both cases, city staff has weighed in squarely on the side of developers.

We're about to learn a lot about the character of our new City Council.

Letters: No on Desert Rose development

On Wednesday, March 13, at 6 pm, the Encinitas City Council will hear an appeal of the November 1, 2012 Planning Commission decision to reject a 17-lot Density Bonus project in Olivenhain on Desert Rose Way.

The Planning Commission denied the developers plan to convert Dana Rullo Stables, a 7-acre equestrian boarding and riding facility, into a high-density housing project. The Planning Commission, in a vote of 3 to 2, found this proposal unsafe, unsuited for the lot they wish to develop, and inconsistent with Olivenhain's community character and the City's General Plan.

In a rural area currently zoned for lots with a minimum of half-acre per housing unit, the proposal under consideration has 10- ft. front setbacks, 5- ft. side setbacks, and substandard private roads with reduced parking. This project, as presented, would be enclosed on 2 sides by an 8-foot-high, solid firewall. The walled-project would provide a single drivable exit for evacuation in the event of fire. The proposed secondary fire escape route is a dirt footpath over a creek and through the adjacent Carlsbad Open Space.

More than 40 mature trees, including Torrey Pines, would be destroyed if the Planning Commission decision is overturned, and applicants have threatened that they will not clean up the wetlands on the northern and eastern boundaries of the property unless they are granted waivers including smaller-than-usual lots, narrow private roads, the fire wall, reduced set back requirements, and a reduced wetland buffer. They have threatened litigation if the project is not approved. While claiming to be environmentalists, the developers/property owners were cited with wetland violations that may have contributed to the poor condition of the wetlands.

We believe that the City Council Should uphold the Planning Commission's decision and that reversing that decision and approving the project will set a far-reaching precedent which threatens all of Olivenhain with similar high-density projects. Please join members of Save Desert Rose at the City Council meeting next Wednesday at 6 pm, and support our shared concern for protection our community character and of irreplaceable resource.

Right to Vote seen bringing about the Apocalypse

Just as predicted, the pro-developer attorneys hired by the city to report on the Right to Vote Initiative have produced a fear-mongering report.

The report can be found here. The Executive Summary begins on page 21.

Not explained in the report is how the Apocalyptic visions compare to the experience of Escondido, which successfully implemented a similar initiative (Proposition S) fifteen years ago.
Posted by W.C. Varones at 5:13 PM 35 comments:


Sheriff's officials Friday released an updated sketch of a man suspected of exposing himself in Cardiff-by-the-Sea on four occasions since November.

The most recent incident was reported shortly after 11 p.m. on Feb. 12 in the 2200 block of Carol View Drive near Birmingham Drive, according to the San Diego County Sheriff's Department.

The suspect was spotted after he walked out from under the stairs of an apartment complex—nude except for a gray sweatshirt tied around his head, according to a sheriff's department statement. He then allegedly engaged in a lewd act, sheriff's officials said. 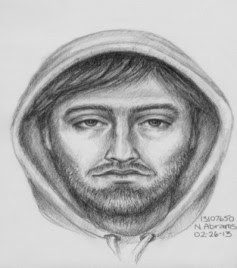