In the U-T, Lisa Shaffer and Tony Kranz share their thoughts on their first year in a roundup of freshman council members around the county.


Asked to expand on the highlights and disappointments, Shaffer emailed the best part has been “a new kind of leadership on the City Council.”

“I think we have created a new expectation of civility and respect,” she said, “and it has enabled us to work together across differences.”

As for disappointments, she said she was “sad at the divisive tone and misleading messaging” at the Proposition A special election last June.

We share Shaffer's sadness at the divisive tone and we wish we could remember who was responsible for the misleading messaging. Kranz emphasized the positive impact of strategic planning:

Her colleague Kranz said: “Looking back on my first year on the City Council makes me feel very grateful for the opportunity to serve my community. I’d say that the council’s biggest decision this year, one that will position us for future success, was to engage in a strategic planning process in order to establish next year’s budget priorities for both operations and capital improvement projects. “One of the frustrating parts of governing is how long it takes to get things done. But I’m looking forward to this next year, when we’ll be implementing some new ways for the public to contribute to the conversation.”

Posted by Encinitas Undercover at 8:23 AM 194 comments:

City and contractor face fines of $430,000 for dumping sediment into Rossini Creek at the Hall Park

Read all about it here.  Full complaint with photos here.

When a culture of cronyism and incompetence is tolerated at city hall, stuff like this is bound to happen.

Encinitas Guerrilla raises the specter of the Manchester strawberry fields being paved over for a Park & Ride (hat tip: Dr. Lorri).

Funny, we had heard the city's Smart Growth politicians and developers were eyeing that land for high-density housing.  Rumor is that the council is working on one or more mass-upzoning ballot initiatives, to include the strawberry fields.

Which will it be?  A Park & Ride or high-density housing?  Maybe a little of both?

How are we supposed to "Buy Local" food when all the local agriculture land is being turned into parking lots, apartment buildings, and offices?
Posted by Encinitas Undercover at 3:30 PM 114 comments:

She did a solid job at Patch, with good local news coverage.  Since she left Patch (about a year ago?), it's gone to more generic, non-local fluff.

Congratulations to Marlena on the great new gig!
Posted by Encinitas Undercover at 4:28 PM 133 comments:

Dear New Encinitas folks,
Below FYI is an idea I have submitted to the whole Encinitas City Council and the Encinitas Traffic Commission.  I want to send it along to you as a representative of many New Encinitas residents for your review.  Perhaps a plan like this one could be developed to present to the city to try to reduce the El Camino Real traffic gridlock and make a more community friendly space in the process.
Thanks,
Ed Wade

Often when reading on national political issues, we're struck by parallels to local politics. Most recently:


Caretakers maintain the status quo, a task that boils down to throwing a fiscal bone to every politically powerful constituency and doing so in a manner that does not create career-threatening blowback.

Caretaker politicians take credit for things that would have happened even if they'd lost the election and some other caretaker politician had held the office: the new school would have built anyway, the strike settled one way or another, and the nation would have exited from the unpopular discretionary war.


Caretaker politicians are fine if the voters are happy with the status quo and there are no long-term problems being ignored. But neither of those are true in Encinitas, are they?
Posted by Encinitas Undercover at 8:49 AM 83 comments:

Remember the "Smart Growth" dream of Pacific Station, that all these people would live close to public transportation and not use cars and not create Global Warming?

How's that working out?

Here's the entire frontage of Pacific Station at 7pm on a recent weeknight. Lots of dark windows. Where are all those working families cooking dinner after hopping off the Coaster? 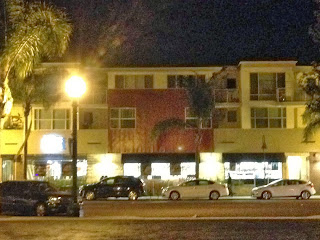 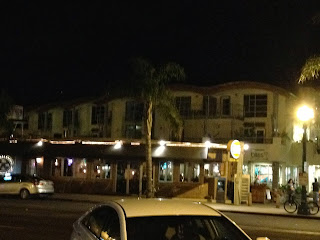 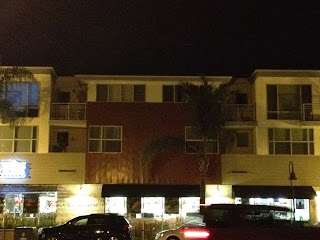 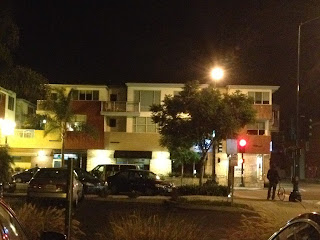 In fact, only one unit across the entire frontage showed any sign of life at all, the faint glow of a TV screen.

Then again, when you're selling 2-bedroom condos for $945,000, the bus-riding working class isn't really your target market. More likely they're owned as speculation and second homes for the rich from LA, Arizona, and beyond, who burn ungodly amounts of fossil fuels every time they visit!

Ever get the feeling this whole Smart Growth thing is just a scam to create big profits for developers?

To be fair, the cheaper units in back overlooking the railroad tracks appeared better-occupied. If the city really cared about Global Warming and "affordable housing," maybe they'd work with the state to require all units in density bonus projects to be affordable on median household incomes. Didn't some of the new council members pay some lip service to pushing back on density bonuses?

Regarding “Encinitas panel to study golf course issues” (Oct. 22), the U-T portrays the Encinitas Ranch Golf Course as some benevolent entity that pays its special local taxes only if it is doing well.

I have lived in Encinitas Ranch for 13 years, and paid my fair share of “special taxes” each year no matter how well I was doing financially. When do I get to create my own private “slush fund” to defer any down years I may have?

Forgive the pun, but something is not up to par on the coast when the City Council can approve a plan to rob us of more tax dollars to support a failing golf course that coincidentally just got new sand traps and upgrades.

Background on the ERGA scandal here.
Posted by Encinitas Undercover at 6:41 PM 52 comments:

The "workshop to help asses" 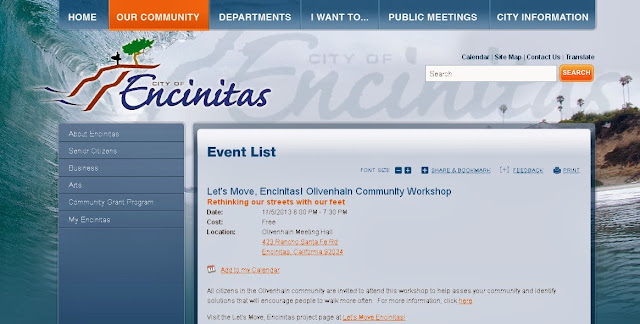 
Was reviewing the budget document for FY 2013-2014 & FY 2014-2015 and found an oddity. On page 1-6 is the Council's strategic plan. The budget was approved by the Council June 12, but the strategic plan was presented to the Council and the public July 17. Must be goblins at work.

Is this another Wizard of Oz moment like when Vina contracted for the Rutan & Tucker report long before being authorized to do so, when we see that Vina is making all the decisions and the council's role is just to rubber-stamp approval of his actions after the fact?

Excellent!
Posted by Encinitas Undercover at 5:23 AM 166 comments: