One question for them: 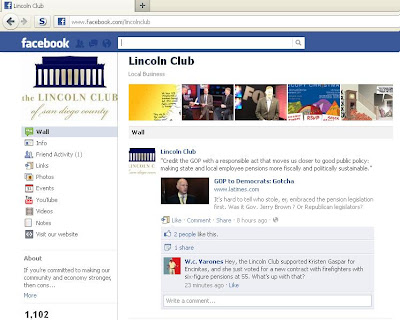 Rumor is the allegedly fiscally conservative Lincoln Club is going to dump big money into the campaign of Jerome Stocks, father of the 2005 35% pension increase.
The Lincoln Club funded the smear campaign against Teresa Barth and Tony Kranz, who just happen to be the two Encinitas leaders to have spoken out against the latest pension giveaway.
Posted by W.C. Varones at 9:14 PM 1 comment:


A proposal to subdivide the Paul Ecke Ranch flower-growing property into three parcels, but keep all of the land in agricultural use, will be debated during a special hearing Tuesday.
[...]
Dichoso has been telling people that the proposed subdivision won't change the land's agricultural zoning.
"Basically, we're redrawing the property lines," he said.

If you believe three different farmers want to buy pieces of that property to grow flowers on, I've got a bridge to sell you.
Posted by W.C. Varones at 8:31 PM 3 comments:

Bizarro town: Encinitas "progressives" are its only fiscally responsible leaders

Nationally, it's generally true that Republicans side with taxpayers and at least give lip service to controlling spending, while Democrats are allied with government labor unions and support lavish spending and benefits.

Not so in Encinitas. Republican Jerome Stocks voted for the huge 35% pension increase in 2005, and he is joined by Republicans Kristen Gaspar and Jim Bond in the Gravy Train Giveaway of 2012, giving 12% raises to firefighters already making well over $100,000 a year, far more than the median household income in Encinitas.


Tony Kranz, a Leucadia resident told the council that more detailed information should have been available to the public. “This is a very complex subject, especially with respect to retirement,” he said. “You really haven’t spelled it out to the public.”

“It’s still not time to give them a raise,” Kranz said. “There’s still the same liability to the community.” While Kranz said he supported and applauded firefighters, he disagreed that the savings were as high as anticipated. “We have an unfunded liability that’s going to bite us in the end,” he said, referring to the cost of pensions.

Councilwoman Teresa Barth said she could not support the actual contract. While her stepson is a firefighter in Los Angeles County, and she respects the work of first responders, she said the city had more pressing financial considerations.

“We’re faced with a lot of difficult decisions up here,” she said.

In light of the national economic situation and the high number of capital improvement projects in the city’s pipeline, the contract did not provide enough short-term realization of funds to gain Barth’s support.

The contract passed 3-1, with Barth opposed and Muir absent.

Yet another Ponzi scheme alleged in Encinitas

Again?  Is Encinitas the Ponzi capital of America?

First there was Scott Bottolfson.  Then there was John Clement's EdgeFund.

Hamilton's representations to investors were materially misleading. In reality, Hamilton never invested any investor money in real estate loans secured by deeds of trust or certificates of deposit or in the construction of a new FedEx distribution facility in Nevada. Instead, Hamilton used the money he raised from these three fraudulent offerings to pay his personal living expenses. In order to perpetuate his scheme, and to make his purported investments appear successful, Hamilton also used a portion of the monies he raised to pay fictitious returns to investors when, in fact, his investments were non-existent and he was simply using investors' monies to pay other investors. In all, Hamilton raised approximately $1.6 million from at least 23 investors through his fraudulent offerings.

Here's what those firefighters made two years ago before the new 12% pay and pension increase (click to enlarge): 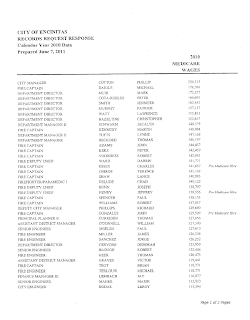 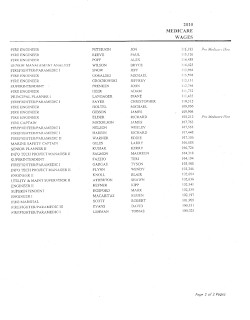 That's thirty-some firefighters making over $100,000 a year in this little town that rarely has a fire.

And thanks to the Great Jerome Stocks Pension Giveaway of 2005, and now the apparent Stocks/Gaspar/Muir Pay and Pension Increase of 2012, we're going to have to pay those folks six figures for life, plus free health care for life, when they retire at 55.


School trustees in Encinitas took a step Wednesday toward selling the Pacific View site to a nonprofit group that wants to turn it into a community arts center.

If the deal goes through, it would end years of speculation and public conflict about how the oceanview property should be used, which peaked in October, when the district sued the city over zoning for the site.

Baird said Wednesday the city would drop the suit if negotiations with Art Pulse are successful.
April Game, executive director of Art Pulse, said she is "beyond optimistic" about the sale.

Here's Art Pulse.  Yeah, it's a little New York - La Jolla hipster doofus, but it would be a hell of a lot better than high-density condos.

Fortunately, we've got more silly stories than serious crimes in Encinitas. A couple this week:
Encinitas schools on lockdown over homeless guy not on campus with toy gun:

Four Encinitas schools were briefly locked down Thursday as a precaution after reports that a man in the area was possibly armed with a gun.
San Dieguito Academy high school, Ocean Knolls Elementary, Oak Crest Junior High and St. John’s School were put on lockdown just before 9 a.m., sheriff’s Lt. Jeff Maxin said.
A code enforcement officer spotted the man in a transient camp in a canyon off Melba Road, Maxin said.
Deputies later located the man and found that he had a toy gun, Maxin said. He said the lockdown was lifted about 9:25 a.m.

Who knew there was a transient camp off Melba?
And somebody made a wrong turn onto the train tracks Tuesday night:

Authorities said a crash in Encinitas in which a freight train smashed into a car on railroad tracks may have been alcohol-related.
No one was injured in the crash, which occurred near E Street and South Vulcan Avenue about 10:45 p.m. Tuesday, said San Diego County sheriff's Sgt. Robin Lawrence.
Witnesses told investigators people inside the car got out and fled the area before the crash, Lawrence said.
"It is suspected this incident was DUI-related,'' the sergeant said in a statement. Sign up for FOX5 Breaking News alerts
There was major damage to the car and minor to moderate damage to the freight train, he said.

From the inbox, along with a note that the city and/or SDG&E have already been digging and kicking up toxic dust for weeks: Hall Park Toxic Dust
Posted by W.C. Varones at 4:09 PM 13 comments:

Last year, we discussed the Encinitas Union School District's plan to use 30-year debt to fund iPads for 4th graders.

Well, the 30-year debt has been issued and the iPads have been purchased and distributed. Sources tell Encinitas Undercover that the iPads are a big hit with the kids, so much that many kids now prefer playing Angry Birds over playground games and social interaction with their peers.


"The media you use make no difference at all to learning," says Richard E. Clark, director of the Center for Cognitive Technology at USC. "Not one dang bit. And the evidence has been around for more than 50 years."

Almost every generation has been subjected in its formative years to some "groundbreaking" pedagogical technology. In the '60s and '70s, "instructional TV was going to revolutionize everything," recalls Thomas C. Reeves, an instructional technology expert at the University of Georgia. "But the notion that a good teacher would be just as effective on videotape is not the case."

Many would-be educational innovators treat technology as an end-all and be-all, making no effort to figure out how to integrate it into the classroom. "Computers, in and of themselves, do very little to aid learning," Gavriel Salomon of the University of Haifa and David Perkins of Harvard observed in 1996. Placing them in the classroom "does not automatically inspire teachers to rethink their teaching or students to adopt new modes of learning."

Click on over to read the whole thing, but it comes down to two points:

1) It's the content and the teacher that matter, not the medium. Better a good teacher with a chalkboard than a program on an iPad.

2) Technology purchases are pushed by the corporations like Apple who profit from them.

Encinitas homeowners who just got 30 years of debt to pay off, you've been had.
Posted by W.C. Varones at 6:31 AM 9 comments:

After Fukushima, I'm not so comfortable having that thing just up the coast. You know they're storing dangerous spent fuel rods there because the politicians can't agree to put them deep underground in Nevada?


After an unplanned, precautionary shutdown of a reactor at the San Onofre nuclear plant Tuesday, a plant spokesman said Wednesday that a possible leak in one of the reactor’s steam generator tubes could have resulted in a tiny release of radioactive material into the atmosphere.

While the nuclear operator – Southern California Edison – says that only a tiny amount was released, and would pose no health problems, that’s what operators always say after a nuclear accident.