Please use the comments to record your observations.
Posted by Encinitas Undercover at 5:37 PM 6 comments:

Pedestrian killed by train in Leucadia

A pedestrian was struck and killed by an Amtrak train in Leucadia Wednesday morning.

Investigators believe the pedestrian, whose age and gender were not immediately available, attempted to cross the tracks while the crossing arms were down and was struck by the train, Vickery said.

North County Transit officials implemented a “bus bridge” to help passengers get to their destinations while train service was halted.

The tracks were reopened between the Poinsettia and Encinitas stations by 8:35 a.m., but North County Transit officials warned that delays were still possible due to restricted speed through Leucadia.

Meanwhile, Carlsbad to lower train tracks.
Posted by Encinitas Undercover at 11:26 AM 18 comments:

It's been awhile since we had a City Council meeting. Should we just declare a housing and bike lane emergency and do away with them?
Posted by Encinitas Undercover at 5:39 PM 116 comments:

Bingo is a fun game of chance that anyone can play!

Listen at a City Council meeting for the words below, get four squares in a row in any direction, and you have Bingo!

Watching the meeting from home?  Post BINGO! here on Encinitas Undercover.  Attending in person?  Print this sheet for the meeting – then get ready to yell BINGO! 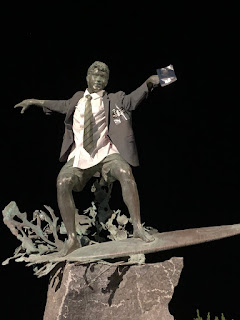 When we last heard from the mayor's husband Jeremy Blakespear, he was launching profanities at Kristin Gaspar for criticizing the SANDAG Director Hasan Ikhrata's goal to track and tax drivers' use of San Diego County roads.

At last month's decision to take away bike lanes on 101 through Cardiff, via Facebook:


San Diego cyclists, in coming months when you cruise the coast in Cardiff, either on your own, in pairs, or in a group, and wonder where your bike lane went to, .. well here's your answer.
The Encinitas Mayor's husband referring to you as "antiquated and self-interested".

When you find yourself dodging pedestrians, strollers, tots on razorboards and dogs on leashes on the west side, or swerving around plastic bollards and accumulated junk on the east side, just know that you, like the local bike clubs, the Encinitas Bike Walk society and TRUE cycling advocates in attendance, are simply "antiquated and self-interested" .

Here's the YouTube.
Posted by Encinitas Undercover at 8:41 AM 15 comments:


Is this the influence of our new City Attorney Leslie Devaney?  Perhaps she convinced the council the lawsuit will prevail.  Little Encinitas has little to gain if it does win.

Another example of virtue signaling.

On Oct. 8, deputies armed with a search warrant entered the home, a “granny flat” behind where Cowan’s mother and brother live, the prosecutor said. The deputies found “evidence of a violent struggle,” including a broken stick and broken bottle, [Deputy DA Marnie] Layon said.

They found Lukosky’s body on the bed. She had been dead for more than two weeks and with a gash on her forehead. The autopsy revealed her ribs were broken and she had been strangled, Layon said.


A warrant for Cowen’s arrest was issued Oct. 11. The Fugitive Task Force found Cowan, who has a criminal record, in Riverside County.

Investigators learned that Cowan had spent a few days there in late September with a former girlfriend, Layon said. Afterward, he spent time with another ex-girlfriend — with whom he has three children — who also lives in Riverside County.

Layon alleged that that woman and her father took Cowan to the Israeli consulate in Los Angeles to try to get a visitor visa. When Cowan learned it would take months to secure such a visa, the prosecutor said, Cowan set his sights on going to New York.

Posted by Encinitas Undercover at 7:17 AM 8 comments:


A pit bull owner and recent transplant to Encinitas received a not so nice welcome upon moving into her new digs, saying she was bullied and harassed so much by her neighbors over her two dogs that she felt pressured to move out within days of moving in.

Janis Sandlin, owner of Surf’s Pup Doggie Lounge, moved from Ocean Beach to a triplex in Leucadia last month. She said on her first day there, her neighbor to the left, a new mom, made it clear she was extremely upset Sandlin and her pups were there.

Sandlin met her other neighbor a few days later and said they had a much nicer conversation, but the outcome was the same — that neighbor was worried her dogs would bite her friends if they came over.

As of last Wednesday, Sandlin found a new place to live in Cardiff, which she called “wonderful.”


The City of Encinitas Parks, Recreation and Cultural Arts Department is looking for the community's input to name a new park. The City announced the naming campaign this week for the 3.1 acre Standard Pacific Park site located at the southeast corner of the intersection of Piraeus Street and Olympus Street in Leucadia. The City has criteria for naming public places that includes:

The City will be gathering names from the community via an online survey. Visit the Standard Pacific Park site webpage at www.EncinitasCA.gov/StandardPacificParkSite between October 14 and November 1, 2019 and click on the park naming button.


Please submit your suggestion in the comments below as well! 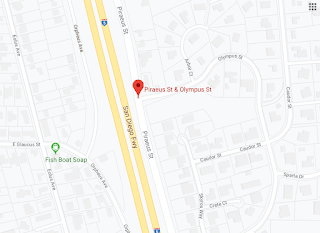 Posted by Encinitas Undercover at 9:14 AM 23 comments:


A woman was found dead in Encinitas Tuesday night, prompting an investigation.

Shortly after 5 p.m., after receiving a call about a foul odor, deputies obtained a warrant to search a home in the1200 block of Summit Avenue, according to the San Diego County Sheriff's Department. Inside a smaller structure behind the main residence, deputies found the woman's body. Sheriff's homicide detectives were called in to conduct an investigation.


The woman's identity has not been released, however Lt. Blevins said a vehicle was found near the residence that belongs to a reported missing person.

The missing person has been identified by family and friends as Sabrina Lukosky. She was reported missing on September 20.

According to friends, Lukosky lived on the property with her boyfriend and the boyfriend’s mother.

Friends and family said no one has heard from Lukosky for nearly three weeks. 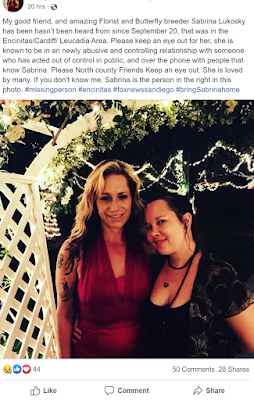 
A decomposing body discovered Tuesday evening in Encinitas was that of a 43-year-old woman who died by homicide and whose mother reported her missing last week, a sheriff’s lieutenant said Wednesday.

The cops are saying nobody is a suspect yet, but obviously the boyfriend is the suspect. He's not in custody, and yesterday cops were "still looking for one more witness they wish to take a statement from," so it's possible he's on the run.

UPDATE: Boyfriend Henry Simon Cowen, 41, arrested in Riverside. The mother who refused to allow the police welfare check appears to be Sally Cowen, a longtime resident of the La Veta and La Mesa neighborhood north of Moonlight Beach.


In 2010, Cowen was arrested on assault and kidnapping charges in Lacey, Washington, about an hour southwest of Seattle, on accusations that he tied up and tortured a man over an argument about marijuana.

According to court documents obtained by the Union-Tribune at the time, the victim called 911 and reported that he’d been tied up and beaten for several hours in a home invasion before he was able to escape. Officers reported finding the victim at a neighbor’s house with several bleeding cuts as well as abrasions and swelling to his face and neck.

Cowen allegedly told police he “lost control” and forced the victim into a kitchen chair, using phone cords and hoses to tie him up, and then began “beating and cutting him with a knife,” according to the documents.

A judge sentenced Cowen to 12 months in jail on one charge and eight months on another charge, according to the online court records.

Seems like you should get more than a year and change for kidnapping and extended torture. But what do I know?
Posted by Encinitas Undercover at 9:19 AM 12 comments:

This is not your father's Leucadia.


Near the gorgeous Pacific coastline of upscale Encinitas California, is Alcove, an exclusive enclave of 13 new homes that will inspire the very best of beach living. This beautiful new home community is centrally located and close to unspoiled beaches, phenomenal shopping and dining, and sensational attractions like the San Diego Botanic Garden, Legoland, and the Carlsbad Flower Fields. When it’s time to hit the road for work or play, the 5 and 78 Freeways are close at hand. Alcove represents a rare opportunity to enjoy the benefits and amenities of a new home. Beautiful enclave with a unique street scene consisting of a diverse architectural palette including Mid-Century Modern, California Contemporary, Bali and Plantation design. Enjoy Open Concept Living Space, Gourmet Kitchen, Spa-Like Master Bath, Walk-In Pantry, Outdoor Living Space, Spacious Loft, Walk-In Closet, Spacious Laundry Room and Highly Appointed Finishes.


Last week a coalition of cities led by Escondido Mayor Paul McNamara and Poway Mayor Steve Vaus, but with a strong assist from Supervisors Kristin Gaspar of the 3rd District and Jim Desmond of the 5th District persuaded the SANDAG (San Diego Association of Governments) board to reprioritize some monies for the roads.

Before Friday’s vote the staff had proposed a set of priorities that moved a large share of funding from TransNet that had been approved by the voters for road improvements for Hwy 78 and Hwy 67 to mass transit. This had fomented something of a revolt among cities that were affected by the vote.

At Friday’s vote the board voted to include $600 million on a spending plan to could add new lanes to Hwy 67 and 78 and prioritize improvements for Hwy 52.

After the vote Gaspar commented, “The vote represented a huge win for our coalition. By allocating the necessary funds to the 67, the 78 and the 52, we have taken a big step in the right direction. I am cautiously optimistic, but we must remain vigilant to ensure our priority projects are completed.”

David Goodblatt of Encinitas was crossing Rancho Santa Fe Road near the intersection of Lone Jack Road around 6:45 a.m. on Sept. 23 when he was struck by a Toyota Tundra pickup driven by a 28-year-old man, according to information from the San Diego County Medical Examiner's Office and the county Sheriff's Department.

Posted by Encinitas Undercover at 6:33 AM 47 comments: