I am writing to set the record straight on the planned Cardiff Rail Trail after Encinitas City Council members Kristin Gaspar and Mark Muir recently wrote a letter about why they voted "No" on the Cardiff Rail Trail (which passed the Council 3-2 in May of 2015).

I am a member of the "Friends of the Cardiff Rail Trail", a group that supports the new trail along with the proposed at-grade railroad and road crossing at Montgomery Street. I created the yesrailtrail.com web site and its new sister site cardiffrailtrail.com.

While I respect Gaspar and Muir for going on the record with their opinions and the rationale for their vote, I am compelled to respond to some of the inaccuracies and scare tactics in their letter.

First of all, contrary to what Gaspar and Muir assert, the rail trail project enjoys a great deal of support in Encinitas. I know this because we have a list of nearly 900 supporters that grows every day. We have hundreds of strongly supportive emails, posts, and comments that are all attributable to actual residents (and these are not the automated form letters that Gaspar and Muir cite as overwhelming evidence of opposition). We also recently conducted an online non-partisan survey about the trail that was surfaced to 15,000 Encinitas residents and garnered several hundred responses. The bottom line from the survey is that Encinitas as a whole supports the trail with its east-side alignment by more than 2:1 and the community of Cardiff is in favor of it as well (albeit by a smaller margin than the rest of the city).

An e-mail from Mayor Gaspar and Councilman Muir to a group of residents who met with them about the Rail Trail:


The Coastal Rail Trail project is not new; it was originally envisioned in the late 1980s. Several prior councils recognized the negative impacts this project would have on our coastal community and, as a result, did not support it.

While some focus on the limited benefits of this project, such as encouraging people out of their cars and onto bikes, they fail to recognize the negative impacts associated with the project for the Cardiff community.

A primary reason citizens oppose this project is the change it would bring to this iconic area. The Cardiff rail corridor is the last undeveloped piece of coastal habitat in the area. It is an open space with a natural path and sandstone formations that is used regularly by joggers, pedestrians, dog walkers, children and cyclists. The rail corridor also provides parking to countless Encinitas beachgoers and those who stop to watch the sun set over Swami’s. The proposed project will pave over the natural path and line it with a 4 foot fence. It will also dramatically reduce beach parking. These changes dramatically alter the character and charm of this beach town community in an area where people frequently visit or have invested millions of dollars to buy property, presuming it would remain relatively untouched by development. As such, we believe that the Cardiff rail corridor should be preserved for current and future generations of Encinitas residents rather than developed.

To converse or not to converse, that is the question

Of note is Shaffer's quote: “I am tentatively supportive, but reserve final commitment until I see what the content is, because it could go either way.” One has to wonder whether her "could go either way" comment stemmed from the result of the recent forum she held with Mark Muir. Things there certainly did not go Shaffer/Muir's way if they were hoping to talk people into a HEU "yes" vote next year. HCD admitted to the crowd that affordable housing was not possible without (nonexistent) State subsidies and Habitat for Humanity said they could build homes but only on donated land.

Joe Mosca must have made a real impression on Sierra Madre during his brief time as council member and mayor there. Years later, an update on the re-launch of his political career in Encinitas immediately draws more than 50 comments.
Posted by Encinitas Undercover at 3:30 PM 101 comments:

Sheriff's deputies say the driver was heading north on Coast Highway 101 shortly after midnight when he hit two small trees on the side of the road.

The collision caused the truck to rollover on its roof.

At this time, it's unclear what caused the accident or whether alcohol was involved.

Long-time local favorite Mexican restaurant El Callejon has lost its lease and is leaving Moonlight Plaza at the end of January. The restaurant will reportedly open a new location in the Rancho Santa Fe village.

Wrong-way driver in fatal crash was Encinitas resident. The guy drove the wrong way on I-5 all the way from the Mexican border to Encinitas before killing two people. David Elmore, 29, had previous addresses both in Pacific Beach and at the Quail Pointe apartments at 924 Encinitas Boulevard. Elmore's Facebook page lists him as a bartender at Seasons 52, a chain restaurant chain with locations in La Jolla and downtown San Diego. 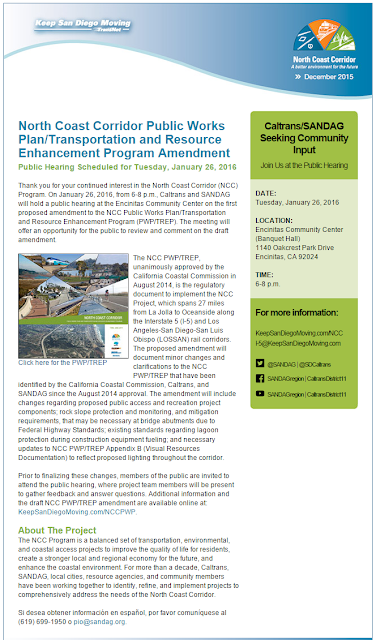 The meeting is about a number of changes to the plans for the I-5 and 101 area in North County, but most of the significant changes are about the Rail Trail and parking at train stations. More information about the changes can be found here.
Posted by Encinitas Undercover at 7:00 AM 13 comments:

Read all about it in the Seaside Courier:

Now, the city appears to be bent on making up for lost time with a series of out-of-the-box conceptual ideas in the new draft master plan for the downtown Village and Barrio — including undergrounding the train tracks with either roadway or a park on top.

The city is holding a series of meetings to present the draft master plan to the public for input. An “open house” for the public to view the plan was scheduled to be held from 9 a.m. to 3 p.m. Tuesday and Wednesday, Dec. 15-16 [...]

Posted by Encinitas Undercover at 9:28 AM 56 comments:

Please use the comments to record your observations.
Posted by Encinitas Undercover at 5:21 PM 3 comments:

Christmas brings out the best in some people. The worst in others.

Yesterday brought news of the Walmart layaway Santa. Today we learn about the other end of the spectrum of humanity.


The Sheriff’s department have arrested a man and woman who followed an Amazon.com truck in Encinitas on Tuesday and stole packages on its delivery route.

The truck was driving in Encinitas at about 3 pm, when its driver noticed it was being followed by a Dodge Charger, according to a news statement from the San Diego Sheriff’s department.

The driver then noticed one of the car’s occupants would get out of the car and take packages after he dropped them off, said the Sheriff’s department.

After observing this, the driver called 9-1-1 and kept their dispatcher updated, according to the Sheriff’s department. The deputies were then able to locate the vehicle and arrest the occupants.

The Walmart Santa was a local. The Amazon Grinches were from San Diego.

UPDATE: The thieves achieved international fame due to their carefully considered to-do list: 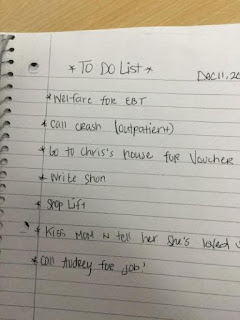 Audrey: I wouldn't hire this one if I were you.
Posted by Encinitas Undercover at 6:05 AM 12 comments:

The woman showed up at the store on Leucadia Boulevard Friday night with her husband and young daughter. She was wearing a shirt that said 'Blessed' and she paid off $9,000 worth of layaway accounts for nearly 50 customers. She asked to remain anonymous.

There could be fireworks at tonight's housing forum at the library. Some of the Prop A folks are on the panel, while the council's current plans would remove Prop A's public right to vote on upzoning.

Please post observations in the comments from your smartphone if you're there.
Posted by Encinitas Undercover at 1:02 PM 56 comments:

Please use the comments to record your observations.
Posted by Encinitas Undercover at 5:52 PM 13 comments: 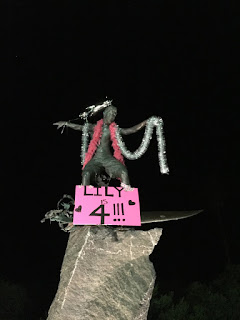 Happy Birthday, Lily!
Posted by Encinitas Undercover at 8:32 AM 5 comments: 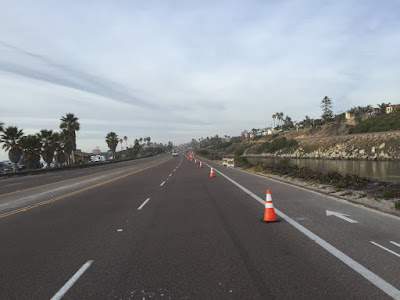 
Recent extreme tidal conditions appear to have eaten away part of the sandy bluff that supports Coast Highway 101, forcing the city of Encinitas to launch an emergency repair effort this week.

Two sections of the bluff on the east side of the highway, just south of the bridge and along the lagoon inlet channel, have eroded away, city Public Works Director Glenn Pruim said Monday. The larger of the two spots is 30 feet long and about eight feet deep, but it's the other, slightly smaller section that's even more worrisome, he added.

That's because erosion in that area has actually started undercutting the roadway, and the city has had to close one of the two northbound vehicle traffic lanes, he said.

Two of our Council members, Lisa Shaffer and Mark Muir, are hosting and moderating an important Housing Forum to address the question of how Encinitas can achieve a certified Housing Element.

The Forum will be held on Thursday, December 10, 7:00-9:00 pm at the Encinitas Library (540 Cornish Drive) in the community room. The proposed agenda is as follows:

We urge you to make a valiant effort to attend. We are hoping for a good turnout, so please come early enough to get a seat.

Thanks for taking an interest in the future of Encinitas.

Back in October, Encinitas Undercover received the following e-mail:

Filed a complaint with the City on Sept 18, given the run around...

Code Enforcement says its been bumped up to Planning. Its been over a month. Planning is unresponsive.

There was indeed a number of new BMWs filling the east side of the parking lot.   720 Garden View is reportedly owned by a well-known, politically connected developer, which could account for the lack of city action.

Investigating further, we found another surreptitious stockyard: the old Re/Max office parking lot east of Brett's BBQ on Encinitas Boulevard had been converted into BMW storage.

Is it against city code to use retail and office parking lots to store dealer inventory? We don't know, but as the city seems to have a rule and require a permit for just about everything businesses or residents want to do, we suspect there's a code against this.

Now this in the Coast News:


The city of Encinitas has come down hard on a local car dealership that constructed an overflow inventory lot on a vacant lot in New Encinitas over the Thanksgiving weekend without city permission.

The city issued a stop-work order and seven citations this week to Encinitas BMW, which put up the parking lot over Thanksgiving weekend, prompting residents along Quail Gardens Drive, who questioned whether a car lot could legally be constructed on the land, to complain to local officials.

“Doing so was in violation of a lot of regulations,” acting planning director Manjeet Ranu wrote in an email to city officials. “What BMW of Encinitas did is unacceptable. Staff’s approach will be very strong to compel compliance and remediation.”

As of Thursday morning, Encinitas BMW had removed the cars from the property.

2013's inspired Kook Nativity scene, and the subsequent Grinching, are included in the new Christmas in San Diego by author Bill Swank. 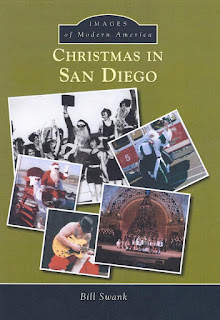 The book can be purchased here on Amazon, or you can get an even better price ($15, or $12.50 each for 5+ copies) direct from the author who will be adjacent to the Christmas dioramas at the Organ Pavilion in Balboa Park this Sunday, December 6, from 12:00-2:00 PM.
Posted by Encinitas Undercover at 9:24 AM 19 comments: