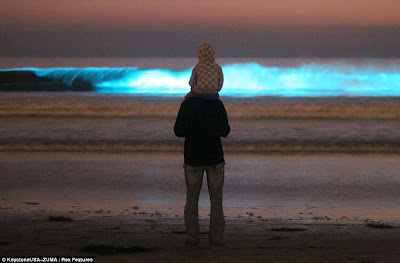 If you haven't seen the red tide at night this week, go now. Find a dark spot away from street and house lights.

The red tide is incredible. The whitewater of breaking waves glows a bright neon blue.

Photo from UK Daily Mail. This picture looks like it was taken with a long exposure. To see the effect best with the naked eye, wait until full darkness. You'll notice the brightest part of the glow moving along the leading edge of the breaking wave.
Posted by W.C. Varones at 5:24 PM No comments:

Encinitans speak out against Walmart 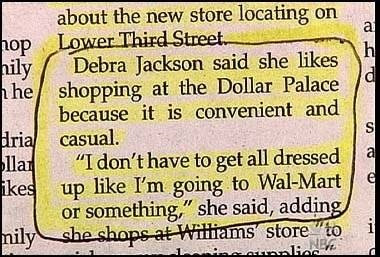 Some people may not like it, but Walmart has met Encinitas' code requirements and there is nothing city officials can do to revoke the company's permit to use the old Home Expo building, council members said Wednesday.

They made their comments after seven public speakers said Encinitas dropped the ball when it issued Walmart a permit Sept. 6 to use the building on the northeast corner of Leucadia Boulevard and Garden View Drive.

"Who's running the government here?" asked Walmart opponent Joann Hoffman. She said city staff members didn't make it easy for people like her to learn that Walmart had been issued a permit for the Home Expo site.

Also, she said, no one informed her that once that permit was issued she would have 15 days to appeal the decision. Fellow Walmart opponent James Cowles, who lives within walking distance of the Home Expo building, said it was "very telling" that Encinitas only grants people 15 days to appeal a building permit decision, while state law says that time span can be up to 90 days.

Teresa Barth has the key takeaway: it's all about the General Plan. If you think one Walmart is offensive, wait til you see what the Planning Department wants to do to all of El Camino Real. If you don't start showing up to every General Plan Update, don't complain in fifteen years when it looks like Irvine South.

My, how times change. I can remember when you had to drive all the way to Escondido or Kearny Mesa for a Target. Now we've got Target, Walmart, Big Lots, pawn shops, and check-cashing stores all right here in little Encinitas.

Coming soon to Encinitas: People of Walmart. And it's going to be walking-distance to Encinitas Ranch! That's got to be good for property values.

People of Walmart coming to Encinitas

Jon Horn has the story.

I wonder if they'll go for that upscale Walmart model or if we'll get the standard shotguns n' Cheetos version.
Posted by W.C. Varones at 8:11 PM 20 comments:

A bicyclist was seriously injured at about 12:45 this afternoon after being hit by a car at the intersection of Encinitas Boulevard and Coast Highway 101.

The bicyclist, identified as 40-year-old Todd Caullkin, was struck after he made a left hand turn in front of oncoming traffic on Encinitas Boulevard. He suffered serious injuries and was transported by helicopter to a local hospital for treatment, according to a statement released by the San Diego County Sheriff’s Department.

Sounds like the cyclist was at fault from media reports. There's a little confusion about his name. Other media outlets are saying "Todd Caulkin" with one L. Both spellings are uncommon and there are no people by either name listed in several online directories.
Given that the cyclist was turning left, he's not likely one of 101's Clown-Colored Men in Tights. More likely a guy on a cruiser headed to the beach. And given that he turned in front of oncoming traffic, he was likely distracted or inebriated.
Posted by W.C. Varones at 5:03 AM 1 comment:


Most Encinitans aren't even aware of the "General Plan" or the update thereof. The Powers that Be hope to keep it that way.

The General Plan is the document that defines whether or not you will have a four-story (or higher) apartment building built in your neighborhood. The "update" that the city is trying to sneak through is a developer's wet dream, removing height and density restrictions left and right and saying "To Hell with gridlock on El Camino Real and Encinitas Boulevard, we're building to the sky!"

The city staff, trying to pull the wool over residents' eyes, hasn't released a concise report of proposed changes to the General Plan. Instead, they've been sending out bullshit marketing pieces long on fluff and short on specifics.

The usual Greens and NIMBYs are obviously opposed to turning Encinitas into Irvine South. But this abomination of a General Plan Update is even drawing opposition from the New Encinitas Network, long thought to be pro-developer. NEN's Mike Andreen via LeucadiaBlog:

The City of Encinitas believes that the residents and business owners of NEW ENCINITAS have 'signed-off' and approve of this new general Plan 2035. We believe 99% of you never heard of this plan and certainly would not approve...

Should you choose to read the elements of the ‘draft’ General Plan 2035 for yourself? Here is a Link:
http://www.encinitas2035.info/Content/10040/DraftGeneralPlanElements.html

If the Leucadia Blog and Mike Andreen agree on this, there's something rotten at City Hall. Please call your elected officials, or better yet, speak up at the meeting.
Posted by W.C. Varones at 9:07 PM 6 comments: 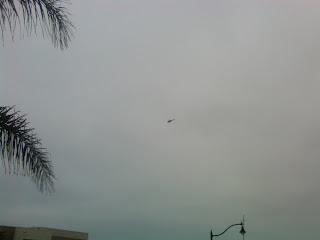 A woman accused of stealing $1 million in fixtures from an Olivenhain mansion that became known as the “Monster House” pleaded no contest Monday to a misdemeanor grand theft charge in Vista Superior Court and will serve three years’ probation and pay a $968 fine.

I'd imagine there are more courtrooms in Suzy's future. The Monster House investors can't be happy that she sold it as a rehab center when she didn't have the zoning for it. And then there's that whole "Suzy Tesla" thing. But I wouldn't bother suing her. I suspect it's blood from a stone at this point.

Cardiff ain't the only Kook in Encinitas!

Rally for the Madonna

Artist Mark Patterson will be speaking to the Arts Commission as the first step in the process of placing his gift of art to the city in a small park at the northwest corner of the intersection between Encinitas Boulevard and Highway 101. Eventually the city council will be voting on whether to approve the application. The five council members will need to know that the public supports placing the art at the park. However, because the land is officially part of Moonlight State Beach, the application will also need approval in Sacramento. And as I'm sure you know, politicians feel better voting for something that has strong public support. If you can't make it to this meeting, there will be another event when the matter is placed on the City Council agenda. Or you can send an email expressing your opinion to all the council members by using this address: council@cityofencinitas.org More information: http://www.signonsandiego.com/news/2011/sep/09/surfing-madonna-proposal-faces-wave-red-tape/

A little reminder that you need to be prepared, eh? 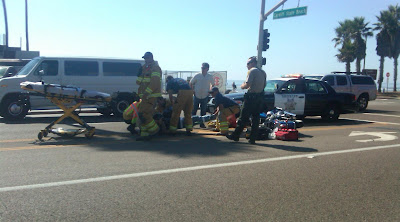 
You thought the Madonna would be put up on private property at Captain Keno's or Surfy Surfy? Not so fast. 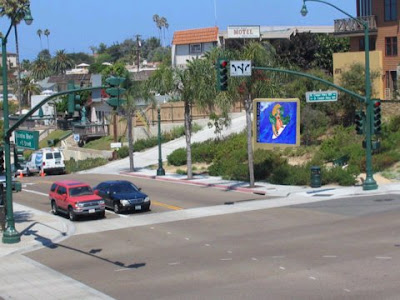 The artist and a nonprofit group will make a formal public art application to put the Madonna just across 101 from its original location, overlooking Moonlight Beach next to the Moonlight Lofts.

Jerome Stocks still goes on and on about the danger of having a "religious" image on public land. For Mr. Stocks' reference, I include the relevant portion of the First Amendment:

Congress shall make no law respecting an establishment of religion, or prohibiting the free exercise thereof;

Never has the Supreme Court held that displaying art that contains religious or cultural references is an "establishment of religion" by Congress or anyone else.

Funny which kook costumes the city leaves up 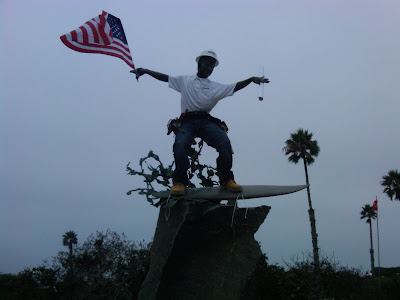 Today's Labor Day kook costume was put up Thursday night. It's a competent, if rather pedestrian, homage to American Labor. The city unions and their council lackey Jerome Stocks decided to leave it up for at least two days, and probably for the long weekend as well given city work hours.

Contrast that to the treatment the far more beautiful, elaborate, and creative Madonna Kook got. It was torn down by early afternoon of the same day it was put up. 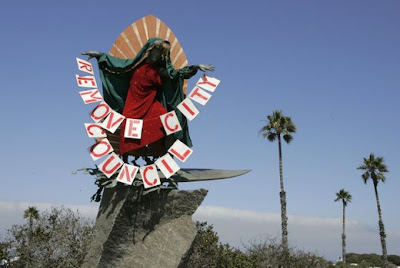 It's gettin' kinda sharky out there in Cardiff

Courtesy of our Cardiff-loving Carlsbad buddy Left Coast Rebel, this pic from yesterday at Cardiff, which has been authenticated as a great white by experts who talked to Channel 8: 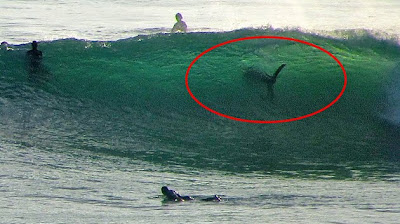 No mention of whether any of the surfers noticed it. Anybody hear?

Does anyone else find it oddly reassuring that this dude's been cruising up and down the coast for weeks and hasn't felt like chomping a surfer or a swimmer?