Encinitas' state representatives have a mixed record on high-density mandates

From the comments on Livable California's "Nine Bad Bills":


What is Assembly women Tasha's and Lorena Gonzales positions on these bills? Shouldn't we know now before we vote?

Encinitas' representatives are Assemblywoman Tasha Boerner-Horvath and Sentor Pat Bates. Lorena Gonzalez-Fletcher is not in our district but is the sister of Encinitas developer attorney, and good friend of Mayor Blakespear, Marco Gonzalez.


From Legiscan, here is how the three voted on the nine bills:


The 9 Bad Bills Were Approved by the Senate and Assembly. We Can Kill the Bills in July/August!

Each bad bill will be heard by just ONE committee in the “second house” before going to its “floor” for a vote in Aug. The legislature is doing a rush-job, but we can stop these awful laws.

Susan Turney is running for the District 2 seat (parts of Leucadia and Old and New Encinitas).

The first of what looks like a series of platform papers:


Sunlight is the Best Disinfectant (pdf)


Comet NEOWISE will come closest to Earth after sunset tonight, passing at a safe distance of 64 million miles. By the end of July, it will fade as it moves away from the sun and Earth, heading back to remote parts of the solar system.

Here are some tips to help you find it in the night sky before it vanishes.

Comet NEOWISE is so bright that it can be seen with the naked eye, but that doesn’t mean you’ll get a perfect view. Looking up from a dark place away from city lights about 90 minutes after sunset, “it looks like a fuzzy star with a little bit of a tail,” according to Space.com. Add a pair of binoculars or a small telescope, and the comet and its tail will be easier to spot.

Sounds like it's in the northwestern sky after sunset, but it's been cloudy at the coast the last few evenings. So you probably want to head inland a little bit.
Posted by Encinitas Undercover at 11:15 AM 20 comments:

Posted by Encinitas Undercover at 11:15 AM 13 comments:

Former Councilman Mark Muir –
FIRST RESPONSE: Did not directly admit nor deny involvement — offered newspaper articles and union mailers as “his” source of information. Answer to a direct question about his involvement is pending.

Muir probably didn’t do anything illegal, but it’s extremely sleazy. He apparently stayed under financial reporting limits to stay anonymous in hiring a known dirtbag to send out anonymous robocalls pushing dubious allegations against Phil Graham. And he didn’t stop the robocalls after those allegations had been officially discredited.

But this should make the Muirs persona non grata with the San Diego Republican Party, as they sabotaged the party-endorsed candidate and flip a Republican seat to the Democrats.
Posted by Encinitas Undercover at 5:35 AM 12 comments:

Wow! This should be the nail in the coffin of the Muirs' political careers.

If you do shady business with dirtbags, they just might rat you out to save themselves.


A San Diego man who’s facing a nearly $10 million fine for spoofing political robocalls defended himself Friday by identifying some of the people who he says hired him.

Kenneth Moser, a local marketing professional, told the Federal Communications Commission that he was working with relatives of Maureen Muir to help her bid for the 76th Assembly District race in 2018 against a fellow Republican, Phil Graham.

Two weeks before the primary, a woman accused Graham of battery. Despite the fact Graham was cleared of wrongdoing, Moser amplified the allegation by referencing it in a voice message to thousands of potential voters and by disguising the true source of the calls.

In the exhibits, Moser attached a short email in which Mark Muir wrote: “Under $800 … To Republicans.” The former elected official couldn’t be reached for comment.

Moser said his client wanted to remain anonymous, so they tried to take advantage of a loophole — as far as they saw it — in state law that doesn’t require the disclosure of independent expenditures under $1,000.

Moser has a long and sordid history in San Diego politics, and is known in Encinitas for profiting off of lawsuits over campaign filing errors.

Maureen Muir lost the Assembly election, but is still on the SDUHSD school board.
Posted by Encinitas Undercover at 5:13 PM 33 comments:

Simultaneous crashes on Cardiff 101 this evening

This first crash looks like a standard not-paying-attention rear-ender. Not visible in this picture is the white sedan this car rear-ended northbound near the Las Olas stop light. 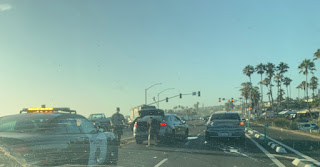 This one is more of a mystery though. This is southbound near where the parking ends and the Blakespear bike obstacles suddenly jog left toward traffic. This car took some serious damage to its left rear, possibly sideswiped trying to avoid the obstacles. 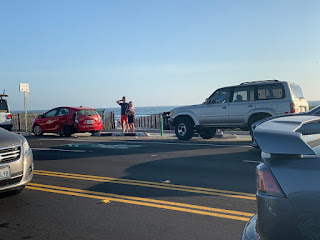 Situated along coastal bluffs and overlooking Grandview and South Ponto Beaches, Alila Marea Beach Resort Encinitas will be a luxury oceanfront hotel with 130 guestrooms, including 16 suites. Expected to open in early 2021, the resort will offer an ocean-view restaurant with rooftop patio, a pool with pool bar and an infinity-edge hot tub, a luxury Spa Alila and spectacular wedding and events venues, all with panoramic Pacific Ocean and lagoon views.


The developer of the Goodson project in Olivenhain has announced a virtual CPP meeting on July 23, 2019. The project intends to pack 283 for-lease apartments in 6.95 gross acres to create the tallest building in Encinitas.

We still have no idea if this is only the developer's opening gambit and he hopes a scaled-back version will placate the neighbors, or if he really wants to build this monstrosity now that Mayor Blakespear and friends have demolished the Prop A height limits.
Posted by Encinitas Undercover at 8:54 PM 35 comments:

There's a bright side to closing the beach parking lots.

From: City of Encinitas
Date: July 1, 2020
Subject: COVID-19 (Coronavirus) Update: How to Safely Celebrate this 4th of July

How to Safely Celebrate this 4th of July
State Beach Parking Lots Closing for 4th of July Weekend
To reduce the density at California State Beaches, the State of California has closed all State beach parking lots in Southern California for the 4th of July weekend beginning Friday, July 3 through Sunday, July 5. For Encinitas, this includes the San Elijo State Beach north day use lot, the Cardiff Seaside Beach, and Cardiff Reef parking lots. For more information, visit the California State Parksâ€™ Fourth of July Weekend Safety Measures page.
Restaurants, Bars, Breweries, and Wineries
Per the San Diego County Health Order, starting July 1, restaurants, bars, breweries and wineries must close nightly by 10 PM. Bars, wineries, and breweries without a food license, will be closed until further notice unless an arrangement with a neighboring food serving establishment has been made. Food can only be served to customers seated at a table and alcohol can only be consumed by customers ordering food.

Posted by Encinitas Undercover at 6:17 AM 54 comments: