Mr. Lindloff, 49, is sitting in his living room here in a city known as “surfer’s paradise,” about 25 miles north of San Diego. Surrounded by the playthings of his daughter — a toy oven, a doll house — he appears to be alone. In fact, he has plenty of company. With a hands-free headset, he is speaking to Steve Gomez, his partner in Today Trader, a two-year-old Internet venture that is “about helping traders find success through virtual technology,” as it says on the company’s Web site.

The company charges aspiring traders $199 a month for a live, real-time view of Mr. Lindloff’s computer screen, along with the running banter, commentary and advice that he and Mr. Gomez provide through the morning. (After lunch, it’s just Mr. Lindloff.) The service is billed as a chance to look over the “virtual shoulder” of two veteran stock traders, but you don’t really see anyone’s shoulder. It’s more like staring at the instrument panel of a jet while eavesdropping on the pilots, plus the ceaseless tap-tap of a keyboard.

[... Lindloff] says he has averaged somewhere between $100,000 and $120,000 a year for the last 10 years, even during the worst part of the Great Recession. With low expenses, he lives comfortably, though hardly extravagantly.

It's a shame the New York Times didn't do any verification of Lindloff's trading success (by looking at his tax returns for example). If he's actually earning that much consistently, that's a huge accomplishment. Most "day traders" either blow themselves up within a year or have some other income or assets that they live off while pretending to day trade for a living.
Posted by W.C. Varones at 3:41 PM No comments:

The sting operation was conducted in North County from 4:30 p.m. to 8:30 p.m. Friday with deputies, state Alcoholic Beverage Control agents and two decoys under age 21.

The decoys were posted in front of various stores and asked six customers to buy alcohol for them.

Three of the six did so, and were arrested, sheriff’s deputy Karla Taft said. She said one of the three also was arrested on suspicion of possessing a small amount of marijuana.

What kind of a fascist little shit would you have to be to go out trying to entrap people like this?
Posted by W.C. Varones at 4:16 PM No comments:

Murder at the Kraken

The North County Times has finally run a story about the death of a Camp Pendleton Marine after a February 27 Cardiff bar fight (mentioned here yesterday).

The NC Times adds that the location was the 2600 block of South Highway 101, which would seem to point to the Kraken (aren't those other restaurant/nightclubs across the street still closed?).

Encinitas Sheriffs seem to know who they're looking for and are just taking their time interviewing the fight participants to get the facts and build a case.
Posted by W.C. Varones at 2:45 PM No comments:

Odd that this hasn't received any local coverage as far as I can tell.

California police have identified suspects in the beating death of Marine Sgt. Thomas A. Elliott of Horseheads, but the lead investigator said Thursday that an arrest is not imminent.

Det. Kurt Cartie of the San Diego Sheriff's Department's Encinitas Station said "more than one suspect" is being sought as the investigation into the Feb. 27 incident continues.

Nearly four weeks after the incident in which Sgt. Elliott was beaten, police have not been able to find any witnesses other than people who were involved, Cartie said.

He said the trouble started when two groups left a bar at Cardiff-by-the-Sea, a community within Encinitas, at closing time.

He said the groups were walking across a parking lot to their vehicles when an argument developed and escalated into a fight. Sgt. Elliott and other Marines were in one group; those in the other group were civilians, Cartie said.

"More than eight" people were involved, he said.

Sgt. Elliott was punched and "the punch may have rendered him unconscious," Cartie said. He said the young Marine fell and struck his head on the pavement.

"His companions thought he was knocked out and drove him home" when the fight broke up, Cartie said.

Then they called 911, he said. When paramedics arrived, they called in an air ambulance that flew Sgt. Elliott to Palomar Hospital in nearby Escondido.

They just won't let you be 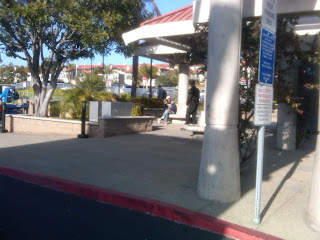 This lady at the train station knows her rights. As I was walking by, she was demanding the policeman's name.
Posted by W.C. Varones at 4:59 PM No comments: 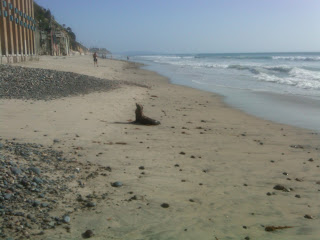 I started carrying my phone while running so I could take pictures after I saw a baby rattlesnake on the San Elijo Lagoon trails last month.

Are these guys regulars on the Leucadia beach? I haven't seen them much outside of La Jolla.
Posted by W.C. Varones at 4:35 PM No comments: 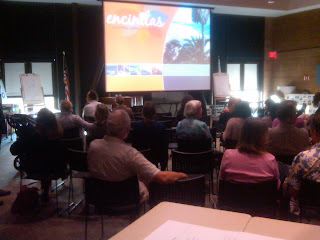 About 70 people showed up. It started with a brief intro from Mayor Dan Dalager and Patrick Murphy from the Planning Dept. Both of them came across as very likable, but Maggie Houlihan was the one who drew big cheers when she was introduced. Then there was a short presentation from urban planning consultant Daniel Iacofano about Encinitas' current characteristics and the process of doing the General Plan. 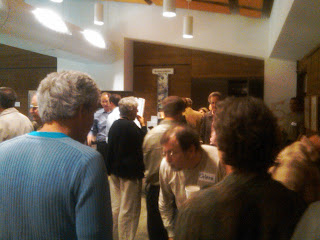 Then we broke into small groups give feedback on what we like about Encinitas and what we want to see in the future. It was one of those scenes from any workshop with a bunch of people throwing out ideas and someone writing down on butcher paper everything that was blurted out. There were a lot of motherhood statements and generalities. Most groups hit the same themes: unique character, environment, mom+pop shops, walkability, etc.

There's another meeting May 1 and one in October, but it's unclear how much room for community involvement there will be once they go beyond the motherhood statements and actually start writing the plan. It sounds like the "Advisory Committee" has already been selected. Let's hope they represent the community.
Posted by W.C. Varones at 7:41 PM No comments: 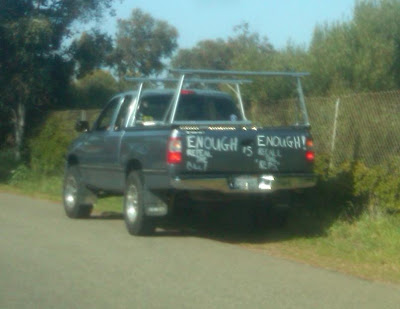 I love Encinitas!
Posted by W.C. Varones at 4:49 PM No comments: 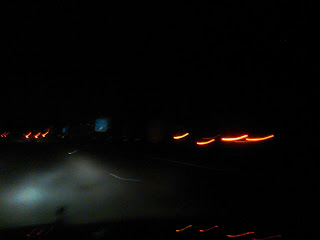 It was an overflow crowd early this morning as truckers lined up to take a turn at the notorious San Elijo Lagoon rest stop on I-5.
Posted by W.C. Varones at 5:27 AM 1 comment: 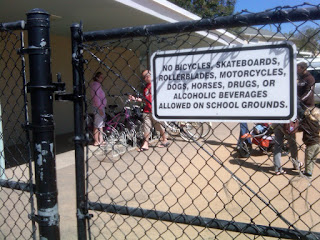 Do they provide skate ramps, beer openers, bongs, and dog houses near the bike racks?
Posted by W.C. Varones at 4:33 PM No comments: