Encinitas to blow $20,000 on satisfaction survey

... because city staff can't figure out how to use surveymonkey.com.


Encinitas plans a survey of residents on their satisfaction with city services, according to a U-T San Diego report.

The City Council OK’d the hiring of Encinitas-based True North Research to conduct the survey for up to $20,000, the U-T said Friday.

“It will have up to 30 questions and will include the answers of 400 residents reached by landline and cell phone. Residents not contacted will be able to provide answers online,” The U-T said. “The margin of error will be plus or minus 4.88 percentage points, a city staff report says.”

Here's a question to ask:

1) If the city didn't give workers huge pensions at 55 years old, it could:


If you have suggestions for additional questions, please place them in the comments.
Posted by W.C. Varones at 6:11 AM 12 comments:

A salesman I know from out of town recently planned to take some local clients golfing. He called his usual favorite course, La Costa, but it was booked for a tournament, so he asked for a recommendation. Apparently not wanting to send business to rival Aviara, La Costa recommended Encinitas Ranch. 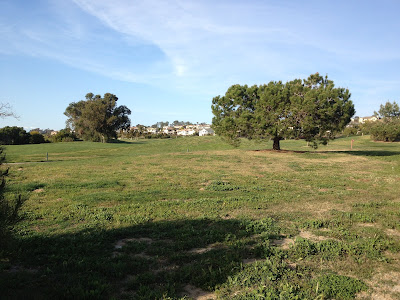 And how did the golfers like the Encinitas Ranch course? Here are some direct quotes: "embarrassing," "appalling," "a goat patch." They were amazed at the high-end price for a ratty course experience.

The Encinitas Ranch Golf Course is run by ERGA, the ill-conceived joint venture between the City of Encinitas and Carltas, the Ecke family development company. Thanks to that famous "conservative" financial planning by the city, they budgeted 70,000+ rounds of golf annually, every year. How's that working out for them? In 2009, they got 64,000. In 2010, they got 58,000. In 2011, they got 53,000.

With revenues dropping and costs rising, ERGA can't afford to water and care for the grass very well... which makes the course unattractive and drives away golfers, depressing revenues further. It's a vicious circle of bad planning.

Over at golf course rating site greenskeeper.org, someone from Newport had a similar experience in January:

Took the trip down to Enci Ranch to meet some buddies for a Saturday Skins match. Never played this track before but was looking forward to it. I don't mind paying $100 for a round of golf every once and awhile but paying $100 for this track is a complete joke. If I were the head greens keeper here I would be ashamed! The whole course was in awful condition. From the overgrown tee boxes to the dead fairways this whole track was just hard on the eyes! The greens were somewhat decent and the ocean views were nice. The rest of the foursome all had the same opinions of this place but there always is one bright spot on every course and that is the 19th hole. Nothing really special about this place either. Service was great but (2) $17 pitchers of brew made me double think why I would spend $117 at this awful golf course! 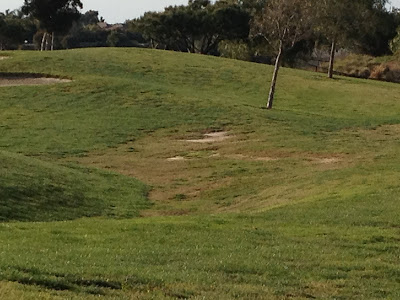 The Leucadia Blog is offline, replaced by cyber-squatters with paid links.
This type of thing happens when your web-hosting account is hacked, or you let your domain registration lapse and someone takes it.
The LB has been a great resource and forum for Leucadia and the larger Encinitas community. Let's hope it's back online soon.
UPDATE 3/22: They're baaaaacccckk.....
Posted by W.C. Varones at 8:27 PM 9 comments:

Assemblyman Martin Garrick has introduced legislation in Sacramento calling for placing the Surfing Madonna mosaic at the entrance to Moonlight Beach State Park in Encinitas.
On Thursday, the San Diego office of state parks denied a request by the city of Encinitas to place the 10-foot-by-10-foot piece on state land at the beach park. In its decision, the office cited a state Attorney General opinion that said placing the work on public property would violate the no preference clause in the California Constitution. The clause is interpreted that government cannot appear to favor one religion over another.
The mosaic depicts Our Lady of Guadalupe on a surfboard with the words “Save the Ocean” down the side.

Last week, Logan Jenkins wrote on how absurd the AG's anti-Madonna ruling was.

No one with a functioning frontal lobe can look at Leucadia artist Mark Patterson’s ocean-loving bolt out of the blue — or listen to him discuss his creative inspiration — and infer that the mosaic promotes Catholicism. Only a deputy AG doing the polka on the head of a pin could draw that delirious conclusion.

If you know anyone who turned Catholic after viewing the Surfing Madonna, please contact Encinitas Undercover.
Posted by W.C. Varones at 5:11 AM 6 comments:


In a meeting Thursday, officials from state parks informed Encinitas its request would be rejected largely on constitutional grounds.

Clay Phillips, the superintendent for San Diego state parks, said the agency received an opinion from the state Attorney General’s office last week that “clearly stated” that placing the Surfing Madonna on public land would violate the no-preference clause in the California Constitution. Essentially, the clause says displaying the piece at Moonlight Beach would give the appearance of government favoring one religion over another.

For the record, here is the "no-preference" clause of the state Constitution:


CALIFORNIA CONSTITUTION ARTICLE 1 DECLARATION OF RIGHTS SEC. 4. Free exercise and enjoyment of religion without discrimination or preference are guaranteed. This liberty of conscience does not excuse acts that are licentious or inconsistent with the peace or safety of the State. The Legislature shall make no law respecting an establishment of religion.

It's an outrageous leap to argue that a reference to a cultural icon in an artwork by an apparently secular artist, overwhelmingly beloved by a largely secular community, is somehow an illegal state "preference" for a religion to which neither the artist nor the vast majority of the art's supporters belong.

Time to burn down the historic Spanish missions, I guess.  And there are an awful lot of books that will need to be banned from the library.
UPDATE: Kamala rubs salt into the wounds by blaming Mark Patterson's blog comments. Apparently, if you defend your art in a Catholic online forum, that makes the art a state establishment of religion. I'm going to go discuss Kamala in a Catholic forum and see if we can get her thrown off state property.
Posted by W.C. Varones at 8:36 PM 14 comments: 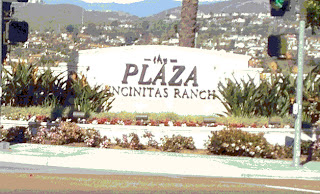 
"We're planning early summer of this year, so in just a few more months," spokeswoman Delia Garcia said as she discussed the future store's opening day.

The home buyers in Encinitas Ranch never got the new elementary school they were promised, but perhaps a shiny new Walmart will be some consolation.
Posted by W.C. Varones at 10:03 AM No comments:


Thanks to the well-organized New Encinitas Resistance Front (NERF), the awful Housing Element of the General Plan Update was killed Wednesday night. And the Berkeley consultant who looted Encinitas for $1 million was told not to come back.

Unfortunately, the council appears committed to pitting Encinitas neighborhoods against each other in a death match to determine who gets their neighborhood ruined with high-density development.  And the crazy thing is that none of this is necessary.

The whole development mandate is based on obviously bogus population growth projections from SANDAG. Yet our Machiavellian city council, one of them a SANDAGger himself, appear determined to keep using bogus numbers to claim that over-development is mandated by the state and we have no control over what happens in our city.  What better way to deflect voter anger and ensure re-election than turn Encinitans against each other?

Garbage-in, garbage-out.  Use realistic population numbers and give us a General Plan Update we all can live with.
Posted by W.C. Varones at 5:09 AM 8 comments: 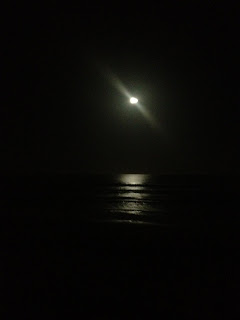 We're apparently the only city in the Coast News' coverage area with a rotten city council majority. Or at least the only one with citizens concerned enough to speak out about it.

Every article on the local opinion page in Friday's edition was about bad Encinitas government -- and so was the cartoon. 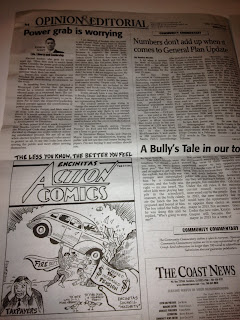 Andrew Audet and Cyrus Kamada both write on the council majority's mayoral power grab. And Denise Martin writes on the fraudulent numbers from SANDAG that are being used to try to force high-density development on Encinitas through the General Plan Update. You can read all three on page four of this pdf.

In the cartoon, local artist Mary Fleener comments on problems at the fire department -- and firefighters' outrageous pay and pension package.

Wouldn't it be nice to have a city council whose dirty tricks we didn't have to read about every week? I don't know about all the cities in the Coast News' coverage area, but both of our coastal neighbors Solana Beach and Carlsbad have passed pension reform, while our union-owned council majority of Jerome Stocks, Kristin Gaspar, and Jim Bond (with Mark Muir MIA) just gave firefighters a contract with a pay raise and a guarantee of no pension reform for four more years.


[EU note: reposted here because the Coast News does not have this online other than .pdf]

A lot [sic, I think the Coast News omitted a lead-off question] when it involves the draft of General Plan Update 2035 — the official document guiding the growth of Encinitas for the next 25 years.

The San Diego Association of Governments (SANDAG) is responsible for forecasting regional population growth, which Encinitas and other local governments use to decide how much new construction should be allowed in their towns. The Encinitas city planners, based on the SANDAG forecast, predicted that Encinitas’ population would increase 15.2 percent between 2010 and 2020.

This number — 15.2 per-cent — was used as the justi-fication in the General Plan Update to allow up-zoning that could result in the construction of 1,255 new apartments on El Camino Real, 847 on the Encinitas Blvd/Interstate 5, and another 280 apartments at the Santa Fe/I-5 Interchange.

Also included in the General Plan Update is changing current height restrictions (up to 40+ feet for grocery stores) and other exemptions that would lead to the citification of our town.

But the justification for all this building is fatally flawed because SANDAG’s estimate for population growth is outdated. Here’s a condensed version of a com-plicated situation.

SANDAG’s numbers were based on the 2008 California Department of Finance estimates, which were used to come up with 15.2 percent population growth. But the 2010 Census found the population of Encinitas increased only 2.6 percent between 2000 and 2010, and this slow growth will continue for years.

In fact, Beth Jarosz, senior demographer for SANDAG, made the following observations about San Diego County in a February 2012 article in The Union-Tribune: “Between 2000 and 2010, the 60-and-older population (in San Diego County) grew by 100,000 people. At the same time, the share of the region’s population under age 18 grew by only 1,000 people. With the first wave of the baby boomers turning 65 last year, we expect the region’s population to continue the aging trend in coming decades.

There are a number of other critical facts that the SANDAG forecast did not take into account: a major recession, an anemic economic recovery, high unemployment rates, a net migration out of California, and most important, declining birth rates. All these factors mean slower population growth for the foreseeable future.

So now that we know North County is likely to see low single-digit population growth for the coming decade — and not 15.2 percent — why still use numbers in the General Plan Update?

To continue promoting the General Plan Update in its current form makes no sense. Why scar the city with further developments if the numbers do not justify such aggressive growth?

If the Encinitas City Council is looking after the best interests of our town, they will rewrite the General Plan Update based on the most current census data and trends — and not on information that is seriously outdated. No household or business would make important decisions like this using such obsolete information.

We can still stop all this unjustified development. Visit SaveNewEncinitas.com and sign the petition to alter the General Plan Update.

Denise Martin is a new Encinitas resident.
Posted by W.C. Varones at 6:55 AM 1 comment: