A Vista Superior Court judge will hear arguments Monday on three lawsuits filed against Encinitas, the only city in the county that has not complied with state law to develop a housing plan.


[...] on the three lawsuits against Encinitas from the BIA/Tenants United and DCM [David Meyer]: the two from the building industry to force immediate adoption of Measure T were denied, with the judge instructing Encinitas to wait for the November election results and the DCM suit was just plain old dismissed.

The direct quote from the judge on the DCM was a question to Meyers' attorney: "Are there cases out there that say you get one vote and I can then ignore the initiative process?" No response, so obviously not.

Sabine was in the audience, not at the table arguing for Encinitas with Barbara Kautz (who apparently was quite strong). Meyer was there, as was Andreen.


City officials in Encinitas, California, have fined Peabody's Bar and Grill $3,000 after catching people dancing to live music performed there. Owner Brie Cardosa says she was surprised. She says she doesn't run a dance club but sometimes the natural reaction to music is to move around.

Posted by Encinitas Undercover at 8:37 AM 24 comments: 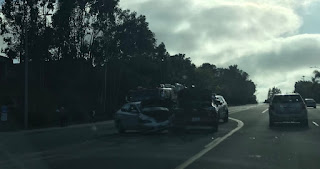 That middle turn lane is tough.
Posted by Encinitas Undercover at 6:15 PM 12 comments:

Clark Kenneth Baumgardner, the oldest living native of Leucadia, passed away peacefully at his home on Sunday, March 25th, 2018. He was the youngest child of Everette Lee and Mabel Florence Baumgardner. He was born in the "Homestead" our grandfather had built for our grandmother in the 1920s. A Spanish revival-style home, it still sits at the top of Hillcrest Drive in Leucadia; and is as pretty today as it was when it was first built.

The next hipster haven will be somewhere nobody expects. Maybe Encinitas. Can you not imagine all the hipsters caring deeply whether they live east or west of the five? Imagine the hipsters on the right (left?) side of the freeway not-so-silently judging the hipsters on the wrong (right?) side of the freeway; sort of how real life Encinitas people do, but with detached irony. It would start ironically, but the next thing you know all the hipsters are sporting yoga pants and board shorts, and complaining about “non-locals” taking up all the brunch parking. The future is now!

Posted by Encinitas Undercover at 11:47 AM 22 comments:


Originally, the tower’s opening was slated for Memorial Day weekend in 2017, but staff announced in April 2017 it would not be ready for several months due to weather delays, the discovery of lead, asbestos and an underground seawall that wasn’t anticipated. Summer came and went, and officials again delayed the opening until the fall.

The final price tag for the tower: $3.896 million, significantly higher than the $3.728 million price tag the council originally approved.

City officials defended the overruns and delays by pointing to the fact that the lifeguard tower won the 2018 American Public Works Association project of the year award.

“Please respond to this reporter. This might be a good opportunity to highlight the ‘Best Project Award!” Assistant City Manager Mark Delin wrote in an email to city staffers Brenda Wisneski and Stephanie Kellar asking them to respond to questions submitted by The Coast News. 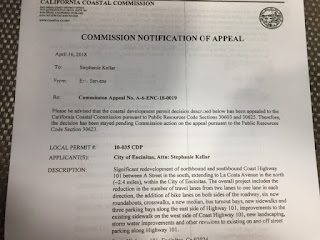 Posted by Encinitas Undercover at 9:56 AM 30 comments:


Deputy Mayor Joe Mosca — who motioned to remove the “L-7 property” near the conclusion of the April 18 meeting after the council voted April 4 to include the land in the city's draft housing element, which was sent to HCD on April 13 — said he met with a number of residents who were concerned the parcel wasn't ideal for access to mass transit and wasn't near retail space, which would cause more traffic congestion.

But Mayor Catherine Blakspear and Council member Tasha Boerner Horvath argued L-7 was the only piece of city-owned, residential land available and therefore the city's "only real shot" at getting deed-restricted affordable units.

Blakespear added she was concerned the vote would add credibility to existing litigation against the city. Encinitas is the subject of three lawsuits regarding the lack of its housing element. A hearing for the lawsuits is scheduled for April 30.

Because the housing document had already been submitted to HCD, Boerner Horvath said she was concerned Encinitas would look like "fools" and the removal might negatively affect the city's 45-day window for review and comments from HCD. Currently, the city is scheduled to hear back from HCD by May 28, after the state agency approved a 45-day period rather than the typical 60-day.

Please use the comments to record your observations.
Posted by Encinitas Undercover at 5:50 PM 20 comments:


The Encinitas Local Coastal Program (LCP) reflects the California Coastal Act of 1976. The Leucadia 101 Streetscape project is inconsistent with one or both in these ways:

• On page 4, the city of Encinitas Planning Commission Resolution No. PC 2018-12 states that “the project is not located between the sea and the nearest public road.” That’s erroneous. The project is in the first public road for the half mile of Highway 101 from La Costa Avenue to Grandview Street. It proposes to reduce that half mile from four lanes to two and install four roundabouts in it. Three of the four would be one lane. Those factors alone would restrict beach access at the Grandview stairs. By choking southbound traffic in the first public road gateway, the project would also restrict beach access south of Grandview.

• One of the stated purposes of the project is to reduce traffic volume on Highway 101. It proposes to do that by shrinking nearly 2.4 miles of highway from four lanes to two and by installing six roundabouts. Five would be one lane. Fulfilling that purpose with those features would inherently restrict beach access. The project would discourage visits to the beaches by non-residents and slow visits by residents.

The city recently held two "stakeholder" meetings on housing that were not noticed to the public and attended by staff, consultants, and developers.

Recommendations coming from the meetings include raising the height limits to three stories and 37 feet, and reducing parking requirements.

Details on the attendees and recommendations can be found in the agenda report for this Wednesday's council meeting.

Posted by Encinitas Undercover at 8:04 AM 71 comments:

Parcel L-7, the object of opposition from dozens of neighbors speaking at the council meeting last night, is still in the plan. The property is north of the EUSD Farm Lab on the east side of Quail Gardens Drive.


A controversial piece of city-owned land will be included in Encinitas' proposal to the Department of Housing and Community Development (HCD) after nearly four hours of debate between residents and city officials at the April 4 City Council meeting.

The council voted three to two, with Council members Tony Kranz and Mark Muir dissenting, to keep the “L-7 parcel,” at 634 Quail Gardens Lane, on the list of properties to be included in the city's draft Housing Element Update, which it will send to the HCD on April 13 for a 45-day review period. Also included on the list of 16 properties are the Dramm and Echter farm — which has been proposed as an "agrihood," a neighborhood built around an agricultural property, and was formerly suggested as a cultivation site for marijuana — and the strawberry fields on Manchester Avenue.

Please use the comments to record your observations.
Posted by Encinitas Undercover at 6:42 PM 32 comments: