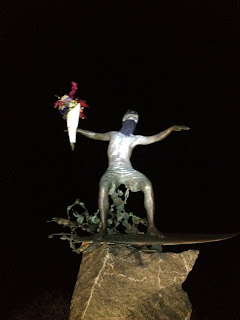 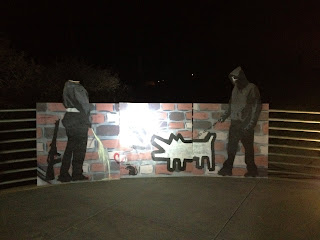 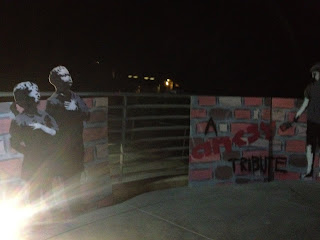 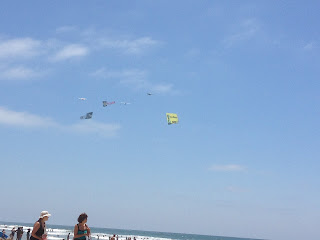 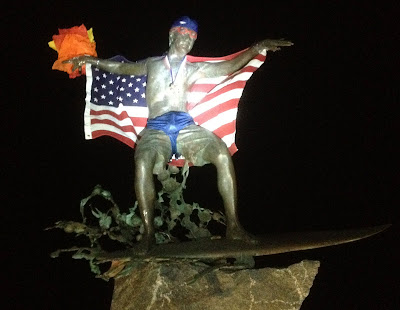 Is that a relay baton in your pocket, or are you just happy to see the Swedish women's soccer team?

... or so I hope.
Okay, here's what we know about the gas smell today.
1) It came from the west -- either in the ocean or above the ocean. With a strong onshore breeze, it was noticed right at the coast, all along the coast.
2) It hit a huge area with significant concentration for a fairly brief time, suggesting it was more of a single event than a long release.
For these reasons, I discount the official explanation put forward during a similar stink two years ago that it's decaying vegetation around the lagoons.
I also discount the military fuel dump explanation. If the military were to dump fuel far out at sea, it's hard to imagine it staying so concentrated over such a great distance and then dispersing so quickly. The amount of fuel that would have to be dumped a few miles offshore to produce such an intense and widespread effect would be staggering.
And it's hard to imagine any other polluter dumping that much of anything out in the ocean that wouldn't be instantly detectable by coastal authorities.
That would seem to leave only natural causes from the ocean. One possibility is a release of gases from beneath the sea floor.
But I am most intrigued by the possibility that the smell was a release of organic gas from the ocean itself. Years ago, I heard about semiannual turnover of the ocean surface water near the shore. That may have been an old surfers' legend, but there are many temperature-related effects that bring layers of warm or cold water (thermoclines) up or down -- read more on those here. Today's event and last year's both occurred in the heat of the middle of summer. I suspect something caused a turnover of thermal layers offshore, and brought some organic matter from below to the surface, where it interacted with the air and the hot sun and -- stank.
Anyway, that's a better theory than someone testing airborne chemical or biological weapons on us.
UPDATE Wednesday morning: A tipster tells us there's a green tide today... which would support the theory that this was a thermal turnover event suddenly bringing organic matter up from below... or an eruption of undersea gas could have stirred up microorganisms... or caused microorganisms to blossom.
Posted by W.C. Varones at 8:29 PM 3 comments:

This afternoon at about 5pm, an odor washed over Encinitas that was strong enough to make people worried about a possible gas leak at least as far as from the Ecke YMCA to the coastal corridor.
Witnesses reported a chemical smell that was similar to natural gas, but lacked the distinct onion smell of natural gas.
There was an onshore breeze, so the origin of the odor is likely west of I-5. Fire engine sirens were heard near 101 at the time.
UPDATE: Google hits are coming in searching for news on the smell in Cardiff and Solana Beach. This is big.
UPDATE: A similar odor was reported over a wide section of coastline last August, and investigators still don't know what it was. UPDATE: Pet theory here.
Posted by W.C. Varones at 5:23 PM 13 comments: 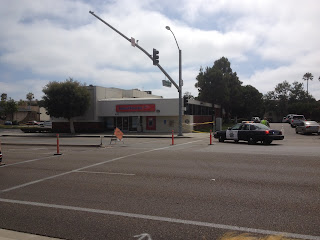 Highway 101 is closed at the B of A at Dahlia. The entire parking lot is taped of with crime scene tape. There are sheriffs at all corners.
UPDATE: Nope. Everybody panicked over a piece of junk left in the parking lot.
Remember, folks, there's a terrorist under every rock. If you see something stupid, say something stupid.
Posted by W.C. Varones at 3:37 PM 1 comment: 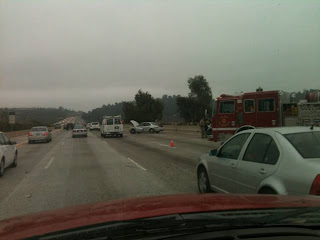 ... just in time for your morning commute past the fairgrounds.

And the lion shall lie down with the lamb

Cranky ol' W.C. rarely has anything nice to say about our city council, but I have just had the pleasure of watching the video of last Wednesday's city council meeting.

Witness the civil, even friendly, interaction between our council members, as they come to unanimous agreement on what appears to be in the interest of not just city staff, but the majority of public speakers and the Encinitas public in general.

See, for example, the friendly banter between Kristin Gaspar and Teresa Barth at 01:28:30, less than a year after Gaspar's bizarre and baseless tirade against Barth.

I am genuinely pleasantly surprised. None of the council members displayed any of their frequently visible hostility toward each other, and Gaspar appeared significantly more capable and competent than she had appeared in the "recusal" faceplant.

Could this new civility be related to the absence of a certain divisive mayor?  Maybe we should extend this experiment for a few years.

Comic relief was provided by Grandpa Simpson, who first got his knickers in a twist that bicyclists passed stopped traffic on the right. See the video at 01:04:00:


Excuse me, Steve [his name is actually Pete], before you leave, I have a question, ah, an observation. You showed the example of sharrows on a two-lane road which hasn't worked out swimmingly. And I'm wondering with regard to education, goes both ways. On a two-lane road, in the summertime, near the coast, gets crowded, stopped. The bikes can have the full lane, but I've seen bikers choose to go between the cars that are parked and between the cars that are moving slowly in that two-lane road, where they are putting themselves in door danger if you will. Is there some education on the part of the biking community to say, "hey, you may have to wait in traffic like everybody else on occasion?"

Um, no, Grandpa Simpson. Bicyclists are allowed to pass stopped or slowed cars on the right.

I can just hear him sitting in traffic in his Oldsmobile: "Dadgummit! Those pesky kids on their new-fangled velocipedes are going to get to the 7-11 before me!"

Grandpa then reiterated his point before calling Pete "Steve" again.

Then at 01:29:50, Grandpa kept worrying that drivers would completely ignore lane markings and keep driving in two lanes even though a single lane would be clearly marked. Have you seen widespread cases of drivers ignoring lane markings and driving on the shoulder in Southern California? I haven't. Grandpa goes on at some length on this issue.

I kid Jim Bond, but we owe him a debt of gratitude. He was the lone voice on the council to vote against the Great Jerome Stocks Pension Giveaway of 2005, which will haunt Encinitas finances for decades. Thanks for your service, Jim, and happy retirement.
Posted by W.C. Varones at 9:48 PM 5 comments:

An epic fisking of the city's rainbows-and-unicorns financial spin at the Leucadia Blog.
Posted by W.C. Varones at 8:30 PM 5 comments:

Photo courtesy of Coast News.
Posted by W.C. Varones at 5:17 AM 8 comments:

CalPERS earned 1% on its investments in the fiscal year ended June 30, 2012.
1%, as you may know, is considerably less than the 7.75% they promised and for which Encinitas taxpayers are legally liable.
But there's no problem as long as we keep making the minimum payments, right, Jerome?
Posted by W.C. Varones at 12:06 PM 22 comments:

We noted last month that Encinitas, like all broke cities, was turning its peace officers into revenuers with BS parking tickets for Cardiffians parked on their own property.
Steve Amster, owner of El Camino Real's Garden State Bagels, caught a revenuer targeting drivers with a radar gun, and ran him off his property.
Too few citizens stand up to authorities when they no longer protect and serve but intimidate, bully, and raise revenues to feed their own fat pensions. Please stop by Garden State Bagels this weekend, pick up a dozen, and thank Amster for standing up.
Posted by W.C. Varones at 10:36 AM 7 comments:

So much for that "strong financial condition" we keep hearing about

Encinitas will have to borrow even more money to build the Hall Park. Borrow, borrow, spend, spend... What could possibly go wrong?
Posted by W.C. Varones at 1:08 PM 4 comments:

Encinitas gangster genius: commit armed robbery, and then stay at the scene of the crime wiith the weapon until the sheriffs arrive.


The group had just gotten out of a vehicle when Hernan Cruz allegedly pointed a long-barreled gun at them and demanded they turn over their wallets and other belongings.The victims complied, and the masked robber told them to leave, Strohl said.They did so, then made a 911 call once they were out of sight of the thief.

Deputies fanned out through the neighborhood and found Cruz in a yard near the scene of the robbery, along with a loaded shotgun and ski mask, Strohl said.


If the 800 block of Clark sounds familiar, it should. That's where an alleged gang member was beaten two years ago with a baseball bat by a bunch of guys in a pickup. The "victim" in that case was 18 years old at the time, and Hernan Cruz is now 20, so you do the math.
Posted by W.C. Varones at 6:39 AM 24 comments: 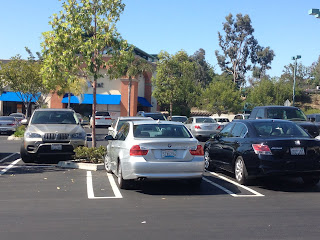 Not a lot of cars at the Encinitas Ranch Walmart on a Saturday morning, but a lot of those that were there were BMWs. A Hummer too.
Posted by W.C. Varones at 4:31 PM 5 comments: