Amid residency doubts, a private investigator hired by a local teachers union tailed the president of the San Dieguito school board at least twice to see if she went home after board meetings.

Instead, Maureen “Mo” Muir, the two-term board member, drove to hotels, including one in San Marcos, said Duncan Brown, president of the San Dieguito Faculty Association.

Brown said union money — he wouldn’t say how much — paid for the private eye.

Real estate sites show the Muir home having been listed for sale in 2019, and having a sale pending as of last week.

The Muirs burned a lot of bridges in the community and in their Republican Party with Mark Muir's dirty tricks robocall against fellow Republican Phil Graham in support of his wife's state assembly run.

After controlling the school board for years, the teachers' union now finds itself without majority control, and is attempting a recall of newly elected trustee Michael Allman.

Posted by Encinitas Undercover at 7:57 AM 12 comments:

Despite this obvious warning posted for those logging in to court proceedings, Tony Kranz both recorded the Prop A hearing and posted them to his website.

Calling it a "bootleg" copy, Kranz went on to offer up his personal prediction on the outcome of the case: My Weblog — Tony Kranz. 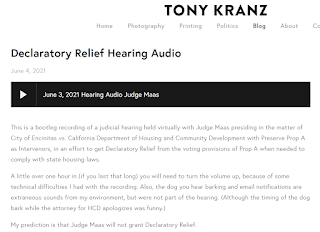 Posted by Encinitas Undercover at 10:45 AM 50 comments:

The 2021 Regional Plan is a 30-year plan that considers how we will grow, where we will live, and how we will move around the region.

Mobility Hubs are communities with a high concentration of people, destinations, and travel choices. They offer on-demand travel options and supporting infrastructure that enhance connections to high-quality Transit Leap services while helping people make short trips around the community on Flexible Fleets. Mobility Hubs can span one, two, or a few miles based on community characteristics and are uniquely designed to fulfill a variety of travel needs while strengthening sense of place. 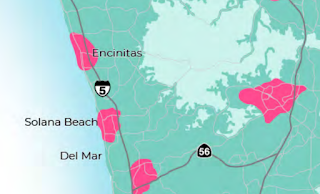 A healthy mix of land uses, including jobs, housing, shopping, and recreation, supports a variety of community activities.


Prop A goes to court this Thursday - June 3! The mayor is asking the judge to invalidate your Prop A Right to Vote on high density housing and silence your voice.